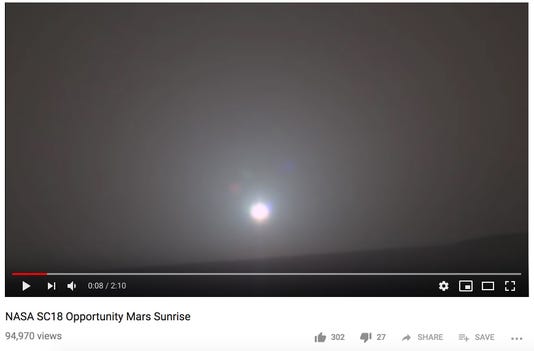 A photo collected by NASA's Opportunity rover has been transformed into a 2 minute musical composition by U.K. scientists.

Domenico Vicinanza, the Anglia Ruskin University research group, said that the process they used was a "truly flexible technique to explore science" and can be used to study the surfaces of the planet and the atmosphere, as well as # 39; the weather and the discovery of volcanic eruptions.

The dark background of the picture produced soft, slow harmonies while the thriving areas resulted in higher sounds, according to news release.

The whole piece sounds how many might describe a sunrise: calm, quiet and very simple.

Vicinanza, together with Genevieve Williams, from Exeter University, presents the piece, called "Mars Soundscapes" at the Supercomputing SC18 Conference in Dallas, Texas.

More: There is a supersonic parachute & # 39; NASA for Mars mission sets world record

NASA's Opportunity rover has taken pictures of Red Planet since 2004, but went silent in June when a dust storm broke off its solar power.