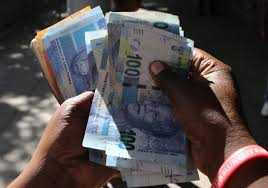 He claimed a newly arrived injury from South Africa, his relationship with a log, and died a few hours later following a row over R2 000 meant for a lobola that immediately went out of pockets, police confirmed yesterday .


Mlindisi Sibanda (29) of the Tsabanda area in Tsholotsho Mr Lungani Tshuma (23) pulled several times over his body over the missing money and died later at night.


The event took place about 3PM last Wednesday in the home of Sibanda. Ward councilor Pios Ncube said Sibanda, who is located in South Africa, has just arrived home when he committed the offense.

"On that day, the suspect contacted Tshuma to come home and helped to paint his house.


"Sibanda took some money from her pocket and counted in front of Tshuma. Then she put back the pocket of the trousers on her work suit and told Tshuma that he wanted to use it to pay a lobola, "he said.


Cllr Ncube said later at night, Sibanda moved his trousers and put on bed. He went to take some water in a nearby borehole which is about 30 meters away from the home leaving Tshuma behind.


"When he returned he could not find the money. He asked Tshuma who claimed that he had also gone out and had no idea what had happened to the cash.


"This disturbed Sibanda and raised a log and attacked Tshuma, hitting him all over the body and held two deep cuts in the head." Mr Kenneth Ndlovu was blocking the suspect and he gave the scene after hearing Tshuma's support, "said Cllr Ncube.


Mr Ndlovu ordered Tshuma to go home, but Sibanda refused to release her and said they would come together at home.


On Thursday about 7AM, Mr Ndlovu went to the suspect's house to check the state of Tshuma. He hit the door and opened Sibanda. Inside the house, he found Tshuma lying unemployed on the floor.


Cllr. No doubt the suspect drops out of the bedroom and runs to the Nkunzi Business Center where he got a phone calling his uncle in Ffigree.
"He told him what had happened and the uncle traveled to Qavanda. The suspect took the police," he said.


Spokesman for North Matabeleland Police Chief Inspector Siphiwe Makonese said the event.
He said the suspect was arrested and assisted the police with investigations.
"I can confirm that we have arrested a 29-year-old man from Tsholotsho who attacked another man for losing money.


"The victim died later during the night and he was found dead by his relative who came to check after he was stopped fighting earlier," said Chief Insp Makonese.
The victim was informed of the matter by the suspect's uncle, who had also surrendered the suspect to the police. Chronic