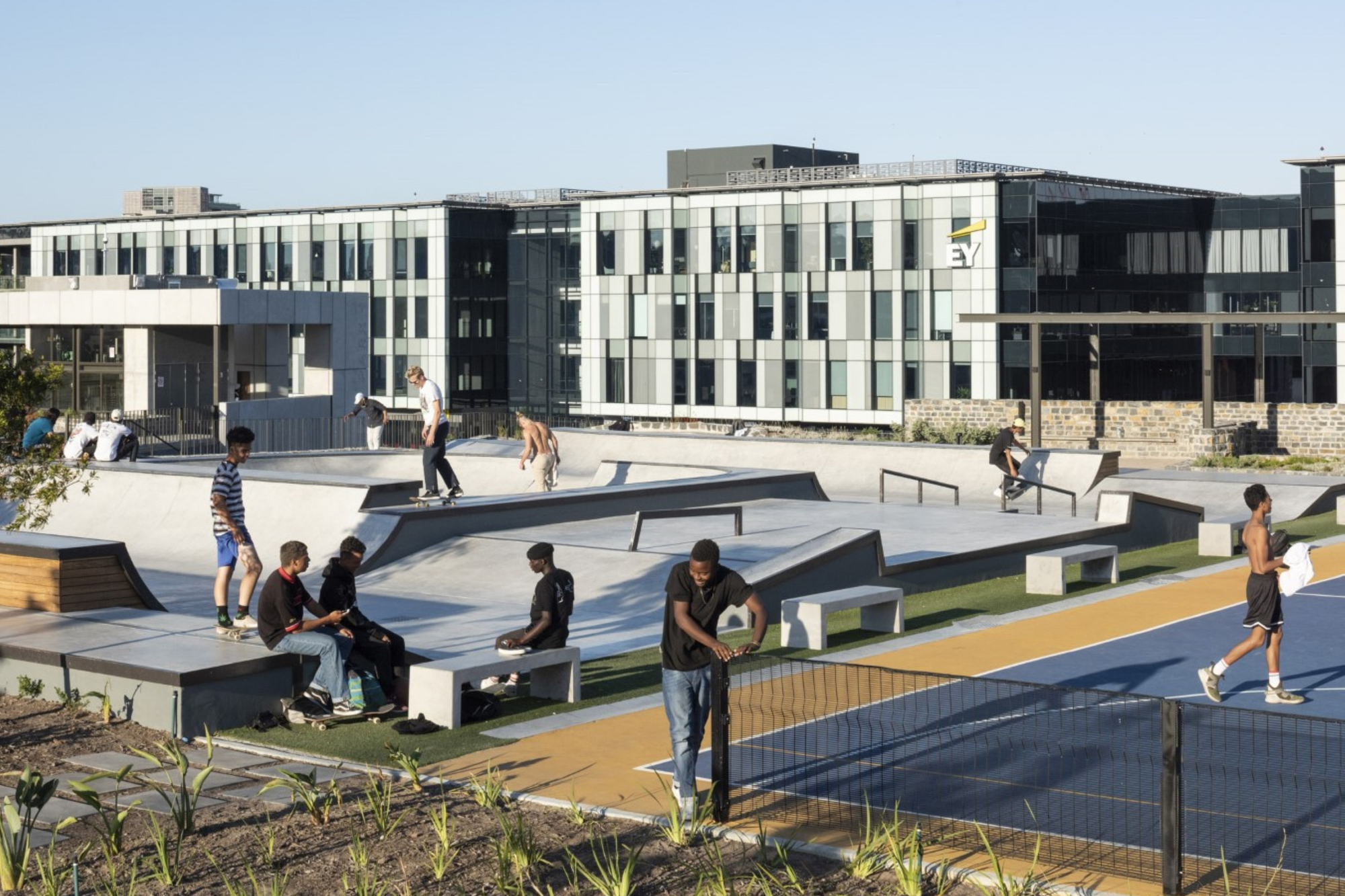 
A description of the text provided by the architects. Battery Park is a new 12,000 square meter (1.2 hectares) urban area located on a key gateway to one of Africa's most popular tourism, Waterfront and Rescue destinations in Cape Town, South Africa. Having developed as the nucleus of a larger urban vision for the area, the site includes a park and piazza that effectively hide the 1 206 bay parking facility as well as New pedestrian routes to stimulate the rotation with activity. The site is of archaeological importance as it contains the remains of one of the city's oldest structures, the coastal strengthening of the Amsterdam Battery. This gave a unique opportunity for architecture and an urban design company dhk – to pay homage to the historic note when incorporating a parking facility and providing places for leisure and leisure activities.

The project forms part of an urban design framework created by dhk for the Canal Class that has not been used, which will facilitate the reconstruction of the historic city center and South Waterkant V & A. The aim was to create an accessible public park that lies on multiple connection of new pedestrian routes that hit the new area to & # 39; the surrounding urban fabric and thereby helping to enrich the area.

The Amsterdam Battery was built by the Netherlands along the Cape Town coast in 1784 to protect the city from maritime and land attacks. In the 1800's the building was used to house prisoners, and it was remodeled and later strengthened by the British but in the end it was abandoned. In 1905 the battery was largely demolished to make way for rail connections with the port, leaving only a small part of back beer walls. The historic remains have now reached eight meters above the new canal that runs through the site at a lower level.

During the construction of Battery Park, old archaeological excavations revealed old data used to inform the design. The park built is stored at the inner courtyard level, while the edges of a plant above retail units on the piazza represent the natural object of land behind the battery. Various architectural and landscaping elements reflect the original footprint of the structure, such as semi-circular curved paths, backbone concrete additions, walls facing the canal and concrete structures – giving it visitors have a real sense of battery size. A visual axis connection to Cape Town Tower Gunwn on Signal Hill has also been preserved, protecting the site's historic viewing line.

The requirement to respect the original inner court databases and create a lower level piazza in a high park with views across the A & A and the CBD but with the challenge of managing the transition between the two levels. So, a large part of Battery Park's design concept was highlighted in breaking the barrier between the park and piazza and coming closer to each other.

As a result, the level of the park was designed to gradually lower the canal edge providing closer connection to the piazza, and in turn, the piazza gradually drops towards the canal. The vision was to create a scale between the two levels and to provide visual pieces for visitors; offering an insight into the park as they extend along the edge of the canal. This has also been achieved through different soft and hard landscaping elements such as large concrete staircases leading to the park, slopes and folding walls, and plants to remove the & # 39 ; r park above.

At the level of the higher park, visitors can explore landscaping gardens with stone plant trees and planners, sparkling paths with built benches, concrete skate park, basketball court and new pedestrian routes. Throughout the park and pyozza, steel pergolas gradually fits the design and provides a shade that needs a great deal. The lower piazza level consists of 11 boutique retail units that run the walls facing the canal and form an active eastern edge to the new canal pedestrian route.

The intention behind the piazza was to operate the canal through a range of water sports and provide a link between the V a A and the CBD – encouraging the pedestrian environment. Referring to the original facade of the battery, full stone gabion walls cover the parking facility and plant planters including mynbos and aquatic plants. All the stones used through the park and piazza were excavated from the site during the construction process. The oldest ancient elements synthesize contemporary attachments that refer to the battery rather than duplicate its heritage.

The palette materials contain a selection of hard materials suitable to the firm nature of the park, namely concrete, stone and steel. Concrete was chosen as a "material of time" for new structures, which can be clearly distinguished from historical elements, and there is very little misinterpretation. The concrete panel structure has predicted to name interpretation pavilion have built to the estimated height of the original battery walls and connect the park, piazza and a parking facility through internal elevators.

To be similar to cannon malls, three small openings are part of the canal wall facing the canal. Historic Cannons of Amsterdam Battery found across the A & A by the South African Cannon Society and keeping for the park's development have now been displayed inside interpretation pavilion. The artifacts sit on top of the finished concrete pieces, made to be similar to old wooden canon vehicles, allowing them to fight through the ships and overlooking the canal.

Director and director of the project, Pierre Swanepoel, said, "The intention was to facilitate a new focus of activity in the V & A area, respecting the Amsterdam Battery heritage, once instead of extinguishing and burial , but now public space has planned to support and take part in the main community of Cape Town ".