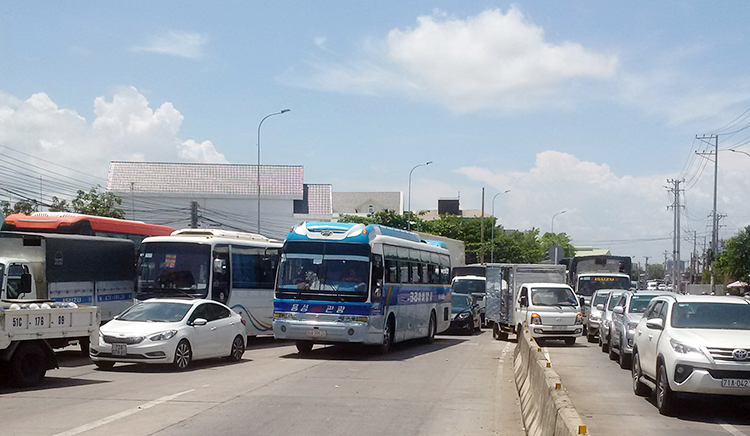 By Vam Cong bridge to enter the province of An Giang, the drivers run on a BOT Highway 91 project a few hundred meters but they have to pay the whole path.

On May 21, many drivers continued at BOT T2 station on Highway 91 (Thot Not District, Can Tho City), going from An Giang Province to Can Tho City, to respond to the unreasonable charge collection. .

The drivers said that their vehicles ran from An Giang to a Tea T junction, turn into Highway 80, and then accumulate a Vam Kong Bridge to Ho Chi Minh City. The distance they use Highways 91 is only about 300m but they have to be bought at Station T2 BOT, paying for the entire route about 50 km to the center of Can Tho City.

"My truck is 18 tons, carrying goods from Saigon to An Giang regularly. Previously, the ferry lost 120,000 VND. Now there is a free bridge, but when the car runs back and forth, there It costs 140,000 VND, even if only a few hundred meters are used, a BOT project is too ridiculous, "says a driver.

After being explained by the executive forces of Can Tho City, the drivers are leaving. The event lasted about an hour, causing local traffic congestion.

"The response to the legal rights of the people in this case is too true," said Department of Transport director An Giang and he was expecting the drivers to calm down, waiting for the Ministry of Transport to solve it. .

Investment project to upgrade and upgrade National Highway 91 in BOT form with investment capital of more than 1,700 billion VND. On the project, there are two toll stations including T1 located in the Anglesey area and T2 station in the Thot Not area – near the province of An Giang. These two stations operate in 2016, the level of 35,000-200,000 VND, the collection time is over 23 years.