People on the mountain 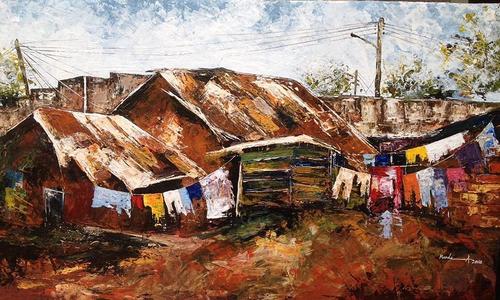 Look at pictures of colleagues sent home, roof and grind, columns, walls and furniture that live in disorder, in rocks and sandy soil, and the body … I can not believe it is Mount Nui , Nha Trang.

Two years ago, I used to visit this village to report on the progress in solving the difficulties and lack of people. Hundreds of Mountains are hundreds of tiles located on the side of the island. The house was called to, because they are only wooden boards, canvas, plastic, which are associated with some twisted wooden columns. Most people are bad workers, they have come back from the four addresses, income is uncertain based on the sailors and labor workers.

All neighborhood routes are full of waste. Few under the self-made pillars, honeycomb rust, wire core, children continuously playing next door. Traffic established by wooden boxes is protected through the ditches and ditches. Older children are dressed up temporarily, a nupy baby carries a couple.

These scenes are completely unfamiliar with the luxury destinations in the city with the highest urbanization speed in the country. I travel a lot, I have not seen anywhere in the Vietnam country of Nha Trang construction speed. Buildings, apartments, high class hotels, resorts rise every month along the coast, the banks of the Afon Cai and coastal slopes that surround coastal cities such as Hon Ro, Tien Co …

In the mountain village, people told me that they did not expect just to ask the government to reduce electricity and water prices. Mai Thi Suong, a woman who lives in a neighborhood of almost 20 years, admits that all electricity had bought by one "supplier" in the neighborhood for 4,600 dm per kWh of electricity and 17,000 dong per cubic meter of water. Average price for city residents. He said the electricity price was so high that there were many families in the neighborhood debt. Many are thinking of ways to do toilets because of the need to save water, there are no savings homes that let children go to the school.

Although a residential management story for the people in the Mountain has been used for over a decade, it was reported in an unexpected way in the morning of 18/11.

People say that houses have fallen rapidly since the start of the water that flows. Within heavy rain hours and mountain slides, the paths turn into waterfalls. Hundreds of homes become mess of furniture, furniture, tiles, … and many people are buried.

Due to another landslide in the Vinh Hoa ward, Nha Trang, where the construction of a mountain lake, a water bomb, had a devastating effect on the people, a representative of the government said: If the ward heard the report, She does not know she's wary of her children. "Nha Trang City Chairman explained that" where the landslide dies the city's forecast points are not, so when the event happens local government does not stop. "

Many years ago I was recounted from catastrophic areas, I was familiar with the words, "do not know", "unexpected", "beyond imagination", "not up". Local management in front of correspondents.

I recall that when the authorities in the ward in the other area gave a presentation on licensing new project projects, how many visitors they expected, how much needed to be built to meet visitor demand. .

But for the city's residents, the idea that "unreasonable" in their own cities is still a symbolic move in a decade away. The relocation, which was recorded by the city leaders alone, included a call for "bad" yesterday, after all it became a great tragedy.