Penalty for not wearing a seatbelt: The law must be laid Law 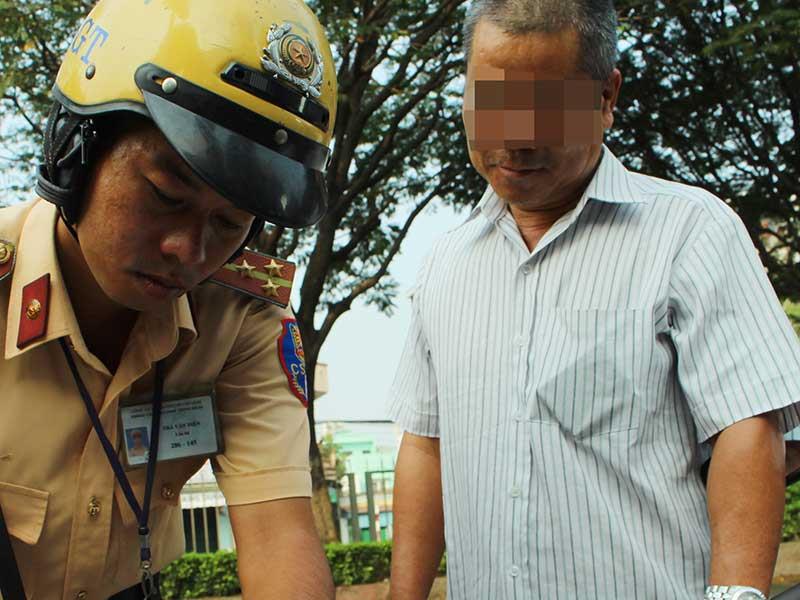 From March 17, Ho Chi Minh City Traffic Police will use troops at the same time to treat drivers, people who sit on cars in the premises that have seat belts but do not tighten (including front row seats). and rear seats) by Decree 46/2016.

Equipped with a camera to punish

Ho Chi Minh City Law After raising the views of Captain Cao Duc Thinh, Deputy Head of the Traffic Police Advisory Team at Ho Chi Minh City Police Department, said the driver's perception of the person sitting in the car about the danger of not wearing seat belt. limited.

A nucleus of a police officer (belonging to CSGT Rach Chiet, Ho Chi Minh City) said the police had to prove non-wearing seatbelts when the car was running, which was to use a camera to be the basis for punishment. violator. Lieutenant Nguyen Minh Quang (Ho Chi Minh Traffic Police Team, Ho Chi Minh City) said the first time will remind those sitting in the back row of the seat, if it is repeated, it will be treated strictly.

It is worth noting that the regulation on car seat belts in the Road Traffic Act 2008 and the Government Decree 46/2016 (allowing administrative offenses in the field of traffic and rail safety) is available. warping.

In particular, Clause 2, Article 9 of the Traffic Protection Law states: "Cars with seat belts, drivers and passengers in front seats in cars must wear seat belts." However, according to Point k, Clause 1, Article 5 of Decree 46, a fine of VND 100,000-200 thousand will be the act of failure to wear a seat belt (in a position with a seat belt).

Awareness of 4 car drivers and passengers about the risk of not wearing seat belts is limited. Photo: HTD

Need to add to the law soon

Dr. Thai Thi Tuyet Dung (Law University of Ho Chi Minh City) argues that there is a conflict between the decree and the law. Clause 2, Article 156 of the Law on the Publication of Legal Documents, states that if legal documents contain different provisions on the same issue, the legal effect of the document will apply.

That is, the base of the Traffic Police on Decree 46 to punishment is not fixed but must be allowed under the provisions of the Law on Traffic Prevention and Control 2008. However, Dr Dung said that he fully supported the regulation of all those who are not. sitting on the vehicles in the venue. A seat belt must wear a seat belt. Therefore, this progressive regulation needs to be added soon to the law.

According to a lawyer from the Ho Chi Minh City Bar Association, Article 9 drafted the Law on the revision and addition of the 2008 Law on Special Traffic Law, which is being consulted on in accordance with the provisions of Decree 46. In particular, the improvement of traffic rules in accordance with signs and road signs, traffic traffic convention (two Vienna conventions) and regulations that are not in line with current practice, including regulations on tie seat belts for all seat belt safety. So this is the regulation of progress that needs to be approved so that the traffic police are not struggling to punish.

At the same time, MSc Tran Thi Le Thu (University of Ho Chi Minh City Economics) said that the manufacturer, when getting seat belts in the site of the people behind the driver, had tried to ensure the security of & # The residents were deliberately not. on the car when circulating. In countries where all passengers are required to wear seat belts, entry to the traffic is mandatory. The fact that the fact that it is involved in traffic, whether it is sitting in the front seat or the back seat, when the car happens in conflict, will be affected. Even people in the back seat are affected more because the people who are sitting from their front can take the lead and see the situation of the collisions.

Dr Cao Vu Minh (University of Ho Chi Minh Law University lecturer) said: "The 2008 Law on Traffic Prevention needs to be amended immediately and decree issued to apply the law uniformly and completely". Dr. Minh that the Law on amending and adding to the 2008 Law on Traffic Prevention could clearly state: "Cars with seat belts, the people sitting in cars in these positions must wear seat belts when the car is running. " . There is so much punishment for not wearing a seatbelt (in a situation where a seat belt) is to be equipped when the vehicle is running to become legal.