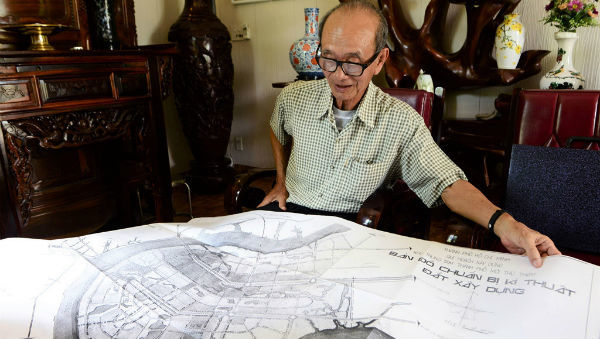 The Ho Chi Minh City People's Committee is working with the City Standing Committee through the period of issues related to the Government Inspectorate's conclusion on the new Thu Thiem urban area.

"The work session had to aim to implement the scheme to implement Notice No. 1483 of the Government Inspectorate on the Thu Thiem New Urban Area, but it did not come to any review" – Vo Viet Thanh, former President of the People's Committee City of HCM.

According to the Government's Inspectorate's announcement on 4 September, HCM City, the Ministry of Construction and the Government Office made many mistakes in the Thu Thiem planning process, breaking the First Minister's plan to approve. free control, land use.

From this fan, the benefits of some households living in the affected area, who are seriously complaining, are not definitely resolved.

It is alleged that the Ho Chi Minh City People's Committee has adjusted the area and boundaries have not been authorized (less than 23.3 hectares of land have been transferred to the previous five ventures but still present and present to the First Minister for approval of the 1 / 5,000 plan), in particular the 4.3 hectare increase in Quarter 1, Binh Ward, Class 2 in accordance with the Planning approved by the First Minister; The location, the approved planning limits, are not uniform in terms of names compared to the map and field.

Secondly, the City People Committee decided to recover land for the area of ​​4.3 hectares in Quarter 1, Binh Ward is not legal enough to implement some projects in the new Thu Thiem urban area. It is in line with the main plan approved by the First Minister.

Third, there are around 160 hectares of resettlement, the City People's Committee breaches provisions of law in planning, land approval and land restoration within 160 ha of a 5 ward resettlement area as the First Minister approved.

In particular, the city has approved the scheme, approved a temporary land allocation, restoration and allocation policy for 51 projects with a total area of ​​144.6 hectares to invest in housing, office, entertainment area, Public buildings award … after the First Minister approves the planning of the resettlement area.

The Ho Chi Minh City People's Committee has apologized to the people, especially the households in the 4.3 ha area outside of the KP1 planning boundary, Binh Ward, Class 2.

The HCM City Chief Architect is said to approve the scheme contrary to the authority, but confirmed that the Chairman had authorized the city.

In terms of land claims in the Thu Thiem New Urban Area, the First Minister emphasized, to look directly at the truth.