Black credit interest rate of 200% per year is surrounded, “students have choked” 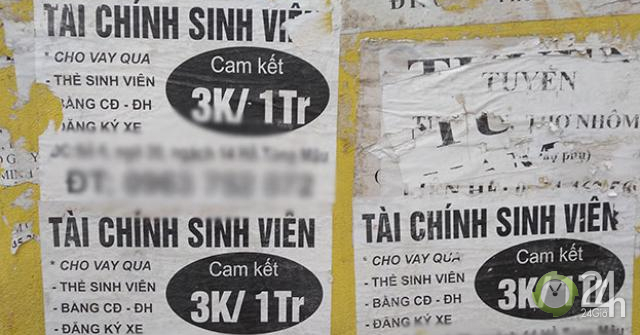 Due to lack of money, where to manage it, many people go to financial support companies to get cash quickly and do not need many complex procedures. This is why many people, especially students with a black credit track, have interest rates of up to 200% per year.

NVS (University Student and Geology) requires a tuition fee for the last year, having been borrowed from all over, it was not found by S.'s financial support company, where S. was funded by a financial company. offers a range of options to view the appropriate loan package. “They say there are two main types of loan, one is that they borrow 10 million to get 8 million to pay within 60 days, or to borrow daily, interest is calculated on 1 million / 5,000 dong, borrow 10 million like 1, 5 million VND ”. The treatment is quick, simple, leaving your ID card, vehicle registration and a home registration book can be borrowed. Afterwards, S. chose to borrow daily, make a 1 month loan appointment, but came to the appointment but did not raise enough money, S. continued to receive frightening messages from the company which was tasty & Before. "My mood is always anxious, unsure when people send text messages threatening every day, my son's interest is my son's interest."

After collecting enough money and main interest after more than 1 month, but when paying S. reluctant when the money is no longer 11.5 million but up to more than 15 million. "The company said because of the fact that the appointment has not paid enough, the interest has doubled to three, so" S. customers cannot save his family to escape a black credit siege.

Not only S., many students are also surrounded by financial support companies, quick procedures and money and money always make many young people “netting” from the black credit system. Accordingly, those looking at financial support companies are "the last step", they need to borrow money but there is no room to look for these companies. However, with many companies promise, interest rates are low, 5%, 10%, but not high, but in fact this number can be up to several hundred a year.

When we asked for interest rates and payment schemes, this person said, borrowing lots of money with low interest rates, borrowing slightly higher, interest is calculated daily, paying 10 times / time, the headmaster is collected at the end of the month. to a flat pair.

Interest rate calculations range from 180% – 200%. In expressing a questioning attitude, in a website that advertises much lower and mental interest rates in calculating this high, this person said: "A fee of such kind is not high, there is even more where I still do prestigious business, I pay hundreds of thousands of VND every week. ”When we offered to lower the interest rate, he immediately expressed his attitude and hung it straight away.

With quick, simple loan procedures, “high profits” “steal” debtors, the type of online borrowing thrives, including black credit. Many lenders run online but without registration and no one is in control, just need ID cards, home registration books can borrow hundreds of millions of doses.

According to Dr. Nguyen Tri Hieu, a financial and banking expert, suggested a legal framework to manage this type of loan. Under SBV regulations, only banks or financial companies with the agency's permission are allowed to raise money from those who have money and loans to those in charge. need. But companies that are peer lending so far have not been licensed by the SBV but they still operate as a financial institution. That is, they also stimulate capital and lend as banks.

This not only cuts the Law on Credit Institutions but also creates great risks to borrowers and lenders.