Suteeb celebrates the creation of the Self-Administered Health Fund 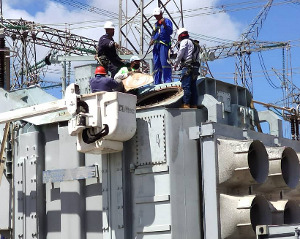 They noted that they also started with the remodeling of Corpoelec dining rooms.

The Single Union of Electrical Workers of the province of Bolívar (Suteeb) extended its gratitude to the Minister of Electricity, Néstor Reverol, for considering personnel safety, after activating the Self-administered Health Fund for the Ministry of Electricity (Fasmee).

“It’s important to restore the company, generate electrical energy, as well as restore the human part of the employees so we can raise our morale and morale, through social security,” said Eliomar Gutiérrez, a member of Suteeb’s executive committee.

Who also noted that they saw with “positivity” the creation of a new figure for the national electricity sector, which workers and their families will benefit from, through the resources provided by the Ministry of Electricity.

“We are going to get the safety of our employees for restoring the National Electricity System and also to restore the purchasing power, to equalize and to be able to get help protecting wages and medical care,” he added.

He said the new fund will help reduce costs and “reduce the loss of state resources,” as they will be administered by its own analysts.

“The high sums paid to private clinics (…) will now be saved, and employee resources, conditions and wages will be improved,” he said.

With regard to wages, Gutierrez reported that meetings were being held in Caracas to compensate him and “be able to compete with the economic war.”

Gutiérrez also added that Corpoelec’s dining rooms and facilities are being restored and put into operation.

Similarly, he explained that they started with distributing Clap boxes to all employees in the various provinces.

“In other provinces they have been delivered (…) Here in Bolívar province the boxes are about to arrive,” he said.

He also announced that the necessary purchases were being made to equip workers in uniform.

Make sure the information is immediately on your mobile phone. Join the Prioia Diario group on WhatsApp via the following link: https://chat.whatsapp.com/LlK92aGSFbs3mDyJPMybud