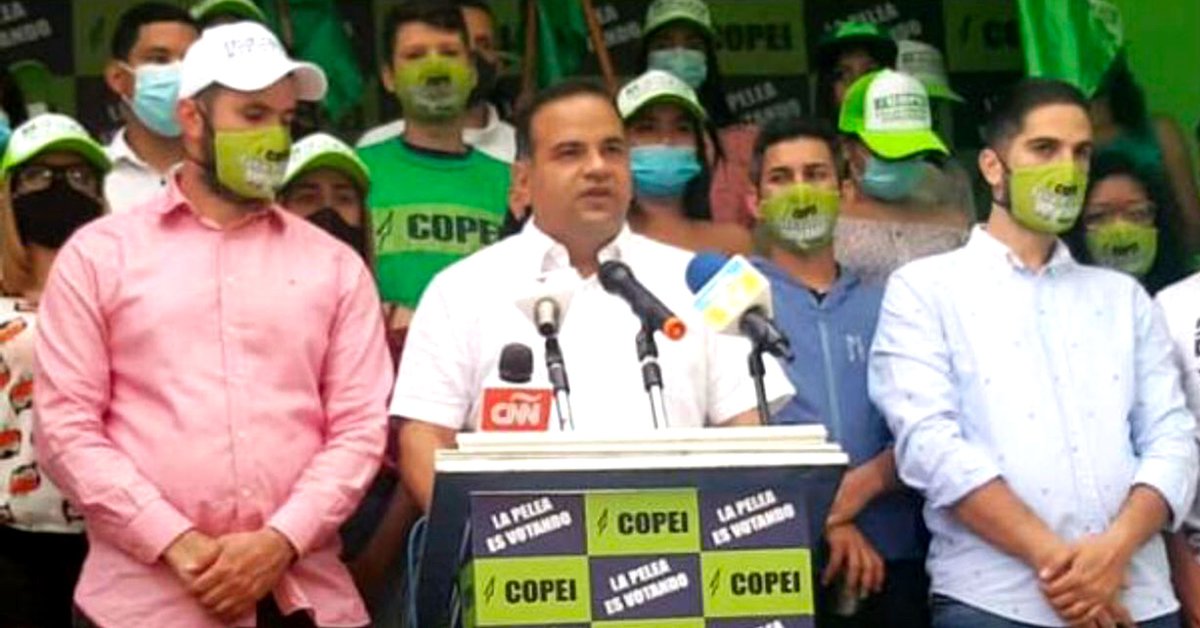 “We didn’t cover that press conference. They mocked our logo. It’s unfortunate that they have to resort to such resources, “wrote Osmary Hernandez, a CNN correspondent in Venezuela. His complaint revealed that Allies of the Maduro regime had forged the presence of the prestigious international chain to give their event a perceived seriousness and credibility.

The image shows Félix Freites, the candidate for circuit 2 of Miranda de Copei, a traditional Venezuelan opposition whose regime intervened months ago, displaced its militants and transferred its allies.

NTN24 reporter Luis Gonzálo Pérez also reported on the scandal: “The bogus opposition that will take part tomorrow # 6D reaches the lowest point of falsifying the identity of international media such as CNN to appear coverage. Mr “candidate” Félix Freites of “Copei” is not a COPEI, what he did is very serious “.

“Attempts to appear normal in the campaign go as far as forging the identities of the international channels to make them believe they are handling the actions. Here the candidate Felix Freites de Copei ”denied, also Eugenio Martínez, coordinator of Efecto Cocuyo’s Fact Check.

The decision to fake the presence of the C signal.NN even more impressive if one considers Maduro himself, since 2017, ordered his removal from the air left accused her of making “war propaganda” against him.

Desperate Chavismo officials and their allies – like Freites – are looking for a way to legalize the legislative elections that Maduro called for Sunday December 6. Without support inside and outside Venezuela, the dictatorship is resorting to all kinds of moves to convince Venezuelans to participate and thereby legitimize elections without any form of democratic guarantee.

In addition to Copei, the Maduro-controlled Supreme Court of Justice intervened the directives of the major political parties: Democratic Action (HR); First Justice (PJ); Popular Will (VP); Red flag; Positive Citizen Action (Accept); Sub-unit; Country Engagement (Compare), Patria Para Todos (PPT); People’s Electoral Movement (MEP); Tupamaro and the Communist Party (PCV), Chavismo’s last four historical allies, but this time they decided to break with Maduro, which shows that the regime is not only attacking the opposition but also dissenting from its ranks himself.

The Chavista court gave regime associates the legal power to nominate candidates for those parties. So tomorrow the votes of those “opposition” will only be with Chavista candidates disguised as opponents.

But in addition to the party hijacking, Chavismo disqualified top opposition political leaders such as Juan Guaidó, Henrique Capriles Radonski, Leopoldo López or Julio Borges. “At the moment, no candidate in the electoral farce is really an opponent. They are all well-known Chavistas or part of Chavismo but they sell themselves as opponents ”, they deny the real opposition to the dictatorship.

And if turned to lies like positioning a fake microphone from the CNN it is not sufficient, the system has already implemented other strategies. As in Venezuela, voting is voluntary, and given that polls estimate that 80% of Venezuelans will not participate because it is a flawed process, Chavismo launched cruel threats against the population to force them to go to the polls: This week, a second Chavismo, Diosdado Cabello, threatened to say “whoever doesn’t vote, doesn’t eat”, in a country with 10 million people in food insecurity and the system controls food distribution in it.

Maduro has also announced that the military and extinction groups, like the FAES, will be seeking citizens at home to take them to vote, with the excuse of “guaranteeing biosecurity measures.”

Guaidó and Maduro await a gesture from Joe Biden