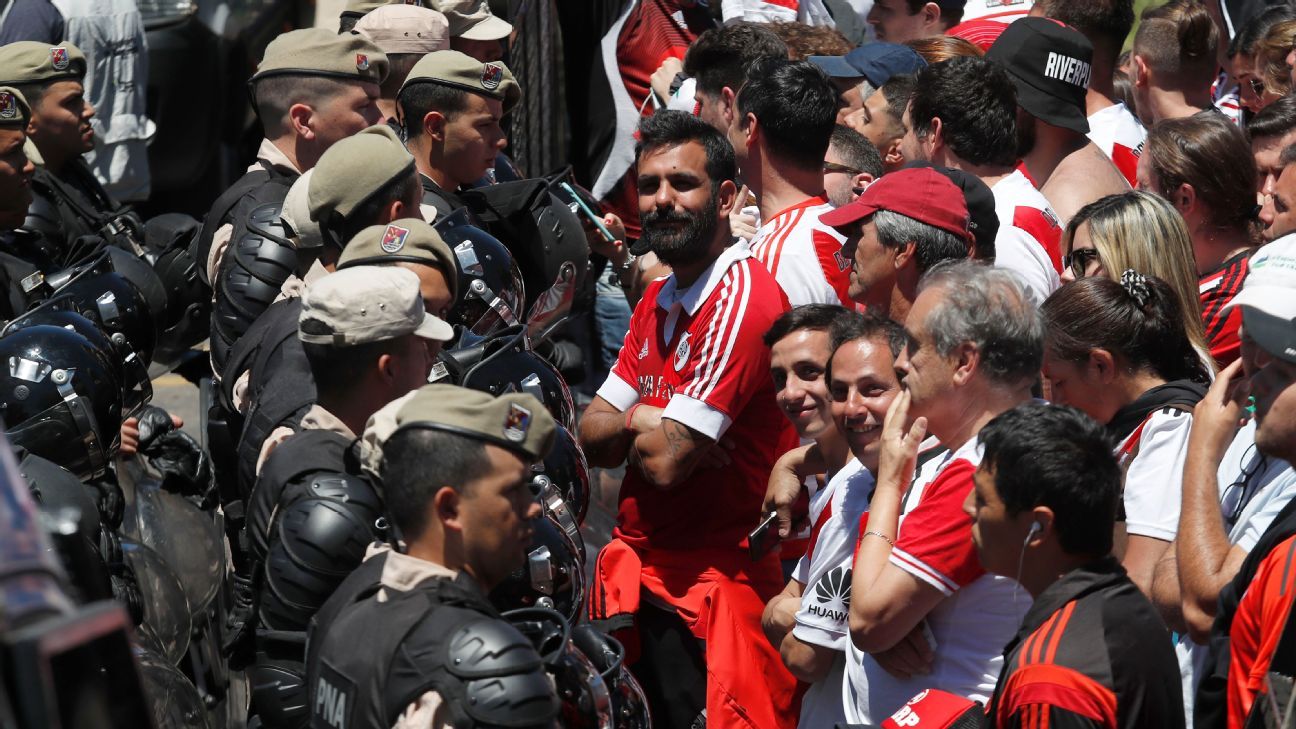 The second part of the Libertadores Copa final between Boca Juniors and River Plate will be played in a neutral stadium outside Argentina on either Dec. 8 or 9, CONMEBOL executives said on Tuesday.

The finalist between the archives of Buenos Aires, originally scheduled to be hosted at the last Saturday Stadium, was postponed after the supporters of the Afon attacked the Boca bus before the game.

It was reorganized to start for a Sunday but it has been deferred again. The first leg was 2-2.

The letter issued by CONMEBOL read: "Regarding the violent incidents that took place in Buenos Aires on November 24, 2018, which was at risk of the security of the players, officers and supporters, including crimes that the Argentine authorities are still investigating, It is clear that the final will not be played in that country …

"In order to ensure that the Libertadores Copa (sporting tournament) has been completed, CONMEBOL has decided: a: That the 2018 Libertadores Copa return legs will be held either on 8th or 9th December in location and time to & # 39 ; w defined by the CONMEBOL administration (subject to the judgment of the disciplinary tribunal) b: CONMEBOL will include all travel costs for up to 40 people per delegation c: CONMEBOL will co-ordinate security with & # 39; the relevant authorities. "

"We're working with the logistics to see how the operation might be," he told the ABC Cardinal AM730 radio on Tuesday.

CONMEBOL Disciplinary case opened earlier on Tuesday against the Afon Plate fans who attacked the Boca Juniors bus. The confederation said the Afon had 24 hours to present their protection at its headquarters in Luque, Paraguay.

Initial decision to postpone the game on Saturday after the first violence has resulted in more trouble inside and outside the stadium, with local media reporting that at least 30 people have & I was arrested.

Supporters away have been banned from football matches in Argentina since 2013 due to regular violence.

Mouth filed a formal petition to CONMEBOL, asking for the River to be punished for a bus attack near the Numentous Monumental Stadium, where many players, including Boca captain, Pablo Perez and Gonzalo Lamardo field referee, were hurt and taken to nearby hospitals.

In their bid, Boca said an article in the regulations that could lead to the award of the Copa Libertadores title without the second leg being played, something that the leadership of the River considered "correct and common disgrace".

President FIFA, Gianni Infantino, who was in Buenos Aires during the weekend to watch the expected game, said he was supporting the CONMEBOL decision to defer the game and La Nacion newspaper: "I'm proud of Saturday events. There should be no place for violence in football. The safety and well-being of players, viewers and officers should always be a top priority."

The first leg between the 2-2 sides was finished in La Bombonera on November 11, with the game playing a day later than the timetable due to heavy rain in Buenos Aires.

Boca believes the River Plate should be disqualified and Boca should have the title. They threaten to go to the Arbitration Court for Sport (CAS) if the CONMEBOL disciplinary committee regulates otherwise.

Boca's president, Daniel Angelici, said after the meeting: "We will not accept playing until the tribunal gives his ruling, with arguments, as we believe Boca is on the right. If we do not agree ( with that determination), then appeal to the appeal court. We will go as far as we can within the administration of CONMEBOL and if we have to go to the CAS (Arbitration Court for Sport) we do. "