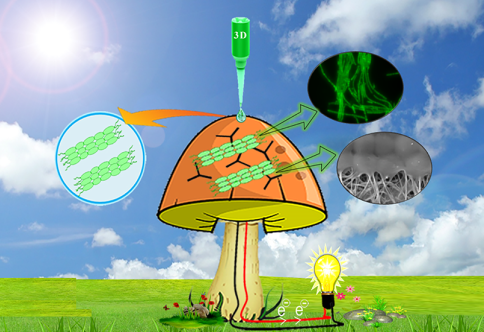 Scientists at the Institute of Technology of Stevens, New Jersey, 3D print what they call "bionic mushrooms" that can generate electricity.

Having disclosed in a study published in Nano letters magazine, the team has shown how the different abilities of biological species can be combined for innovative applications.

Sudeep Joshi, co-author of the paper and Post-Doctoral Fellow at Stevens, said: "We showed for the first time that a hybrid system can incorporate artificial co-operation, or engineering symbiosis, between two different microbiological countries."

Cyanobacteria is one of the largest bacteria in the world. These micro-organisms generate energy through photosynthesis, and the ability to find a scientist can pass on to other biological species in the plant kingdom.

Previous studies carried out on the survival of cyanobacteria on artificial surfaces have shown poor results. Therefore, for this study, researchers chose to use white button mushrooms as a substrate.

Although the mushroom does not have the capacity of photosynthesis, its structure can maintain cyanobacterial colonies within its cap, or "pileus." As Manu Mannoor, co-author of the paper, and Assistant Professor of Mechanical Engineering at Stevens said, "By integrating cyanobacteria that can produce electricity, with existing nanoscale materials that we can collect current, we were able to access better to the unique properties of both, add, and create a new functional bionic system. "

The incks used to make this mushroom photosynthesis are made respectively of graphene nanoribbons (GNRs) and cyanobacterial cells. Both ink were printed on the 3D mushroom pile using F5200N.1 Compact Gantry Benchtop Robot, by Fisnar, a Wisconsin based manufacturer of liquid distribution technologies.

In the first phase, the GNR electrode network was printed 3D in a Fibonacci sequence on the mushroom umbrella. Secondly, on top of the electrode pattern, cyanobaterial cells were printed 3D in a spiral pattern.

The exposure of mushroom to light activates the choreographic photosynthesis. The GNR electrode network printed under the cyanobacteria collects electricity produced by the cyanobacterial cells and produces photocurrent.

As stated in the paper's conclusion, "The 3D bionic mushroom architecture currently developed is a glass and green source of photographic bio-product with a higher function of nutrition and cyanobacteria producing energy, "

"We also believe that techniques developed in the current research can also be extended to print other bacterial colonies with smart hydrogel materials for promoting bionic integration studies."

The article discussed in this article is titled, Bacterial Nanobionics through 3D Print. He was published in the Nano Letters magazine, and co-written by Sudeep Joshi, Ellexis Cook, and Manu S. Mannoor.