Start the work of the BP Commission on the Gandzyuk case: first results 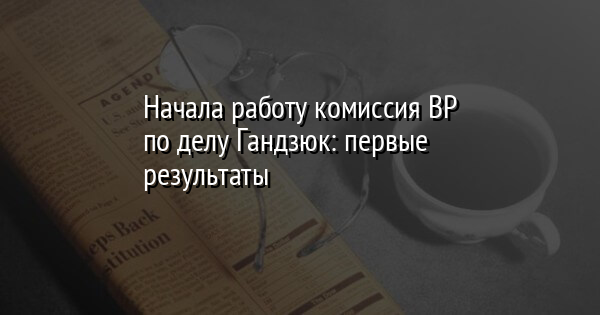 Today, November 8, the Interim Commission of Inquiry began on the murder of Ekaterina Gandzyuk and other campaigners of his work.

As well as the deputies, representatives of the public organization and Catherine's friends attended the constituent assembly.

Members of the investigative commission are 18 deputies. The non-fiscal deputy, Borislav Bereza, was chairman, and Elena Sotnik of the Samopomich party came to become secretary.

At the first meeting of the Interim Audit Commission, they discussed which city the first major meeting should take place.

Many deputies believe it should be held in Kherson, where the disaster occurred to Katerina Gandzyuk.

There are also a lot of people who are offering Odessa too, as there is also a series of attacks on operators.

Members of the Commission have long argued about the number of cases that the investigating commission must take under its wing to investigate the attacks to be of quality.

The next meeting of the commission will take place on Thursday, November 15, at 10:00.

"I am very disappointed that the Interim Research Commission to investigate activists' attacks was created only after Catherine's death. We insist that Anton Gerashchenko should not be a member of. commissioned, it has repeatedly introduced false information on this case, "said Marina Khromykh, the love of Catherine Gandzyuk.

The deputies noted that Gerashchenko was almost impossible to exclude, since the commission was elected on a proportional basis and voted for his constitution in the Verkhovna Rada.

The interim inquiry commission should present the results of its activities in February.