"I'll cut you all." At the "Yagodin" check point, where there was a "Euroblers" rally, there was a brawl if 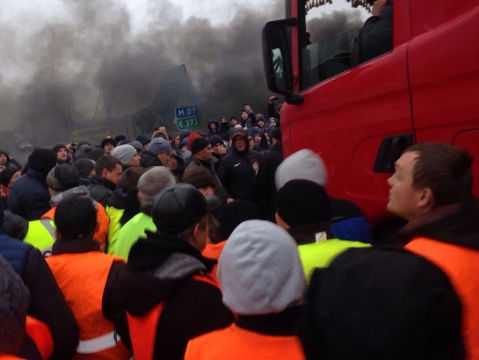 Police police forces attacked the confrontation between the truck driver and car owners with foreign registration only after the protesters started throwing a tire to burn to the car, and began to move on people.

November 26 at the "Yagodin" check point in the Volyn region, there was conflicts between car owners with overseas registration and tractors. This was reported by the local edition "Volin.24".

It is noted that the protesters blocked the road with the requirement to cancel the laws recently adopted on cars on eurocommerce and was passed for 30 minutes on three trucks from Ukraine and Poland.

One of the drivers decided to drive a truck out of time. Because of this, the protesters threw tires into the car, and then a man came out of the car: "I'll cut you all!"

The announcement states that police forces have intervened only when the protesters began to throw tire to the car, and the truck began to move to people. The driver got a truck to break through the barriers and drive through the border, and followed the next five tracks.

The Volyn region police service said law enforcement officers had made information about the events in the "Yagodin" paragraph in the United Kingdom Register of Crime Pre-Trial Investigations, under Part 1 of Art. 279 (block communication communications) and Art. 293 (group contrary to public order) of the Criminal Code of Ukraine.

"Now the situation is stable – the protesters put door trucks, and cars and buses are free in both directions," added the press service.

On November 8, the Rada deputies adopted a general bill on changing excise rates for cars on euro dealers. They will depend on the type of fuel, engine size and age of the car. It is assumed that it will be possible to clear cars used with overseas registration for 90 days from the day the law comes into force, using a coefficient of 0.5, that is, part time.

With another bill, Rada gave responsibility for transferring imports of cars on evronomer, increasing the amount of fines, and prohibiting the use of such cars for commercial purposes as well.

On 20 November, auto Euro Force activists launched a protest campaign, which blocked roads in several regions of Ukraine. They want the age factor to be removed from the excise formula. "Auto Euro Strength" requires the veteran president and the laws. On 21 November, the protest was temporarily stopped.

On November 22, Parliament Speaker Andrei Parubiy signed two pillars and sent to the president for a signature. November 23, President of Ukraine Petro Poroshenko announced their signing.

On November 24, both laws were published in the parliamentary newspaper "The Voice of Ukraine", and on November 25 they came into force.