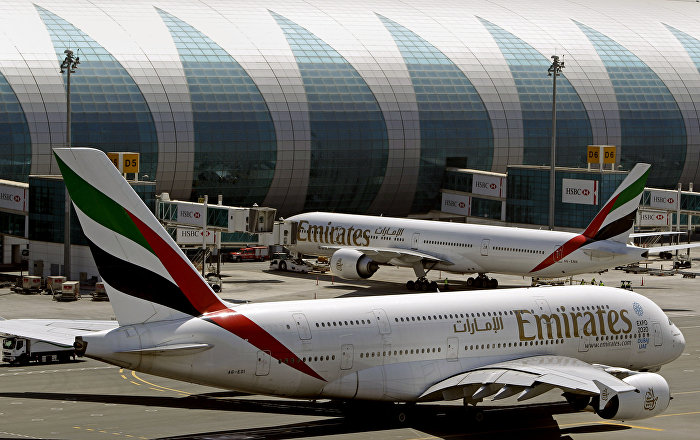 Al-Masirah TV from the Yemeni Ansar group Allah published scenes of one of the most important operations of the air force against what he called "aggressive states".

The scene shows the targeting of facilities at Abu Dhabi airport with the "Samad 3" flock, held last year.

According to the group's "Al-Masirah" channel, a "Samad 3" aircraft carried out several missions on the international airport, without further details.

Local media spokeswoman for "Al-Huthi" (unnamed) quoted "the plane was walking a distance of 1500 kilometers before reaching Abu Dhabi airport."

The spokesman added: "The next step will be the stage of targeting countries' infrastructure of aggression (referring to Saudi Arabia and the Emirates, which are participating in the Arab league in Yemen."

"An incident at the airport was caused by a transport vehicle near the terminal and did not affect operational operations," said Abu Dhabi airport account on his official Twitter page.

Although the group soon announced the success of the attack to destroy the Patriot defense system, in the third attack within 72 hours, the plane was destroyed and did not succeed in the attack on Saudi led military forces to support # 8 the legality in Yemen. , According to the newspaper "Okaz" Saudi Arabia.

He added that the group was trying to target Najran Regional Airport, which is used by thousands of civilians and residents daily without regard to international humanitarian law and its usual rules, which give special protection to civil objects.

"Houthi's terrorist militia, supported by Houthi, deliberately targets civilian and civilian people, as well as civilians and the inhabitants of all nations, without any considerations, which could lead to their lives being compromised," he said.

"In the strongest terms, Al-Houthi terrorist militia have continued to target civilian objects and facilities, as well as civilians," said Colonel al-Maliki, adding that preventing their use of terrorist attack methods will be strong. "

He stressed that the Joint Command would take all preventative measures in line with international humanitarian law and its normal rules.

A military source in the Yemeni air force "Ansar Allah" said that an attack by aircraft "Qasf 2" targeted Najran regional airport in the third attack within 72 hours.

The source told the channel "Al-Masri" of the Houthis that the operation targeted missile missiles "Patriot" of the system at the airport, after careful monitoring of intelligence.

On Wednesday morning, the air force carried out an attack on a plane of the same type, targeting the airports at Najran regional airport, according to "March."

On Tuesday morning, the IAF attacked a similar aircraft, targeting an arms depot at the airport itself, resulting in a fire in the target location.

On March 14, the Saudi Air Force conducted a major military campaign against Saudi's targets, and seven aircraft made attacks on essential installations in Saudi Arabia.

Saudi Arabia has admitted the attack on the two oil pumping stations belonging to Aramco in the province of Dawadmi and in the state of Afif in Riyadh.

It is worth noting that the Saudi authorities have reopened Najran regional airport on the sixth this month, after a four-year closure.

The Saudi-led coalition in Yemen on Tuesday accused Iran's Revolutionary Guardians of supplying Huthis's "Quality Facilitators" in Yemen and would target them inside Saudi Arabia.

"The Huthi militias have had the kind of capabilities that militia in the world cannot have," said the Coalition Party for Supporting Legitimacy in Yemen, Colonel Turki al-Maliki, referring to missiles and ballistic marines .

Researchers monitor a “serious gap” for spying on smartphones

700 people were infected with AIDS in a Pakistani town

Robbery with masks and knives .. to save travel costs