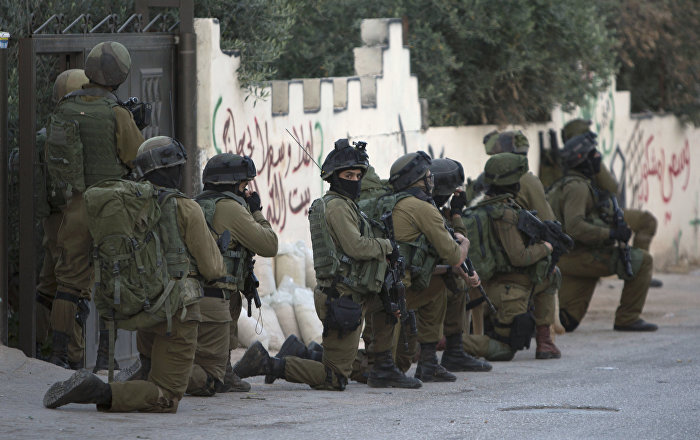 Israeli soldiers arrested a 7-year-old boy after breaking into his school carrying weapons, according to Palestinian media, the child detained was the young man's brother, Omar Abu Laila, who made the assault on 17 March.

A video posted on YouTube showed two Israeli soldiers, who broke into the child's carrying weapon threatening to attend.

The video showed that the Israeli soldier who was holding the child had him out, amidst efforts by those present to stop the arrest.

On his behalf, Palestinian news agency "WAFA" said that the Israeli army had notified Tuesday, the family of Omar Abu Laila, the decision to demolish its house in Zawia town to the west of Salfit.

The authorities gave the Abu Leila family to the end of this month to appeal against the decision to demolish her house.

The agency quoted that the young man's mother said that "a large number of Israeli soldiers had attacked the house at 2:30 am, and that they were shredding pictures of the martyr, and giving them;" r the demolition notice to us, and pull back.

The Israeli soldier killed the young man, after chasing him for about three days, and besieged him in an old house in the town of Abuin to the north of Ramallah, and took his body.

Abu Laila held stabbing and double shooting near the settlement of Ariel in the North West Bank, where he died and killed and fell and wounded three emigrants, including a rabbi who was later declared ill. The bomber also opened on an Israeli vehicle and fled from the scene.