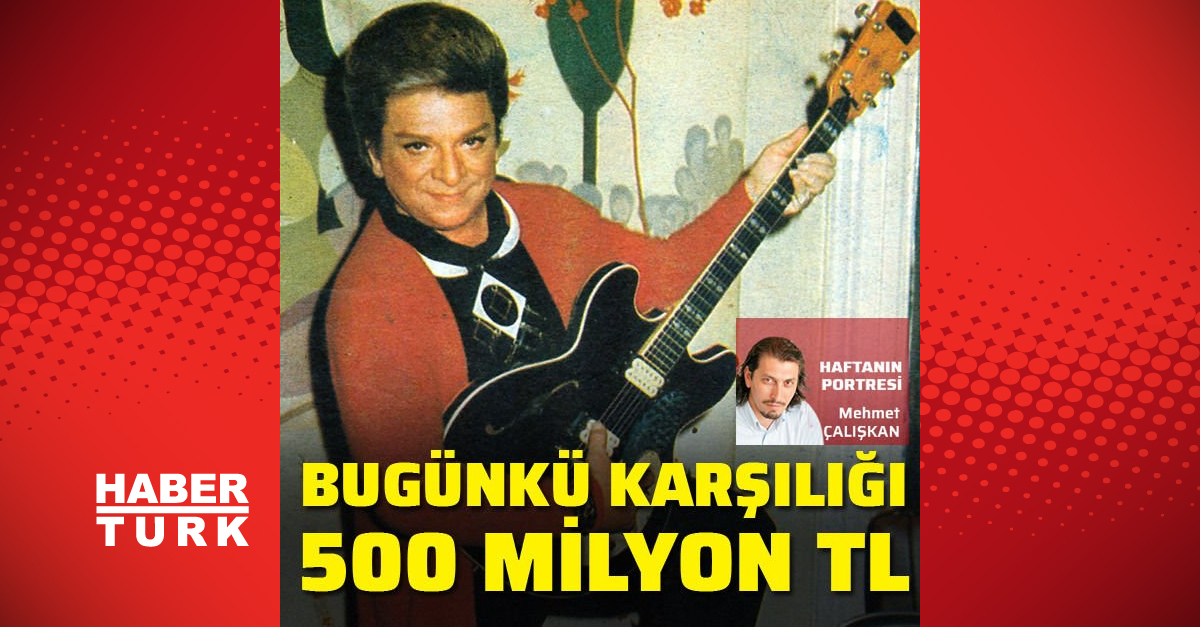 My dad, always Zeki Müren I was familiar with his songs in my childhood because he was listening;
‘What Wind Threw You’, ‘If You Were A Crown We Would Not Wear’, ‘Fire Ashes’,’ I Didn’t Love You Forget ‘,’ Age Friend ‘,’ Your Eyes Enough ‘,’ Magnolia ‘,’ I Ask for Songs’, ‘Friends I Know’ …

Zeki Müren, who retreated to his home in Modrum because of heart disease and diabetes, did not go out or receive guests to his house.
The news value of his photos was quite high, as they had not been taken for a long time. For this reason, when I was working at Modrum in the summer of 1995, staying on the slope of the electric pole opposite his house in Kumbahçe was mandatory at certain times of the day.
It was worth waiting for hours in the sun for one shot.
Because he was the man who made me love Turkish classical music as well as his photographs of high news value.

One day suddenly appeared at the window.
He waved.
So I responded.
We can’t photograph it while waving hands.
Suddenly it disappeared, as it appeared.
After a while I laughed at myself, ‘If you took your picture instead of waving your hand,’ he reassured me that ‘Big Zeki Müren is waving at me’.

Zeki Müren, who hadn’t met anyone for years, was persuaded to go to Izmir from Bodrum for the TRT program. More precisely, he could not violate TRT’s application, which was at an important point in the beginning of his career.
At the start of the trip, it was clear how tired he was, he was also known to have a heart problem and diabetes. However, the authorities did not for any reason consider suspending or canceling the program. In fact, he was kept alive for a long time, when he was released with no health measures. The donation of his first microphone, which he sang at TRT, made him very excited.
Even though he trembled for a moment, no one was aware of what was happening at that moment. He said he didn’t feel good taking his place after taking the microphone. He died 5 minutes later.
He was buried in Bursa Emir Sultan Cemetery.

That day, as Ajda Pekkan said, a legend disappeared.
That legend was born on December 6, 1931 in Bursa as the only child of Skopje immigrants Kaya Bey and Hayriye Hanım.
Zeki Müren said the following about his birth; “The second snow has already fallen on the skirts of Uludağ. Bursa lives one of his nights below zero. My grandfather Hacı Mehmet Efendi sang the first nursery rhyme to my little ears with his beautiful voice after my belly cut off, ‘Boy, boy, wrap around my neck. My arm is a pillow for you, my hair is a quilt.’ I was born at five o’clock when the morning call to prayer was being reported, he used to go to the Şehadet Mosque every day, recite the part.While he recited the hymn, everyone took to the streets My father, Kaya Müren, was the best dressed man in Bursa. He never took off his suit and tied it until he died in summer or winter. My grandmother never removed her long white dress , her hair was always wearing buns. “

Cats had a special place in Zeki Müren’s love of animals.

With the discovery of his singing talent while still in primary school, he played the major roles in the school’s musical performances. She played a shepherd in the premiere.
He took solfege and procedural lessons from tamburi İzzet Gerçeker to develop his tendency towards music.

Boğaziçi High School … He began education in 1946 by persuading his family by force. There were two reasons why he wanted to study high school in Istanbul. First one; love the sea very much. Latter; lives in Istanbul for the music teachers from whom he wants to take lessons. While taking music lessons from Agopos Efendi and Udi Krikor, he graduated from school first.

‘Don’t Poison Your Life, My Heart Is For Me’ … He made his first composition in 1949. He produced nearly 300 songs during his lifetime.
‘Zeki’ is formed from the initials in the lines of its first composition;
WITHDon’t let me know life, dear
E.My every moment is filled with things
K.Even if it flashes with your money, my dear
İI’m a fan of you again

‘A Budgerigar’ … In 1949, he released his first record from the Şükrü Tunar Company. The song also belongs to Tunar.

TRT Istanbul Radio … In 1950, he won the soloist exam in which 186 people participated.
His first concert was broadcast live on January 1, 1951.
Istanbul Academy of Fine Arts … In 1954, he graduated from the Sabih Gözen Workshop of the Department of High Decoration with first place.

‘Expected Song’ … It is his first motion picture film.
The film, in which Cahide Sonku was a producer and co-directed by Sami Ayanoğlu and Orhon Murat Arıburnu, was released in 1953. Sonku also accompanied Zeki Müren in the lead role.

‘Tea and Sympathy’ … In 1955, he appeared on the theater stage for the first time in the play of the Arena Theater.

‘Magnolia’ … He won his first gold plate in 1955. He also gave his first stage concert in the same year. She wore costumes of her own design in her concerts. He brought innovations to the music industry, such as wearing uniforms from the saz delegation and a T-shaped stage podium.

Ankara Infantry School … After continuing his military service, which began in 1957, at the Istanbul Office of Military Representation, he was discharged in Çankırı.

‘Quail Rain’ … He published his poems in the book in 1965. His poems were also for sale as cassettes of the same name.

Passport … After the Aspendos concert in 1969, the Antalya people, greatly influenced by their voices, greeted them as the ‘Pasha of Sanat’. After that date, everyone was treated as “Pasha” by everyone, as the term is also used by the media.

Reception at Ankara in 1974 in honor of renowned Italian actress Sophia Loren.

Royal Albert Londra Hall … In 1976, he was the first Turkish singer to perform at this venue. Around 6 thousand people watched the concert.

Bodrum Castle … He gave the proceeds of his last concert at the castle in 1984 to spend on its restoration.

National artist … He was awarded this rank in 1991.

Zeki Müren underwent surgery in Paris after his first heart attack in 1980. Müren, in a letter to her mother Hayriye Hanım, made the decision before surgery that all her assets should be spent on treating the poor with the foundation to ‘ w set up in her name.

Turkish Institute of Education and Mehmetçik Institute … Three months before his death, he divided his legacy between two foundations, saying “I will leave what I have gained from my country to my country”. His will was reopened in Judge Bodrum Tereke after his death. The legacy of 5 trillion lira, including cash, bonds and real estate, was split at the same rate between the two foundations. This currency now makes 500 million lira over the dollar rate account.

Shortly before his death, Zeki Müren told one of his assistant Ms Sevgi as follows; “If I were filming a movie today, you know what role I would like to play? I would play the life of a composer who died while the applause was still going on, while the door was filled with fans , while he was getting hundreds of letters a day. “

While scholarships were awarded to students with the Zeki Müren Education Scholarship, Bursa Zeki Müren High School of Fine Arts was built by two institutions in 2002.

Memory of Neşet Ertaş …
In one of his Anatolian missions, Zeki invited Müren Neşet Ertaş to his table.
Neşet Ertas, he rang for hours, he said.
Together ‘Zahidem’i Zeki Müren, with a deep sigh, said, ‘No way, this is it’, and accidentally hit his head against the wall.
While Zeki Müren was taken to hospital, Neşet Ertaş could not get out of shock for long.