We're trying to reverse the time for the cell t 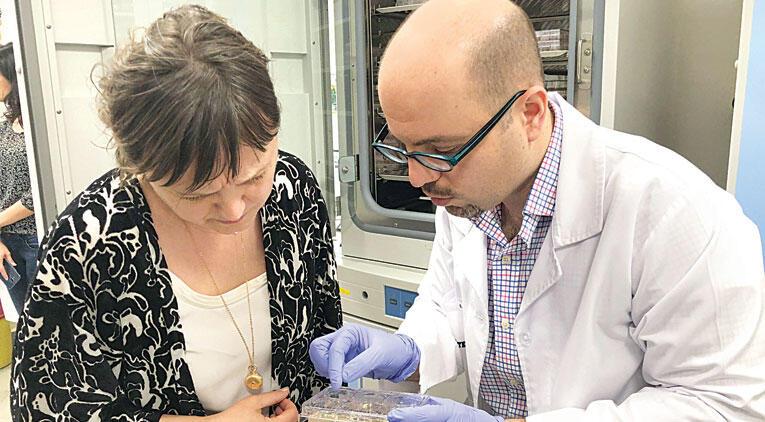 ASSOC. Dr. Tamer Önder, with a team of 10 people in the Center for the Research of Medicine and Temporary Medicine Center of the University of Koç (KUTTAM), is working on UPK (pluripotent stem cell) production technologies individually. Insist that UPK cells can be obtained by genetically reprogramming any cell in the body. Dr. These special cells are very promising in regeneration medicine and transplant treatments because they can renew themselves and turn into any other type of cell. Thanks to this technology, it is possible to produce cells that are compatible with the immune system and can be used in the treatment of any patient. For example, the heart muscle can be made from an UPK cell, as well as pancreatic cells that secrete insulin. Therefore, it is envisaged that UPK cells can be used to treat many diseases such as heart attack and diabetes in the near future.

The colonies of cells that appear in the picture are new UPK cells derived from the skin cell.

RETURN TO THE FACTORY LOCATIONS

MOLECULAR Biology and Assoc genetic specialist. Dr. Tamer Önder (39) was awarded the Sabri nderlker Science Prize for his work on explaining the molecular mechanisms for reliable, fast and efficient production of stem cells that can be used in treatments.

4 GENES IN WALKING WITH THE FERWS

Emphasize that the regeneration of cells can take place through the reintroduction and administration of the cells, Assoc. Dr. Önder continued with his words as:, Because these are human cells, the immune system will not cause any problems. The cells we re-programmed will never return. This work started in Japan and won the Nobel Prize for Yamanaka in 2012. In the laboratory we add 4 gene (O, S, K, M genes) to the skin cell using HIV. These 4 gene are usually very active in embryonic stem cells. When we give it to the skin cell, we can stimulate them. A large number of stem cells are formed 3-4 weeks after transplanting the genes into the skin cell. From these new cells that develop and resemble embryonic stem cells, they are completely compatible with the heart muscle, nerve, liver, and so on. we develop cells. We also carry out screening and testing of chemicals that increase the efficiency and safety of stem cells. We found a chemical (CBP30) which increased the product 10 times. This way, we do not need to export K and M of genes

MODEL DISEASE IN THE LABORATORY

In parallel with these studies, genetic and metabolic diseases of UPK cells obtained through the modeling of these diseases also explained the laboratory environment. Dr. For example, we produce UPK cells of citrullinemia (a metabolic disease associated with the liver that affects the liver) and transform them into liver cells t and three-dimensional cellular structures of the pure organoid name Ön. In these models, we aim to test new treatments and new drugs that are developing. In the future, our aim is to produce UPK cells from individuals with a wider range of genetic or chronic metabolic diseases and to provide faster methods of developing new treatments against such diseases.