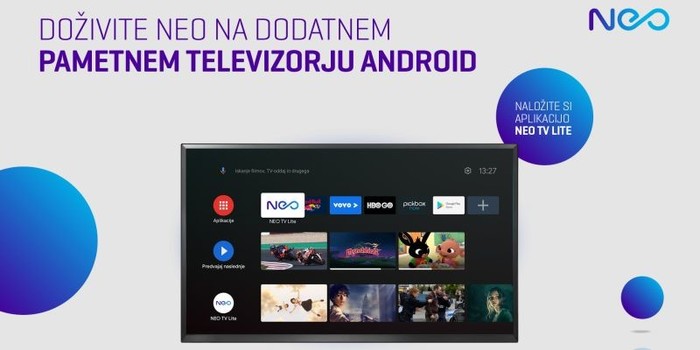 NEO TV Lite allows you to watch TV and radio programs, on demand content, record and watch back up to 7 days on up to five different devices (smart TVs, mobile phones and tablets). The application offers optimum TV programming with adaptive bitstream technology. NEO TV Lite is available to Telekom Slovenije TV subscribers with at least one NEO Smart Box, and NEO TV Lite is enabled for, for example, the second or third household TV device.

The NEO TV Lite application is operated by users with remote TV control, and the same program layout of the Splet NEO program set is available as the user monitors in the mobile application or at www.neo.io. NEO TV Lite does not allow voice control on content and purchases of movies in the video library, so the subscriber buys the movie in the video library through NEO Smartbox and then watches it through NEO TV Lite.

The NEO TV Lite software option is priced at EUR 1.49 including VAT. The order is also possible through My Telekom, NEO Smartbox or during the process of setting up an NEO TV Lite application on a smart TV device. Telekom Slovenije recommends that consumers check whether NEO TV Lite is available in the smart TV applications market before ordering, as some low-cost TV manufacturers may use versions of Android operating system other than Android TV.