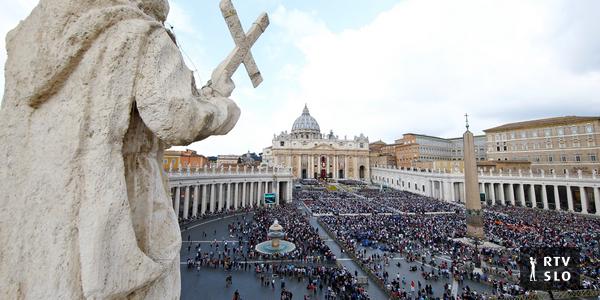 For Radio Ognjišče, Archbishop of Slovenia Stanislav Zore spoke after half the session in the Vatican, which began on Thursday and will take place until Sunday, with around 190 presidents and conferences presidents. "Some concrete steps will need to be done, somehow that will help to overcome such cases and resolve them," He took it.

"This does not mean we have nothing else – we have all that is expected of Westminster, we have guidelines for working to deal with allegations of sexual abuse, but we need to upgrade things Certainly, I believe that this was some definitive guidelines that would enable us to receive and deal with all of these charges more efficiently. " he says.

He said he also met one of the priest's sexual abuse victims during the conference. "It's very important to respect these people deeply, their dependence, privacy," Zore says, emphasizing that his knowledge of the problem is deepening, especially in terms of the extent to which this abuse has deeply embedded. "More childhood than done, it's getting deeper and marking all the life," he says.

"These people certainly ask for compassion, concrete measures for their treatment, restoring, and their families need, too" He took it.

However, he warned that victims of sexual abuse in the Church do not suffer themselves alone. "The underlying victim is definitely abused, who is also suffering most, and the most far-reaching is marked deep in the soul. Then his family , the victim, comes in the whole parish, " said the Archbishop.

"The fall of Pedophilia falls on everyone"

"There is also a great sacrifice in the vast majority of good priests who are responsible and dedicated to their work, but this stain, this fall of pedophilia falls after everything , " It was perfect.
According to his words, many priests are in need because they are considered as possible pedophiles. "These priests need support and encouragement. At the same time, this is also part of the chapter that we all do for the sins of individual members within the Church," says Zore.

At the same time, he also called for believers, "if they notice that sexual abuse they will report", not only to spread rumors with which one "no-one can help anything". "Rumors just break down, harm, throw doubt […] but no-one can do anything. However, if specific names and issues are known, I expect it to be reported, " it was obvious.

"It is also important to look for ways in which this evil has erased from the society as such. It's a very difficult task, maybe even unrealistic, that & # 39; n means we should not go to it, " even the Archbishop called.

Fight sexual abuse in the Church

In the conversation, Zore responded to forming a civil enterprise to tackle sexual abuse in the Church of Slovenia Okay. In this week's initiative, they are committed to fully protecting victims of sexual abuse and call no tolerance to these actions by the Church.

Zore announced cooperation with the enterprise. "At the same time, I hope that this group will have sufficient depth in the legislation in this area, so that they will be able to understand why some allegations are not at all expected of those who are in one way or otherwise, and that they should be treated as complex, of course, in accordance with dog law, including legislation in the company, where these cases are reported to the court, " the Archbishop ended.