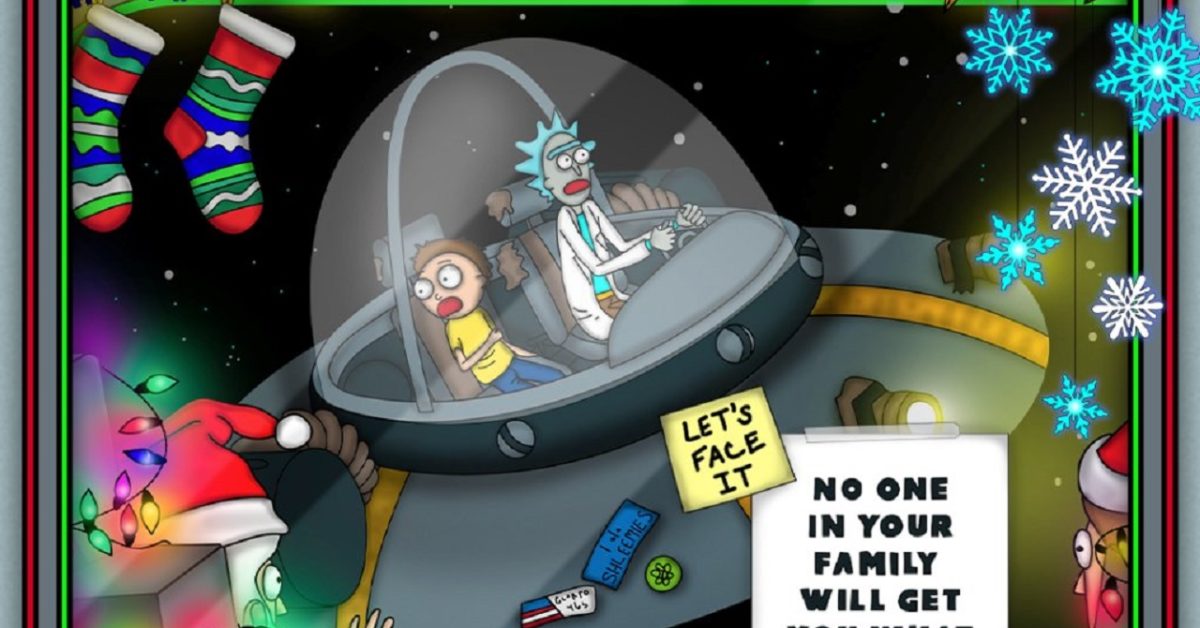 Welcome to the halfway point Rick and Morty and “The 12 Days of Rickmas,” Adult Swim as we open that annoying little cardboard door (why do those things never open properly?) on the sixth day of your virtual advent calendar – without the chocolate goodness but chockful of chances to win some cool and random Rick and Morty swag. With the celebration running through Friday, December 12, fans can head over to the main site (here) every day, plug in some personal information, and then submit for a chance to be one of ten (10) who wins a gift that day “.” So far, we’ve had The Queen’s Gambit love, our boys hitting the open road in style, fashionable protection against the NX-5 Planet Remover, a way to keep track of your existential angst with crappy stickers, a pickle-seltzer infusion we are here just because of the hat bag and tote. So what’s on tap as we reach our sixth day?

How about the pane of our childhood existence, the Rubik’s Cube? Except this time, USAOPOLY has made the experience a little less frustrating with the faces of Rick, Morty, Pickle Rick, Squanchy, Birdperson, and Mr. Meeseeks staring back at us. And there are spiraling benefits of seeing six faces mashed that way – but next time? Let’s throw Mr. Poopy Butthole and Jaguar- or maybe one with the characters from “Total Rickall.” So what are you waiting for? Get your name in the mix with the link above- and for the rules, small print, and other fun stuff that 99.837% of us don’t usually read, go here.

“Rick and Morty”: Here’s What We Know About Seasons 5 and 6

During a panel discussion in July this year, Harmon, Chris Parnell, Sarah Chalke, a Spencer’s Grammar offered fans insights through Twitch into what we can expect from the fifth season- and yes, that included a preview of what’s to come. In the preview, Rick is almost dead so it is up to Morty to save the day- and come back in time for a date with Jessica? Things don’t go quite as planned, as the duo hoping for a dimension face Rick’s previously unknown nemesis … Mr. Nimbus?!?

Still not sure who the real Beth, the What we saw throughout the fourth season or the “Space Beth” return season finale? Don’t feel so bad: even Chalke doesn’t know for sure- and she voices both characters. While still not offering a definitive answer, Harmon offered some background on his purpose for throwing such a personal twist into the mix – and further provoked that viewers might be getting more “Space Beth” in the near future. “You know as much as Rick knows. I don’t want to keep secrets with the audience. What is Schrodinger right now,” Harmon explained. “The fact that she’s a clone or not is really the important thing. The intense revelation about Rick’s commitment to not committing and how aggressive that can be as a parent. That’s the important thing here. We ‘ n add aunties. to the family. We are having fun looking at more options with Beth’s space. “

Harmon was asked what he could offer for the fifth season – and it was definitely good news. After a short pause to consider what he could and could not discuss (we were this closes to get cryptic teasing), Harmon admitted that he confused the 5th and 6th seasons because of how far they are with the two seasons. He revealed that, after the panel, he would review animation for end of season 5 episodes while also in the midst of writing end of season 6 episodes (also joking about how he works with two season finances at the same time).

More specifically, Harmon teased an episode during the fifth season in which Morty enters into a relationship with a female non-Jessica character. Written by Rob Schrab, Harmon says the episode is “a great little story” and even looks forward to next year’s Emmys: “My Emmy is going to that one.” While not joking looking to curse the show’s two-year run at the top of Emmy’s animation mountain, Harmon wanted to clarify that he actually meant his “Emmy heart” (so disregard the stuff that came before it, Emmy voters ).

Mid-November during Global Celebration “Rick and Morty ‘Swim Fest,” Harmon, executive producer Scott Marder, as well as Parnell, Chalke, and Grammer, the session was supposed to focus on the recently wrapped fourth season but also look forward to the future of the series. Harmon stressed again that viewers should expect some “pretty groovy things to come.” But Marder found a way to throw the right amount of gasoline on the fanbase’s demolition guess fires by proving that the fifth season will have an “epic cannon” and that viewers will be “knocked over with the cannon.” As for who they want as guest stars, Ian McKellan a Jeff Goldblum at the top of the list (with Harmon offering an alien with McKellan’s head and Goldblum’s body). In terms of a musical episode, Harmon says it’s “likely to happen at some point” and there have been “conversations” in the past. Oh, and it looks like work on the seventh season is already underway (yes, you read that right).

Serving as TV Editor since 2018, Ray started five years earlier as a contributing writer / photographer before being brought to BC’s core team in 2017.