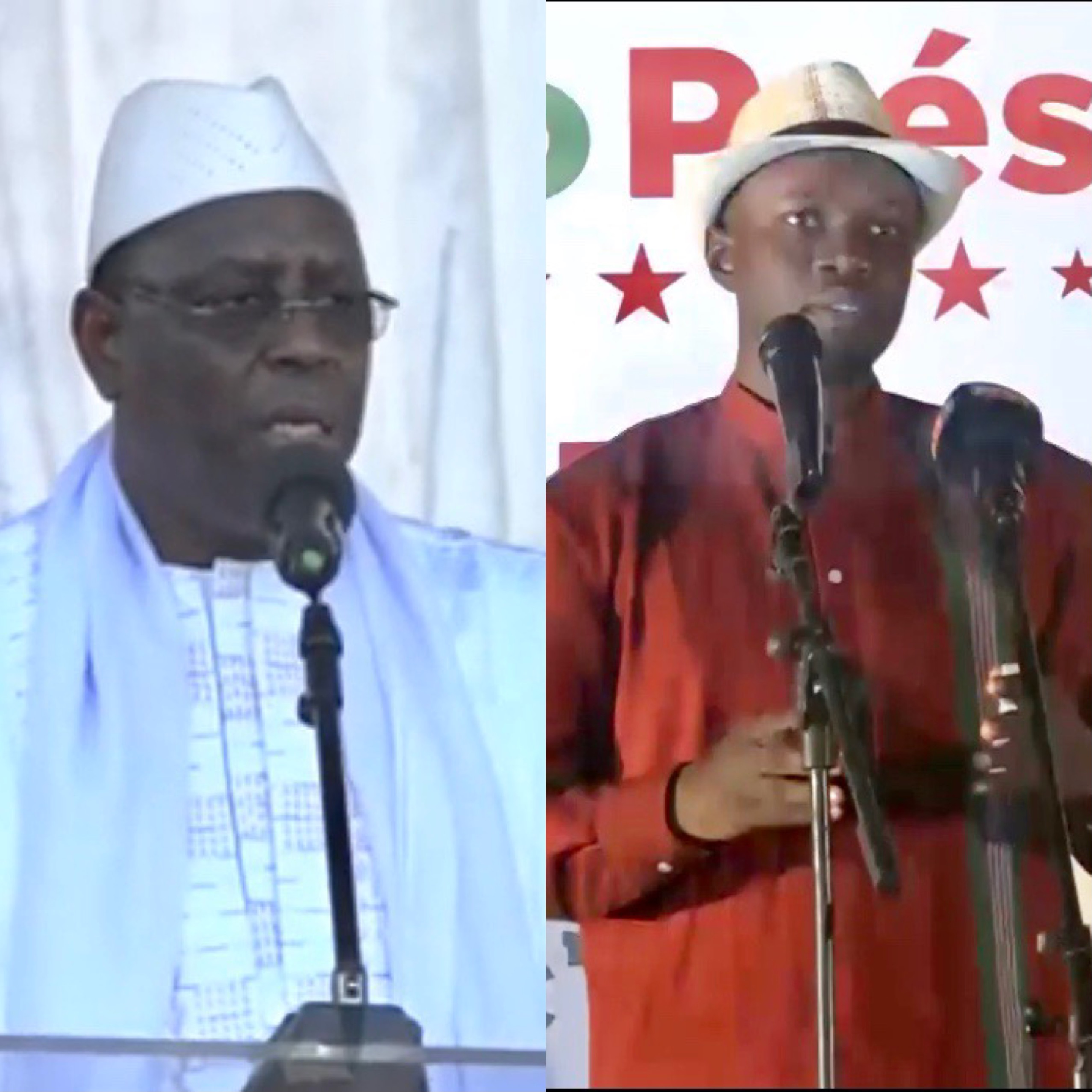 Who says that an election means an election campaign? An election campaign talks about legal money. It is vital that no candidate uses the State approach, and if so he would represent illegal funding. Following the speech of the five candidates, we will make a superficial analysis of their programs. If I do not allow me to do this analysis, because of my experience during the presidential elections led by President Obama to come into force, but also my economic knowledge of how a country should be managed to get rid of poverty. Albert Einstein said: "The theory is when you know everything and nothing works. Exercise is when everything works and nobody knows why. Here we have brought together theory and practice: There's nothing world works … and no-one knows why. "

Madicke Niang, has talked to us about instrumenting justice during the seven years of Sall's president. It is important to note that Madicke Niang is Minister of State, Minister for Justice, Minister of Justice from 2007 to 2009 under President Wade. Wade's President did not have so many deaths and injustice and during tenure. No action has been taken to eliminate the instrumentation of justice. In the opposite, President Wade had to always like it if we wanted to stay in government. We will not be able to judge how he will be able to mediation justice knowing that he was the one who facilitated President Wade. He then talks to us about poor governance. Poor governance has always been present since our independence. If President Diouf told us that what he saw in the administration was surprised, he showed gravity. There was no break under President Wade, to the contrary, it even worsened. The scandal of direct family members was "stealing" a large amount of money without sequencing. This shows us that justice in Senegal is a double standard. Then he talks about the private sector that is on the ground, the 500,000 new poor people under Macky Sall and not paying scholarships that caused a man's death. We must not forget that we can not separate President Wade from the Madicke Niang candidate. Under the Wade system, there was so much confusion as it was under President Sall. The students were on strike on January 31, 2001 for not paying student scholarships and deaths through a live ball. Strong teachers, and police students also want not to pay pay for 11 months. Although financial support was slow, there were budgetary tensions in the state. Madicke Niang is probably Madicke Niang and not Wade's President, but their de-sociology is almost impossible, because his candidacy in my opinion is candidacy of accounting and choice. It was used for a specific purpose other than being a president. Wait and see!

El Hadj Sall, also known as El Hadj Issa Sall, tells us about religious formation. We are not a "religious" country, so we have to make a choice. If we decide to continue with this momentum, we must note that the freedom of religion and the principle of equality play a very important part in a state. He wants to do essential Need and computer science since kindergarten. A very good initiative that we should adopt for a long time to be more open to the world. This initiative will help Senegal attract more foreign companies with a very skilled workforce. He wants a government with 20 ministers, President Sall has announced a government with 25 ministers, there are over 85 ministers. This should be a possibility, however, there is probably a promise that the Senegalians have given the best to believe. He is also talking about financial estates, it is impossible in a poor country, to do so that the citizens achieve this right. We must also be realistic in the programs, as we know that it will take years of sacrifice to reform this country. Real outside!

Idrissa Seck did not agree to talk about "his own mouth", but he preferred to say what he could collect from a long walk that lasted four years. He tells us that the citizens meet all conversations about good governance as a priority. Idrissa Seck was good on his way to become next president of Senegal, but Alas, the place where the Wade President caused his career disturbing him despite the dismissal. In a way, the one who created it killed politically politically. There is a confrontation, because he has a strong coalition of his surroundings, he can really make the surprise during these elections. He is well-known for his pragmatism, emulating English speakers in his way of doing things. Senegal needs this pragmatism to tend to emerge. We have inherited too much the "French" system that is relatively slow. 360-degree!

Ousmane Sonko made his speech in Wolof, the most spoken language in Senegal which is a sign of gentry, someone who believes in his country and the values ​​of his country. It wants to eliminate the informal sector, we will wait to see how it will explain its program to make more statements on this. What has already to be noted is that the disease is only a symptom of the disease, the treatment of this symptom will not improve Senegal's harm. The evil lies in poverty, the unemployment rate and low income. This needs to be improved badly and all symptoms will disappear. It also tells us about the national private sector that is almost incredible, but it also arises from our system's disease. A country with poor base can not afford to build on such a base. It is essential to break the base and to reconstruct or stop up to strengthen the base before the continuous look. When he promises to reduce the corporate tax, I am not sure which constituency he is eager for, but is not good for the economy of Senegal. We need any taxes that we can get, because we are a "financial" country. He takes a division of the constituency in his speech to conquer the hearts of those without a decision. His speech was generally consistent with too much confidence that it must be reduced slightly to conquer the hearts of adults who are uncertain. New blood!

The outgoing president is the president who has been most comfortable in front of the big screen because the national television is a stronghold. He started his speech by talking about religious guides, because he knows that he needs to be re-elected, it is vital that he earns the Diourbel region or at least two sections of this region. Certainly, he had made the mistake of calling the ordinary citizens of marabouts, but it must be accepted that he has removed himself from the way it was handled. He understood that these shortcomings had long been part of the Senegal system before independence. We have stability to God and to religious guidance. I believe that Macky, during his long journey before 2012, saw the endemic poverty that was really in Senegal, but as he was in the presidential palace he had to forget about this poverty because of his to live in luxury. He talks about improving living conditions, injustice and social inequalities. Yes, there have been programs to help the poorest, but we need to look beyond the top of our noses. Getting in debt to help in an emergency is acceptable, but making it a development policy is to prepare for default. We believe that we need help with the poorest, but what is being done to give up these subsidies and make these citizens' citizen development actors? As a good politician, he promised to build a university and airport. I wonder if we are in a Republic or Kingdom. There are decisions that we should not take lightly, because we are a bad country and very debt. Want to invite the electors, yes, but at what price? Social inequalities are still present and will not disappear by 2035, as Senegal has not yet embarked upon a serious and concrete development policy. The perception of instrumentation of justice is truly in Senegal and the president must change this perception. If the population has this perception, it is about offenders that incorporated public money and then went to the presidential camps to avoid a possible prosecution. The president used this tool to welcome everyone who could "feel" in his journey towards a second mandate. The President has now put his word during this campaign not to preside the Magistrates' Council and the Minister of Justice, although he tells us that the President is for symbolic purposes only . As the president does not make any decisions as his Minister of Justice says and there is a perception of instrumentalizing justice, is he no longer chairing? He also talked about the second phase of the PES. I have said that of the foregoing and I will repeat it, the first phase of the PES is incomplete, so how can we start the second stage? Infrastructure is not in place to accommodate the private sector so the PES is still behind 5 years and its date of appearance will be pushed 5 years to bring it to 2040. In short, the PSE is not an economic vision, but a plan that has been put in place to combine political development and politics. Pure politician!

Since independence, Senegal's control system has not changed. Each elected president establishes programs similar to current programs by changing the name and criteria of one or two to take ownership. There are no cyclical policies in place to stimulate the economy. We talk about food self-sufficiency, poverty, unemployment, health, the high cost of living, somehow the human development index. It is time to be serious and develop our nation by diversifying our economy, improving the business climate, and providing ourselves with skilled human resources. We must also develop Senegal in an agreed way by co-ordinating all economic payments and in particular preventing subsidy to public companies in bankruptcy. Before he was sentenced for life, Nelson Mandela said his words: "In my life, I have completely devoted myself to the fight of African people. I fought against white domination and fights against the domination of black. My closest ideal is that a democratic society Free where everyone lives in harmony and with equal opportunity. I hope to live enough to reach. But if necessary, I'm pretty ready to die . "