Director of Ismaili football: Awwad experience in Saudi Arabia is why he has to ban him from the national team t 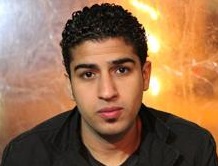 The national team, led by Javier Aguirre, revealed a list of 25 players for the African Nations Cup held in Egypt between June 21 and July 19.

"Awad is a notable goalkeeper and was expected to join the team, but he played for the unity team and the site's instability in the games was a great reason for his ban," Miniaoui said in comments special to Yalla Koura.

Al-Minawi spoke about the choice of Bahir Mohammedi, the team's defender, noting that he was a player in more than one place, and gained the trust of the technical staff and will have an influential role with the team.

Al-Miniawi also expressed his satisfaction with the choice of Ahmed Ali Kamel, the Arab Contractor attacker. "I supervised his training when I was an artistic director of Isma and he's an excellent player who deserves to play as a national team."

Source that speaks about excluding Awad from the team's list: it doesn't have anything to do with what the guard writes t

Omar Jaber to "Yalla Koura": I join the team "I'm happy news that I heard" recently … We want to win the title