Viorel Cataramă announces that he, along with his wife, Adina Alberts, is TESTING the residents of two cities for free, including a county seat – News by sources 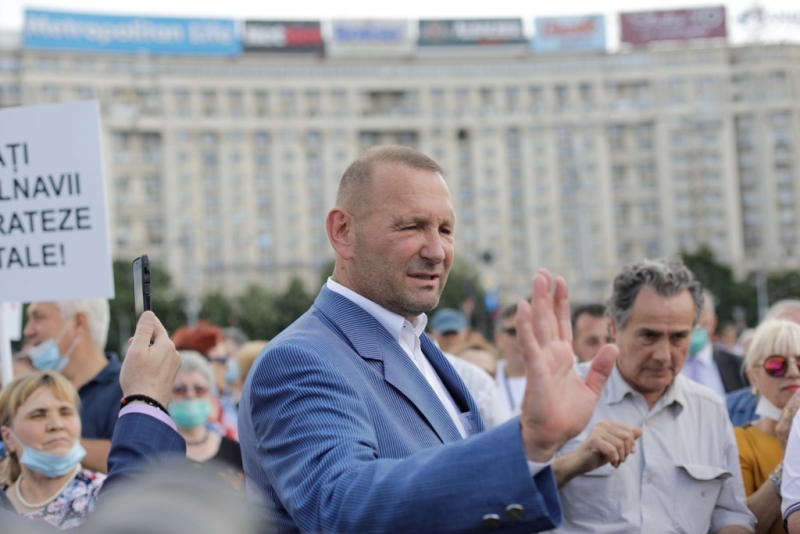 Pro Romania’s candidate for the Senate, in Bihor County, Viorel Cataramă, announced on Monday that he, along with an association of his wife, will organize two free testing sessions for the new coronavirus of the population of Oradea and Beiuş, because ‘ It is normal to take action to let healthy people work.

“It’s an act that has never been done before. Because we promote the idea of ​​mass testing of the population to let healthy people work. We consider it a big mistake for healthy people , to deal with infected people, to be unable to work, for us to enjoy rights and freedoms, just because a government – unconditionally supported here in Bihor by local authorities – is not capable, is not competent to do so , as is the case in other countries. ”declared on Monday, at a press conference, Viorel Cataramă, writing agerpres.ro.

Read also: The government barrier! Violeta Alexandru would have isolated herself with the stamp of the ministry! There are official addresses on desks

The applicant stated that he is involved with the association “Dr. Adina Alberts”, who will organize the tests in cooperation with Viorel Cataramă and with the moral support of Pro Romania. The first test will be held on Wednesday, at 1 pm, in central Oradea, and the second will be scheduled on Thursday, in Beiuş. He stated that Biocredit rapid tests will be used, with an accuracy of over 95%, reported to the Public Health Directorate, in order to comply with all legal provisions.

In his penultimate press conference in this election campaign, Viorel Cataramă mentioned that he had almost from the outset noticed “floating in the air the political table between PSD and PNL, or rather the unconditional surrender of PSD in PNL and Mr Bolojan arms ”.

Read also: News for all Romanian students! When schools might reopen

“I did not think it was so easy for me to find all the parties in Bihor who unconditionally surrendered in the arms of Mr Bolojan and the PNL. All my congratulations to Mr Bolojan! . this performance, in which all parties – except Pro Romania, obviously – became Mr Bolojan’s trusted servants “, he said.

Catarama found this following a complaint made by his opponents to the BEJ, which he described as “cowardly and cowardly” after failing to respond to his request to take part in the debates.

Read Also: Bomb Exposure! The Minister for Dogs is indebted to the bank where he was chief economist! In the middle is a great deal

“When you put the truth before them, many start to cry. And they complained to the County Election Office. Where the evidence was found: although judges and the AEP representative voted to dismiss the complaint, as they were relevant arguments in this regard, the political party representatives voted, which proves to me that there is a gang of people who have personal interests and are not concerned with the interests of the electorate, and who, for various reasons, I may consider but no Unconditionally pass it on to a man with all my admiration for this performance “, says Viorel Cataramă.

On the other hand, he continued that beyond the investments in infrastructure, in the rehabilitation of buildings, which is necessary and to be appreciated, the standard of living, salary in Bihor county is one of the cues of the national rank. Quoting statistics from the National Forecast Commission, Cataramă said that “Bihor is below Vaslui and Vrancea and is fighting for last place with Covasna and Harghita. While Cluj and Timiş are fighting for first place with Bucharest.”

Read also: The government barrier! Violeta Alexandru would have isolated herself with the stamp of the ministry! There are official addresses on desks

“This is a cool, clear statistic, in terms of living standards, wage levels. What I mean is we need to attract investors who can offer high wages,” Catarama said.

In his daily trips to Bihor County, Viorel Cataramă noticed that his slogan “Choosing freedom” has more and more followers, many sufferers bring to his attention various problems that remain to be solved.

Read also: News for all Romanian students! When schools might reopen

“I’m here on the barricades, I’m still fighting, I’ve known the enemy: the brotherhood of the bastards of Bihor, lower political parties, a servant, Mr. Bolojan, who leads with an iron fist, often with very good results. I repeat: there is no county with such a performance, where all political parties, with the exception of Pro Romania, are the servants of another political party or political figure. However, you know that it is sad, and the results of exchange this at a level No one is commenting, everyone is scared, they are receiving messages at reception, because they don’t want to appear with me in case something is happening. jeopardize their work, their business. You are known to pay “The most expensive gigacalorie in the country. What I want to say is that the rebirth of the Pro Romania party here is particularly beneficial from this perspective: that it will work with the local authorities to develop Bihor County and increase the standard of living. “Concluded Viorel Cataramă.

Read Also: Bomb Exposure! The Minister for Dogs is indebted to the bank where he was chief economist! In the middle is a great deal.