Renault's head was extended in Tokyo. What happens with the Dacia owner. Response by the French President 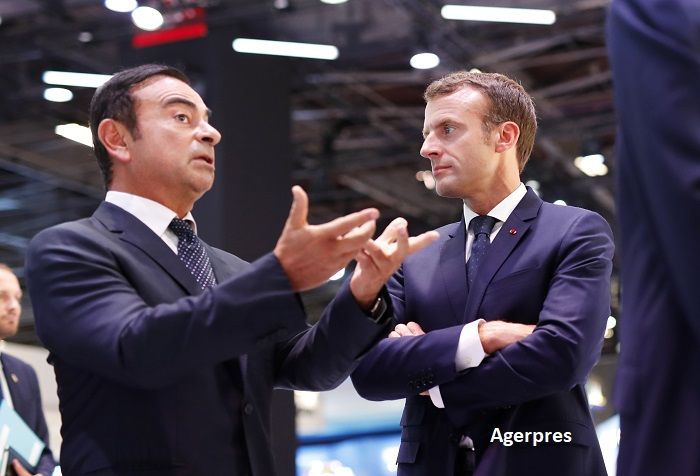 General Manager of Nissan-Mitsubishi Motors, Carlos Ghosn, was arrested on Monday in Tokyo, according to NHK, after accused Pre-Shot of inconsistencies by Japanese manufacturer Nissan Motor Co., informing AFP.

The information was also confirmed by Yomiuri newspaper.

Earlier, Japan's Nissan Motor Carmaker had a press conference at his headquarters in Yokohama, on the outskirts of Tokyo, an occasion to inform President Carlos Ghosn, Chairman of the Board of Directors,for many years ", says tax revenue below the true value.

According to the results of an internal investigation, "other inconsistencies have been discovered, such as the use of assets for the company", said Japanese Automaker, adding that he would propose to dismiss Carlos Ghosn to the Board of Directors "as soon as possible".

Nissan said he provided information to and prosecuted with prosecutors during their investigation.

France will do its best to maintain the stability of Renault and its league with Nissan, President Emmanuel Macron said Monday after Nissan's Nissan auto maker accused Carlos Ghosn of a bad financial legislation.

"Although it's too early to comment on the validity of the allegations, I still do not have much information. However, as a shareholder (Renault), the French Government will remain vigilant for stability the league, the Renault group and its employees, who enjoy the full support of the state ", says Emmanuel Macron at a joint conference in Brussels with the First Minister of Belgium, Charles Michel.

The French state has a 15% interest in Renault, which in turn holds a 43.4% share in Nissan.

In June of this year, Renault's shareholders' Annual General Meeting, which also approved a new four-year mandate for Carlos Ghosn, was 56 per cent in favor of the 7.4 million euros payable last year. ; n added the € 9.2 million that Carlos Ghosn accepted as president of Nissan.

At the age of 64, Carlos Ghosn France-Brazil arrived to Tokyo in the spring of 1999 to compensate for Nissan, who had just made a partnership with Renault, and in April 2017, he became the general manager of the Japanese automaker but he kept the position of chair of the Board of Directors. From this situation, Carlos Ghosn was paid for April 2016-2017 with approximately 1.1 billion yen (8.8 million euros at the time).

Under the leadership of the French Renault group in 2005, Carlos Ghosn has succeeded in gaining shareholder confidence through the results he has won with Renault and with the Japan Nissan partner. "A leader is someone who mainly produces a performance ", says Carlos Ghosn.

The Renault-Nissan Alliance, which was expanded in 2016 by including Mitsubishi, became the world's largest automotive with 10.6 million units last year, more than Volkswagen and Toyota.

Guided by Carlos Ghosn, the Renault-Nissan League was consolidated financially and this is the first group to invest constantly in electric cars, so it's a global leader in the segment This is currently. After the initial Renault-Nissan league has been defaulted for investing in electric cars, a recent competition has started to follow a suit, so the market has risen.

As the CEO of Renault-Nissan-Mitsubishi Motors, as well as the Renault General President and Nissan President and Mitsubishi, Carlos Ghosn is the key vote that balances a wider group. Ghosn has managed to combine a different style of governance that respects cultural differences so that the league can achieve scale savings similar to an integrated society.

However, the operation of this complex ensemble, based on cross-participation, the participation of the majority, collects doubt about its viability beyond the Age of Hope.

He's called a killer cost, "Ghosn has made a reputation for turning bankruptcy companies to very profitable companies. This franco-libiano-brazilian has traveled all over the world since his birth. Its envelope between Brazil, Lebanon, France, the United States and Japan has turned into a multilingual that can move rapidly from one culture to another.

He graduated a polytechnic, this four-father father named in Brazil from the Lebanese family, and Ghosn who started his career in Michelin where he ranges the hierarchical rank to the second site. In 1996, he was recruited to Renault by the general manager, Louis Schweitzer, who appointed him as successor.

Dacia was handed over by Renault in 1999. Re-launched in 2004 with Logan, Dacia has become a famous player in the European car market.