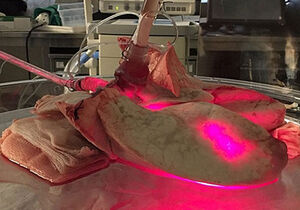 A technique created by Brazilians and Canadians is decontaminating organs for transplants and helps prevent disease transmission to the recipient. The revolutionary biophotics technique, using ultraviolet radiation and red light.

It was developed by researchers from the São Carlos Institute of Physics (IFSC / USP) from the University of São Paulo and the University of Toronto (Canada). The finding was described in an article in the journal Nature Communications. "There have been 10 tests with patients [usando a terapia biofotônica]. In eight cases, the new technique proved that it was able to significantly reduce organ viruses to transplantation.

In another two, the procedure almost eliminated the presence of the virus, "said service coordinator, Marcelo Cypel, Researcher Vanderlei Bagnato, director of IFSC and coordinator of the Center for Optical and Photonic Research (CEPOF) that the laser method can avoid wasting organs.

Scientists have used ultraviolet light and red light to reduce the viral and bacterial load of organs to transplant, preventing diseases such as hepatitis from being transferred to the recipients. According to Bagnato, the technique was initially developed to treat lung, but it is already being adapted for the liver and kidneys.

"This is expected to improve the post-operative conditions of highly transplanted patients and, at the same time, will make it easier to take advantage of organs that are being thrown today, depending on the level of contamination," he said.

The team is now working to implement the decontamination program for the liver and kidneys in Brazil. Two international companies have already shown an interest in studying the possibility of manufacturing and marketing the equipment.

The Bagnato group worked in partnership with researchers at the University of Toronto, home to the world's largest lung transplant program, with 197 surgeries being performed in 2018.

According to the service coordinator, Marcelo Cypel, one of the obstacles to achieving the procedures is the need to disinfect the organs to transplant them, especially when the donor was t carry hepatitis C. virus t

In the case of lung transplantation, the organ transfused with blood has been replaced by a conservation fluid – a procedure called infusion, developed by Canada by Cybel. "The infusion can reduce viral and bacterial load, but not eliminate it. This forced the patient to have antibiotic and antiviral treatment within three months of transplantation," he said.

According to the IFSC teacher Cristina Kurachi, the technique of biophotonic decontamination developed in São Carlos laboratories includes two specific procedures, which occur at the same time. "The role of ultraviolet radiation is to destroy the micro-organisms directly by cutting and cutting the molecules present in bacteria and viruses. So the bacteria are killed, and t The viruses are already inactive, with the red light bath, the operation of disinfection occurs indirectly, through photosensitization, "he explained.

According to Bagnato, improving biopotonic therapy, with the reduction in viral and bacterial load becoming more pronounced, will give a better chance of successful transplantation. In addition to the State Research Support Institute of São Paulo, FAPESP also funded the research by the Canadian Institute of Health Research, the Toronto General Institute and the West Hospital, and the National Council for Scientific and Technological Development (CNPq).