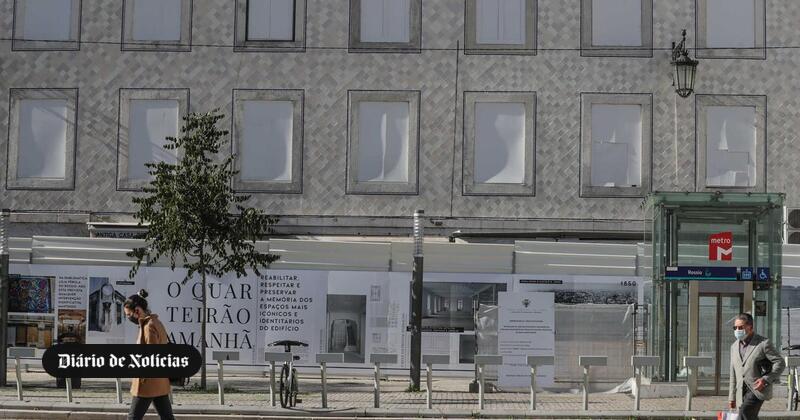 Time expired in Lisbon in the city. The lack of tourists due to the pandemic is painting a void in the heart of Portugal’s capital city, with many shops closed and with traders at the door waiting for the customers they once had.

The streets are packed with people, but few stop in shops and restaurants.

The president of the Baixa Pombalina Dynamics Association explains to the Lusa agency, in the heart of Praça da Figueira, that with the disappearance of tourism there are virtually no customers at the historic center.

Subscribe to newsletters Daily News and receive the information directly.

“Everything was directed so that tourism would be the main buying force in Baixa Pombalina. Restaurants and commerce lived – and not exaggerate – at least 70%, at the expense of tourism,” said Manuel Lopes.

Under a radiant sun in the middle of autumn, the former entrepreneur acknowledges that consumers will take time to regain confidence and purchasing power.

“Tourism has disappeared, customers have disappeared and residents are in short supply. Obviously, with this cohabitation problem, with no confidence in people to move, Baixa is the one most angry with,” he said , noting that there are many deals to close.

Now, he says, it’s more economical for a company to close than be open. In the association’s accounts, about 115 commercial places have already closed.

“There were many people – and it’s not worth ignoring – who started living at the expense of tourism and obviously tourism has left because of these circumstances that we all know. And now to come back and fill our commercial space it will take your time ”, assumes.

In his view, gentrification is not the biggest problem for commerce, but new lease agreements, as entrepreneurs “will not be able to renew their income”.

In front of the D. João I statue is Alfredo Tavares, director general of the My Story Hotels chain, who says he has to close almost all spaces due to lack of tourists.

“We have five hotels in Baixa de Lisboa. We currently have four hotels closed and one open”, sighs the businessman, remembering that, since March, only two more hotels reopened during the summer.

According to the officer, the hotel group suffered many of the restrictions imposed by the new coronavirus.

“We had major cancellations. There is no demand at the moment. I can say that we have received four orders in the last three days,” he said with disappointment, not knowing what the future holds.

Alfredo Tavares reveals that about 25 employees, out of 80, have not seen their contracts renewed, because the group has cut over 90%.

At Rua da Prata, a door opens to the East. The smell of ramen (Japanese pasta soup) triggers the sense of smell and opens up the appetite.

Paula Dias tells Lusa that the Japanese food restaurant Panda Cantina had to adapt to the new reality, stressing that it was never “dependent on tourism”.

According to the space manager, production fell by half. The restaurant is small and, with hygiene and safety measures, it is not possible to have meals for more than 15 people at one time.

In this odyssey through the streets of Lisbon almost lifeless, with closed commercial spaces, immigrant souvenir shops from Asia that are increasingly giving light to the city center.

Among the many dozens of shops with door locks, there is one that appears with a warning on Rua da Madalena: “This establishment will definitely close at the end of December. We sell everything including furniture at discounted prices “.

At the counter is Homero Cardoso, who explains that the pandemic has taken customers to the Portuguese handicraft shop Santos Ofício and that he does not see an easy future for the activity.

“I’m already tired of fighting for a project always with mountains of difficulties. We are, at some point, after the pandemic […], we still thought things could improve a little, but they got worse “, he stresses, referring to the business being” totally dependent on tourism “.

According to the owner, the lack of support closed the 25-year-old.

“[No verão] 200 foreigners came here. Of the 200 foreigners, five probably bought, the other 195 went in as if they were coming to see a museum, enter and leave, and steal some, “he said.

The store has only remained open in recent months because it had hopes that “something could improve”, a wish that never materialized.

Preventative tests like PSA and digital rectal examination can save lives

A pandemic in the Center region? The summit should have already been reached