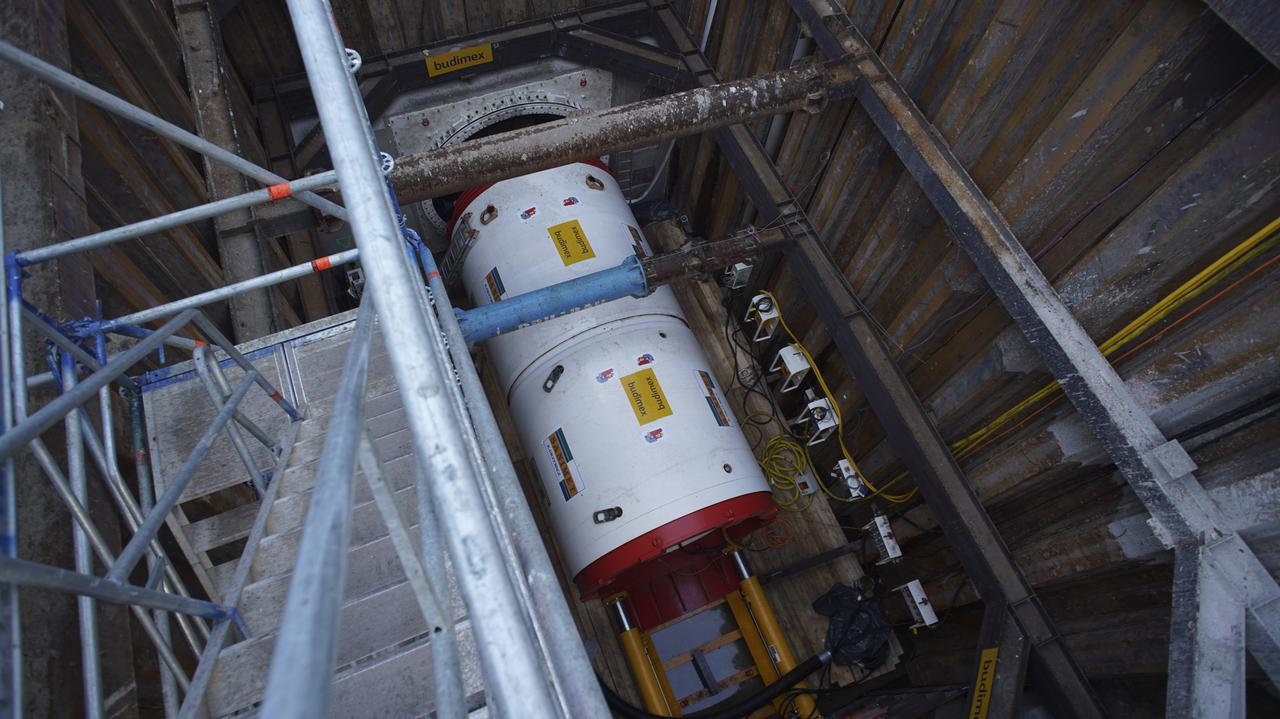 Miejskie Przedsiębiorstwo Wodociągów announced that Kanalizacji had begun construction of a Vistula Collector along the Wisłostrada River. Heavy equipment appeared on the construction site on the Żoliborz part of the street.

The boring machine weighing 145 tonnes was transported on three trucks. The device includes a pen, disk and drive. After connecting the individual elements, it was lowered to a depth of nearly 14 meters into the launch chamber. Before drilling, the machine will undergo some tests.

As stated in the MPWiK press release, the 9.5 km long collector will be made using the microtunneling method. This means that further sections of the pipeline will be pushed underground behind the boring end of the tunnel. – Vistula collector will be the longest microtunnelling in Poland with a diameter greater than three meters – said Marek Smółka, MPWiK press spokesman. – As part of the phase currently implemented by Budimex, a collector over 5.5 km long will be built, and the boring itself should be completed in 2022 – he added.

Fewer leaks to the Vistula

The collector will be located six to 15 meters below the surface along the following streets: Wybrzeże Kościuszkowskie, Wybrzeże Gdańskie and Wybrzeże Gdyńskie. Its basic diameter will be 3.2 meters, and will be able to hold approximately 50,000 cubic meters of rainwater and sewerage. This is to reduce the number of storm overflow discharges that start during heavy rainfall.

We asked an MPWiK spokesperson to narrow the area where sewage and rainwater will go to the new collector. – As for the Warsaw area, these are the areas of Śródmieście, Żoliborz, Bielany, and, through other collectors, the Bemowo, Wola, Ochota, and Mokotów districts. If there is sudden and heavy rainfall in the Ursynów and Wilanów areas – also from these areas, rainwater will enter the Vistula drain. The collector, by preventing the flow of rainwater from Warsaw’s left bank areas, will also relieve the “Czajka” sewage treatment works in this regard, which will be able to receive more of it from the left bank side at that time. Therefore, it can be said that the Wiślany will be a keep collector for the entire catchment area of ​​the “Czajka” sewage treatment works, Smółka explained.

He also noted that the future collector will be included (along with other consignment and transit collectors, such as Lindego Bis and Mokotowski Bis) into the central control system of the combined network. – This system will continuously, based on forecasts, direct wastewater and rainwater to those collectors who currently have the highest free capacity – the MPWiK spokeswoman stressed.

It is to be built within three years

Budimex representatives note that the tunneling, as well as other work related to building the collector, will be done 24 hours a day, seven days a week. They emphasize that microtunneling technology is an environmentally and employee-friendly method, and also reduces communication difficulties. “The installation of the pipeline is remotely controlled, which, while maintaining full precision, allows the number of people in the trench to be reduced. In addition, the time required for its operation is shorter than in the case of work done using traditional methods “- they add.

According to the schedule, the collector should be built within three years. According to MPWiK, construction is being carried out under the EU project “Water supply and wastewater treatment in Warsaw – Phase VI”, which also includes the construction of Linde Bis and Mokotowski Bis collectors and a central control system for the combined sewerage system. Also integral to this project is the reserve fund commissioned this year at the Czajka Plant.

Construction of the Vistula Collector is beginning