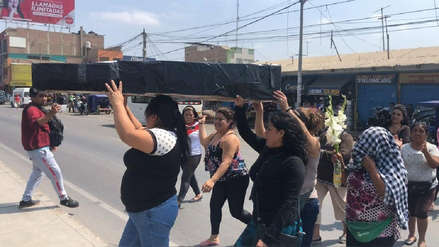 Traders from the city of Lambayeque, they perform simulation "funeral parade" Mayor Ricardo Velezmoro Ruiz, to refuse his claim categorically to carry out remodeling in the Model market of this province.

Soldiers who had been wearing in black, cancers and head shirts were placed on their heads and a bang was loaded on the outskirts of the commercial areas, to refuse the plans of the present mayor.

"We have said that we will protect the market with a series of movements. And so we are doing it. Mr Velezmoro has nothing to do with this work, he will have to see the new mayor already "indicates the traders.

As you remember, the municipal authorities warned the traders that the project would be implemented anyway, despite his constant refusal. Even the Mayor, in media releases, ensured that the work will be done anyway, whatever happens.