National Police César Cervantes: “I rule out any possibility of a police strike” 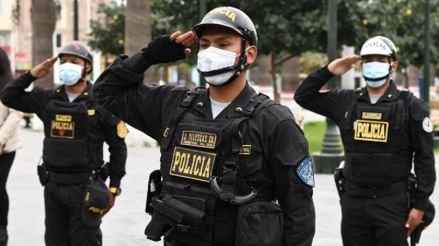 Cesar Cervantes, general manager of the Peruvian National Police (PNP), rule out the possibility of a strike in the organization, as argued by a sector of the local press in recent days.

“I can assure you, in my capacity as director general of our National Police, representing 140,000 police officers, that I rule out all possibilities of what you publish (police strike) ”, he said this morning at La Rotativa del Aire.

The high command noted that he had visited various units of the PNP to “strengthen morale” and “recognize the selfless work” of the agents. “My concern ranges from my third non-commissioned officer to the highest ranks of the organization,” he said.

In this sense, the general stated that he had requested an evaluation of increasing vacancies for NCOs in the ForceAn initiative that, he says, “is on 90% approval.” He also announced that a similar measure is being evaluated for PNP officials.

“I completely disregard that the National Police have any iota or any indication (of going on strike). We have been created to care for our citizens and this is the message. All the steps that will be taken will be reconnecting, regaining confidence, ”he reiterated.

At another time, Cervantes announced that Minister of Labor, Javier Palacios, and Agriculture, Jorge Montenegro, they will travel to Ica today to set up a dialogue board with the workers of the agro-exporters who comply with stop.

With regard to the actions of the Police in this conflict, the general stated that he had given “very detailed” instructions there is no oppression of the demonstrations.

“The presence of the police is to guarantee and maintain internal order. We are very attentive. My routine has been very clear: no social cost during this exercise of this conflict ”, he asserted.

About Inti Sotelo and Bryan Pintado

When asked about the status of the investigation into the death of the young Inti Sotelo and Bryan Pintado during the anti-government demonstrations on November 14, General Cervantes stated that two processes are underway.

“What I want to highlight is that there is a message of transparency, access to information. In this sense, the National Police are awaiting the results and awaiting the individualization. We fully agree to make it an impartial inquiry and await the results“, promotion.

Newsletter About the coronavirus

COVID-19 has alerted everyone. Subscribe to our newsletter All about the coronavirus, where you will find the most relevant daily data in the country and the world on the progress of the virus and the fight against its spread.

– ‘Espacio Vital’: What is pandemic fatigue and how to avoid it? Dr. Reply Elmer Huerta: