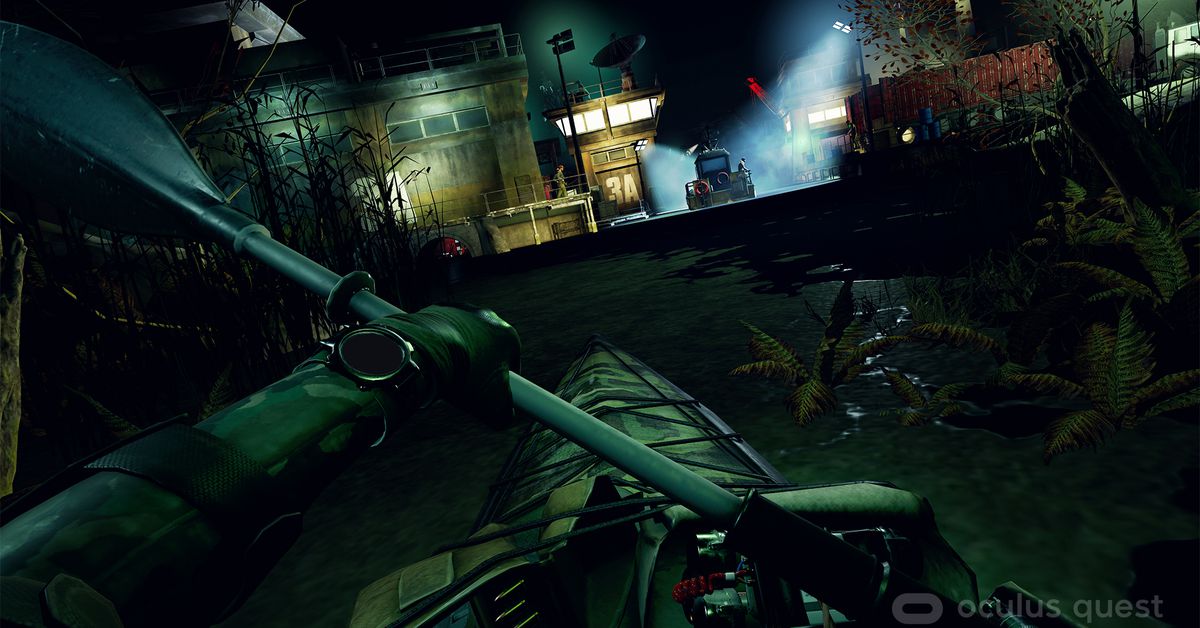 Game Oculus VR Phantom: Covert operations has the most unexpected hidden ingredient in recent memory. Our tactical action game where the player tries to stop the whole war by infiltrating an enemy base. And it's played, as a whole, inside a kayak. A tactical kayak.

Phantom: Covert operations is a union two development projects in Dhreams, the U.K studio behind VR price Shooty Fertility a Bloody zombies. The studio, which has made virtual reality versions of skydiving and hot air balloon, worked separately on a kayaking game and a stealth game. At some point during that development, those two projects were combined with great to form Phantom: Covert operations.

I prefer to play my VR games sitting down, where I can concentrate and avoid the cue that comes from moving around in a virtual reality with full camera control. Phantom: Covert operations keep me sitting as I play – remember: t I'm in a kayak – let me look around in the flooded military center I infiltrated it and allowed me to focus on the game controls. With both hands, I use a virtual pad to navigate and move my tactical kayak with one-to-one movements, paddle forward and back and turn with natural hand offers. Using Oculus Quest's movement controllers, I piloted my kayak for as good as canoeing real life, which is to say… is adequate.

My tactical kayak and I are getting very armed. A quiet pistol has been split on my chest. A rifle has been scoped sitting on my right side. I can put my pad away to pull my pistol quietly and shoot spotlights that could help enemies see me. Or I can shoot a firefighter to cause distraction, or an explosive red barrel to cause destruction and death. I also have explosive charges that I can throw and blow them using a lighter.

But this is a stealth game, and there are many nonlethal options. I can gently navigate my fingers around the spotlights, take a cover in pockets of reed, hide under platforms, and open up uncut paths to avoid enemies.

As in many stealth games, things are getting dangerous quickly if you notice them, and finding a safe hiding place can be difficult. This can be a tactical kayak, but it behaves like watercraft; it won't turn on a dime. I often died when I was paddling indiscriminately into the enemy's sight line, but the checkpoints were fair and frequent.

In a nutshell, this is a stealthy military VR game that works, thanks to our kayaking component (which is really lovely and our friendly compromise). It has a clever design to modify a game genre that already exists to virtual reality, while taking advantage of VR's immersion features, where the fear of getting noticed by enemy soldiers are greatly increased.

Phantom: Covert operations It is expected to launch sometime in 2019 for Oculus Quest and Rift.