Milk price has not changed since 2014

The Morocaid Centrale Danone dairy boycott due to the high price a few months ago has had serious results for the company and the dairy industry. Yet the incentive for the boycott movement was not justified as the price of milk had not increased since 2014. Information that has been confirmed by the HCP only in a note that describes & The main trends that the subsidiary marked during the last 10 years. Consumer prices for milk and dairy products since 2014 appear to have been stable, increasing an average increase of 0.1% and 0.3% respectively.

Stability that has settled after about 4 years of annual increase. Between 2010 and 2014, the milk price index curve (see Figure 1) has increased by 0.9% on average, specifically driven by an increase of 3.8%. % and 2.8%, respectively, from compressed milk prices and infant formula. 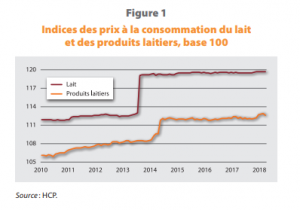 Meanwhile, milk prices saw an average increase of 0.7% driven by the 6.2% increase in wheeled prices and a 3.9% increase in cheese. On the other hand, consumer prices for yoghurt and chrème fraîche remained relatively stable.

However, despite the decline in imports of dairy products except cheese and butter in the years 2015 and 2016 that matched this standardization, the balance of milk trade and milk products was still in deficit. A shortfall standing at almost 640 MDH in 2017.

Morocco has continued to import almost 60% of milk product requirements (infant formula, UHT and milk powder), mainly from the Netherlands (32.1%) and France (27.5%). %).

It is also evident from this note that the Rabat-Salé-Kenitra region is the first dairy zone in the Kingdom, producing 522 million liters of milk. Following the Beni Mellal-Khénifra, Casablanca-Settat and Marrakech-Safi regions, which provide, on their behalf, 47% of national milk production.

In 2017, 2,800 dairy center collection centers produced a total capacity capacity of more than 2.5 million liters of milk per day, having been processed in 122 local industrial units. It should be noted that the dairy sector contributes an average 5% to the volume of agricultural production and accounts for 10.7% of the agri-food industry.

Milk price has not changed since 2014 Last modified: November 11, 2018 no Lamiae Boumehrou