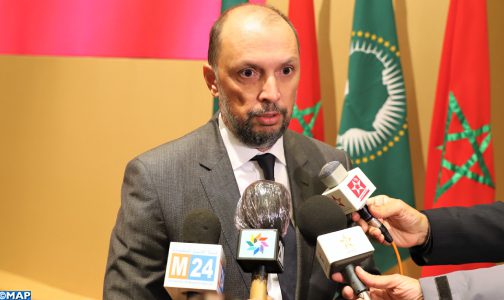 Rabat – The security and stability challenges facing Africa, which manifest themselves in multiplying conflicts and crises, require all synergies of concerted and unified efforts and response, highlighted Sunday in Rabat, the Deputy Minister to the Minister for Foreign Affairs, African Cooperation and Moroccans living abroad, Mohcine Jazouli.

To consolidate and consolidate “the Africa we want”, the continent needs security, stability and peace, said Mr Jazouli, who chaired Morocco’s delegation for the 14th African Union (PA) Extraordinary Summit, hosted by video- conference on the theme: “Silence of the Guns”.

To do this, the minister says three axes are essential: collectively taking the necessary measures to combat terrorism and religious extremism; prevent the illegal circulation of small arms and light weapons; and adopting the Union policy for peace support operations, based on clarity and adherence to the basic principles of Peacekeeping Operations.

In this regard, Mr Jazouli stated that AU’s draft doctrine on Peace Aid Operations should be “inspired by these principles”, assuming that it is necessary to introduce the principle of “subsidiarity” which gives primary responsibility to the UN Security Council United Nations for maintaining international peace and security.

The Delegate Minister underlined, starting from his awareness of the undeniable link between security and development, Morocco, led by HM King Mohammed VI, “works with seriousness and pragmatism to transpose the AU’s decisions”.

Noting that Morocco has always advocated for “multidimensional, integrated and joined-up” approaches, Mr Jazouli recalled the Kingdom’s acceptance of the inter-Libyan dialogue that led to the Skhirat Agreement in December 2015, noting that these efforts had continued in in recent months, holding several rounds of discussions, to promote the dialogue between Libyan parties.

Mr Jazouli also underlined that achieving the objectives of silencing the guns in Africa requires respect, both by the Member States and the Commission, for the decisions taken by the Union.

“Attempting to cut them as in the case of Commissioner Chergui who gave himself the freedom to raise the question of the Moroccan Sahara while the examination of this question is framed by Resolution 693 which preserves this attribution to the Troika, an attempt to entertain our August assembly of its objective to achieve national designs not worthy of a high Commission official bound by the obligation of neutrality ”, hammered the Deputy Minister.

He said that in this context, Morocco supports the adoption of the draft statement and resolution as passed to the Assembly by the Executive Council.

Through the theme of “Silence of guns: creating conditions conducive to Africa’s development”, AU’s Unusual Summit seeks to reflect on how to end armed conflict on the continent.

As well as armed conflict and the threat of terrorism, violent extremism and radicalization, participants at this summit, which will adopt the Johannesburg Declaration, will explore the issue of discrimination exacerbated by the flow of arms and illegal funding, organized crime. and cyber-crime.