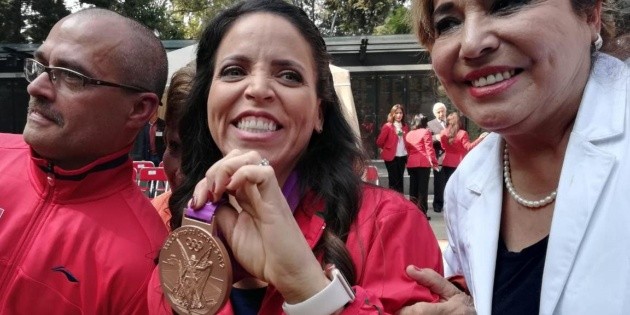 The wait for Luz Mercedes Acosta who, after six years, has received the bronze medal at the Welsh Olympics London 2012 in the weight loss test of the category 63 kilogram, after banning three athletes for climbing.

At an emotional ceremony, held at the Mexican Olympic Committee, Olegario Vázquez Raña, an honorary member of the International Olympic Committee, awarded the third to sonorense. Later, Carlos Padilla, president of COM, presented the pin supporting him as an Olympic medal, as Ana Gabriela Guevara gave him flowers of years.

"After I retired from high performance, with 22 years of career, I felt that I had to do something to the weight I felt empty because we did not achieve the set goals "said Luz Mercedes, who said that with this acknowledged" justice was done ".

"After I retired from high performance, with 22 years of career, I felt that I had to do something to the weight."

Acosta noted that many athletes feel strongly that they have been able to do something more for their proper discipline and that "sometimes third party or external issues".

At the end of the event, his name was unveiled on the JJOO medalist athlete wall.

The medal is No. 69 of a Mexican delegation in the history of the Games and the third one that Mexico rises in weight after the gold of Soraya Jimenez is Sydney 2000 and bronze Damaris Aguirre in Beijing 2008

The international athletes who abolished the medal for a copy and opened the way to Mexico are: the Kazakh Maiya Maneza, the Russian Svetlana Tsarukaeva and the Turkish Sybel Simsek.

The Sonoran completed the 63 kilogram test in the sixth place.