The listener may not like it, but playing contemporary music is important / Article / LSM.lv. 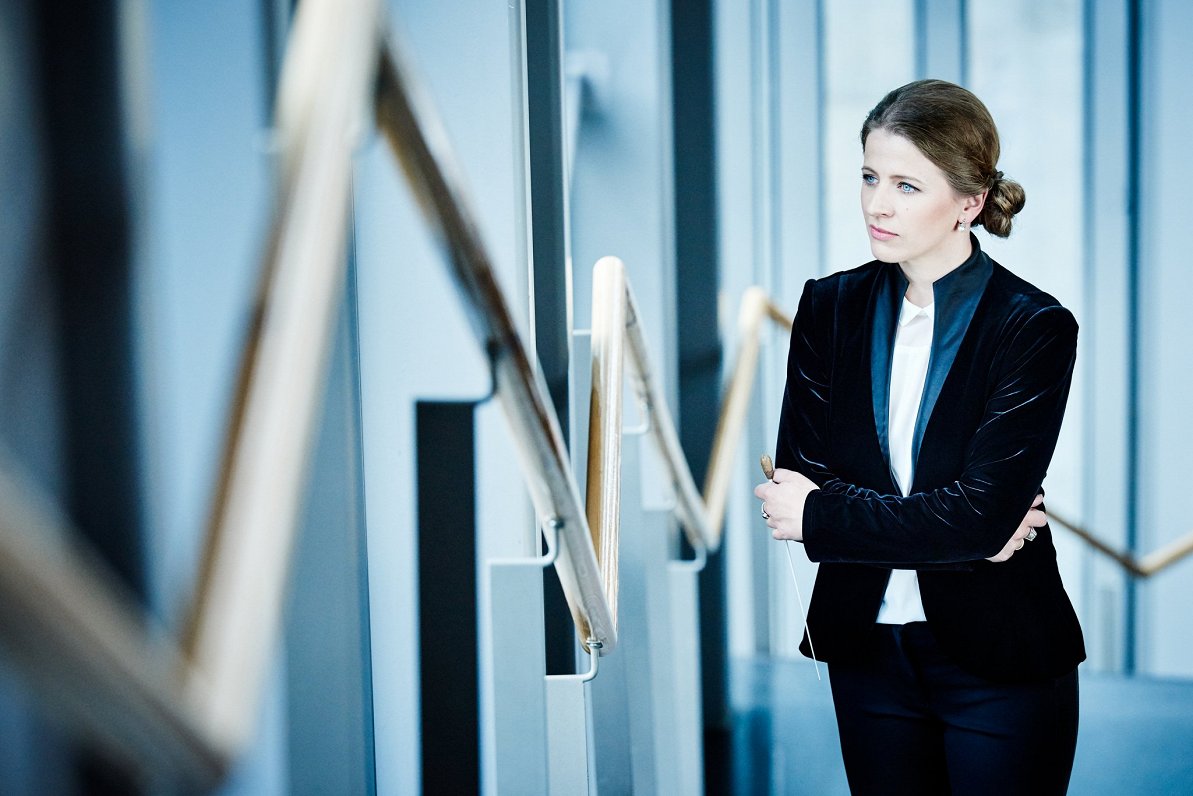 When the Latvian National Symphony Orchestra (LNSO) played with Estonian conductor Kristīna Poska for the first time in November 2017, the collaboration was nominated in the “Concert of the Year” category for the Latvian Grand Music Award. On October 30, Theater Basel’s music director and principal conductor of the Flanders Symphony Orchestra in the Grand Guild, as well as live on Latvian Radio 3 “Klasika” and LSM.lv’s public media portal, will meet listeners in a new program, crowning the Symphony Festival Baltic.

Maruta Rubeze: Did you remember the first collaboration with the LNSO at the Baltic Symphony Festival a few years ago, when the program was nominated with music by Erki Sven Tire and Robert Schuman for the Latvian Grand Music Award as “Concert of the Year” ?

Kristina Poska: Of course, I remember, because this concert, which included Pure Magma with the Freibergs Guntars solo and Schuman’s Fourth Symphony, was definitely one of my highlights.

It was a great pleasure to work with this wonderful orchestra and I was very happy. Since then, we have been trying to find an opportunity for future co-operation, which for various reasons has not been easy, and I am now pleased that this is finally happening. Especially as this is not a good time for concerts, it is rather a luxury and a great privilege to be here again.

Have you had to play in an empty hall this year?

Yes, with my Flemish Symphony Orchestra, when we first met in the summer months after the Covid-19 break, though there were no listeners. This recording, Beethoven’s Seventh Symphony, can still be heard on Youtube.

And where did the road to Riga take you?

I come from Tallinn, which is now my residence, but before that I was also together in several concerts with the Flanders Symphony Orchestra.

Who do you prefer in your creative work? Is collaboration with a special orchestra or program a priority? Have you ever had to choose between several options?

This is a difficult issue. You go back somewhere, then you already know in part what to expect, which is not the case in the first case.

Programs are certainly important, but I have to say, and this is especially true in previous years, that I’ve always been open to everything new, wanted to keep doing more and more new things, because there have been so much to discover though.

There are conductors that make it even at 50, because there is still so much to maintain. But there are also young conductors who are trying to stick to a specific repertoire for better and better results, and maybe do it wisely, but I always want to do something new.

But, of course, the program is important too, and this time it is Jean Sibelius’s Second Symphony, which I will be conducting for the first time in a concert in Riga. Initially, the program included Igor Stravinsky’s “Holy Spring”, which did not emerge because it needed too much orchestra, but I’m happy about this change, because I have admired Sibelius’s Second Symphony for years, and now the desire to play it will come true.

What does practice work mean to you? Are any of your methodologies “developed”, is there anything to avoid in the process?

I try to avoid a routine because, first of all, every orchestra is different, and it’s very important for me to understand what the orchestra itself offers at the first attempt. There are conductors who love to intervene, break up the orchestra every few steps and immediately start working on the details. I don’t usually do that because it’s important for me to let musicians play, to feel how they communicate with each other, what this anonymous communication is like. It’s interesting how the orchestra groups communicate, what sound the orchestra offers, what the balance is, and so on. It interested me first, and then I started working on the material, offering my own version, considering what I had heard as well, and it generally separated me from the routine.

But, of course, over the years comes the experience that it’s best to start working by finding some guidelines from scratch, leaving something else for future endeavors. It’s an experience that I think is a routine in a good way.

So, in general, I try to avoid a routine, but I have to say, it’s not difficult, because even when I open a score, even though I’ve encountered it before , I was always starting from scratch, and this feeling applies to programs as well.

Okay, maybe it’s not zero anymore, but one! (laughs)

It’s like removing previous knowledge and starting over. At one point it was not easy for me and it may have been a bit daunting to go on stage with it, but now I consider it an advantage.

If we touch on a topic like energy – the one that comes from the listeners behind you and the musicians on stage, is it something from the field of esoterics or is it a real thing?

Energy is all that, I have no question whether it is esoteric or reality, for me it is a reality that is also an end result. And I’d say that what we get from the listeners reflects what we’ve been given from the stage. But of course, every audience is different and can react differently to the same orchestra and the same content.

Do you tend to act scoreless?

Yes, and I like to do it. In the past, when I didn’t have so many concerts, I also preferred to hold onto my heart, even a symphony. Now that there have been fewer concerts, many canceled, I have rediscovered this type. I really like it because it’s extra freedom, and I’d love to do it even more in the future, but with fewer concerts. (laughs)

There seems to be a good balance between classical (romantic) repertoire and contemporary music in the programs you host. Should there always be a specific concept, equivalent to coexistence?

Of course, the balance of the program is important, but that doesn’t mean the program should include contemporary music.

In fact, I do this because I think it is very important to play contemporary music, even though listeners may never like it.

This is really the case and it has to do with how our brains work – they like what they already know better and everything that is new at first arouses opposition. But we have to understand that what we now usually play in the second part of the concert is rather new. Because it is a process we are also going through. And, in my opinion, music – whether it was created now or a hundred years ago – is always a reflection of society.

If we do not understand this, as is often the case today, then the question arises – do we understand ourselves? It’s always about ourselves. And sometimes looking at yourself in the mirror is not that comfortable, but it is important if we are to develop. Yes, it is such a sensitive but important issue in many ways. But, of course, balance in the program can be achieved by other means

This time, through you, we meet Lisa Hirsch, a composer whose music is world famous, and we have met and performed in an international composer competition. ”Rostrum ” context. This scoreThreshold ” (threshold, starting point) recently performed in Tampere under your guidance. What is Lisa Hirsch’s Handwriting Typical?

Yes, this piece is special to me, I first showed it in 2017 at the Estonian New Music Days with the Estonian National Symphony Orchestra, and, as the title suggests, it has to do with the beginning, the edge, the threshold, the beginning of silence. the sound is born as we perceive it in our expectations. There’s also a kind of sound that can’t be described in words or words, but yes, it’s about the relationship between silence and wholeness. These are the virtues of spectral music, going into detail, working with timbre colors, it’s a very rich palette, but what appeals to me most is that

Hirsch is a very strong architect of the dramatic structure of the composition, from beginning to end, where as a conductor I am given the freedom of improvisation to choose the order in which the elements proposed by the composer are arranged on this at present.

Of course, this has happened in rehearsals before, but the concert offers an entirely new version again, and for me it’s a new improvisation. So overall, it’s a good play, a development line, but at the same time – a meticulous attention to detail, colors, which also characterizes the quality of the composer’s writing.

Sibelius’s Second Symphony has been performed regularly by our National Symphony Orchestra, including under Estonian conductors Olari Eltsa and Anu Tali. The historical background, the Finnish national awakening, the longing for freedom are often emphasized in the context of this score, but are there any other values ​​to be found in this music today?

Yes, this is often emphasized, and very strong emotional tension can be heard here, which is understandable, but Sibelius himself has not emphasized it. In terms of my feelings, perhaps not in a stylistic sense, but at the core of this music is much of Beethoven, because both are characterized by this path of darkness to light. Sibelius began work on this symphony in Italy, and there is a lot of pastoral nuances in this music, the presence of nature, such as carelessness, but then – in the first part of this symphony he enters his own kingdom of darkness itself, where there is no light at the end of the tunnel. Although this track is not as long here as Beethoven’s Fifth Symphony, it is here as well, and the real struggle is in the last part, and the second part, in my opinion, is an important message about the difficulty of a it seems insurmountable.

And perhaps in fact, we Estonians feel a special connection to Sibelius’ music, and with the darkest part of it, Latvians certainly feel the same way, but we even have a special name for the time that related to the dark pre-winter period, I don’t know how it is in English – depression, perhaps the kind of oppression I hear so well in Sibelius’ music.

And right there is an extreme desire to get out of it, to strive for this light, and when this light finally appears, it is so bright that the eyes are literally burning.

Because I don’t see the need to see this symphony in the historical context of a nation, but for me it is the path of the human soul, which is why there are composers close to me who talk about essential, essential things, because there is a path the soul, this persecution of light, is programmed in us. And Sibelius shows it in such an incredible way, going this way in all its nuances and depths. It was a long description, sorry.

At one time there was a radio tower in your home town of Estonia. This is Radio Latvijas’ 95th birthday week, and we are happy and delighted that Radio 3 “Klasika” will be able to offer this live concert this anniversary. What is your relationship to even newer radio and other media formats?

This relationship is definitely good and nice, but when thinking about the time we’re in now, and of course, even though radio can’t replace a live concert, we appreciate the fact that we’re still to be able to reach such a wide audience – be it radio, or television, or some other way.

What is masculinity? A charity photo calendar has been created, and with the help of it is hoped to update the health of Latvian men – Health – News