The first Iokta Kokara Choir Award is a Japanese choir 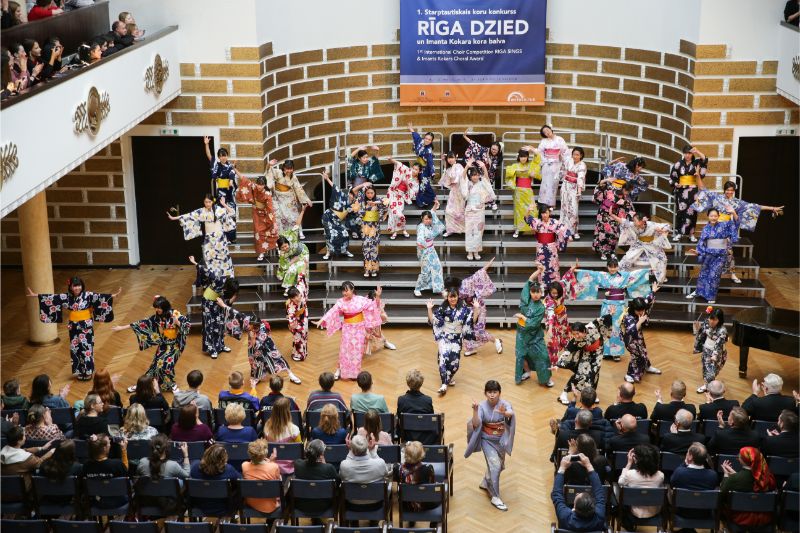 On Saturday, May 4, the choir's competition from the First International Choir Competition “Riga Sings” ended, the choirs from 11 countries took part in the competitions, the main prize – “The Imanta Kokara Choir Award”, the organizers.

Winners of the competition categories are: t

The performance of the choirs was criticized by a professional international jury including Peters Haberms, who has worked for many years with Friedrich Krell as deputy artistic director of the Radio and Television Broadcasting Choir (Rundfunkjugendchor) in Vernigerode. The Children's Choir organization later became very successful until it became Artistic Director of Rundfunkjugendchor in 1996, still a singer, spokesman and active member of the INTERKULTUR event and the German Choir Competition Jury.

The jury was Martins Klišāns, who is currently the conductor of the mixed choir “Vaidelote” and the mixed Valmiera choir, as well as the main leader of the Cissis area. Mārtiņš Klišāns was elected as lead leader of the General Song Festival in 2008, 2013 and 2018; he has also been one of the leading leaders of the IX and X Latvian School Song and Dance Celebration. In 2015, Mārtiņš Klišāns won the highest state prize – the Three Star Guild.

Aira Birziņa also represented Latvia in the jury, and since 2000 was the Riga Dome Ladies Choir “Tiāra”. She's one of the most distinguished leaders in Latvia who works mainly with women's choirs and teaches choral conduct at the Jāzeps Vītols Academy of Music. For many years our main conductor has been the famous female choir "Dzintars" (Riga) and "Rasa" (Ogre). Aira Birzina is also one of the leading leaders of the Latvian Song and Dance Festival (XXIII, XXIV, XXV, XXVI).

Meanwhile, Tove Ramlo-Istada, who represented Norway, has been holding Cantus of Women since the beginning of 1986. Cantus has had great success, won several competitions and is renowned for its Nordic sound. Because of this sound, the Disney Cantus studio opened and the choir chose to sing in the film's Frozen animation. Tove Ramlo-Istada is the music director of the Norwegian Choir Society, and one of the main tasks is to improve the education systems of Norwegian choral conductors.

The jury representative Marleille De Bo loved the choir's music at an early age, singing in the Valranta Youth Choir. After finishing her music studies at Lemden Institute in Leuven, where she gained her masters degrees in music pedagogy and choral leadership, she became artistic director of this choir. At the Royal Conservatoire in Antwerp, we teach an academic postgraduate course called "Child Support and Youth Choirs".