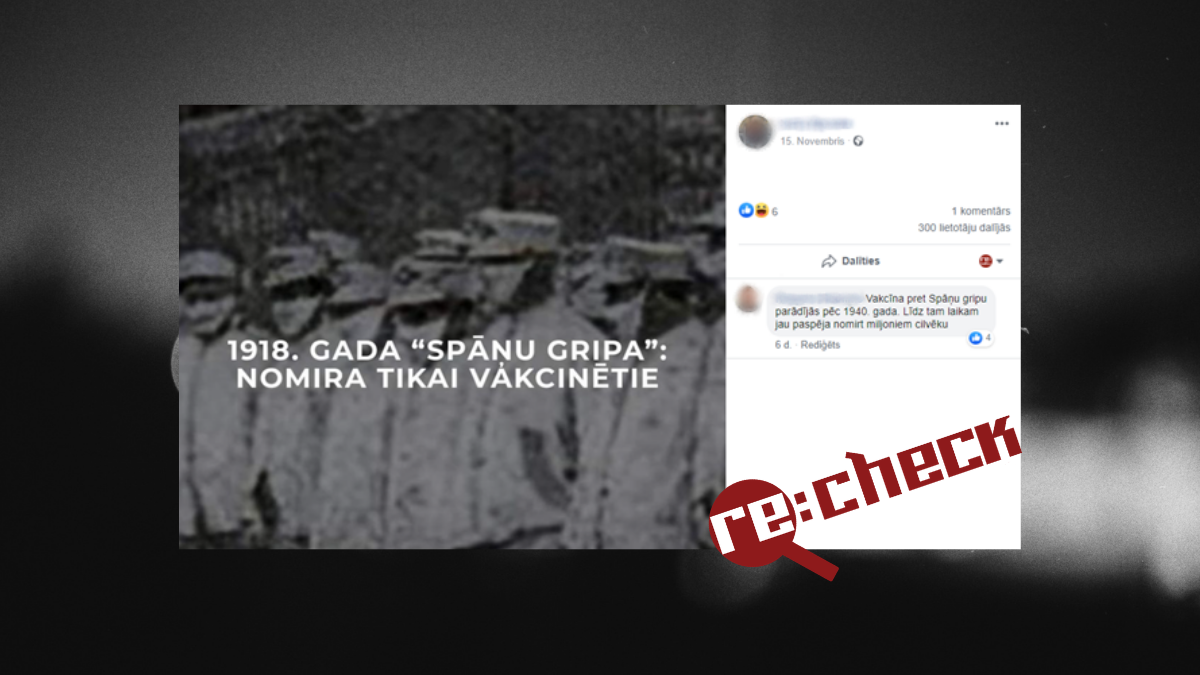 On social media Facebook the 1918 ‘Spanish flu’ record has emerged. He notes that “only vaccinated people died”. But that’s not true. At the time of the Spanish flu, there were no vaccines against it.

Someone Facebook On November 15, the consumer posted a photo stating: ‘1918. “Hispanic influenza”: only vaccinated people died. “The false statement was shared by 300 people.

The so-called Spanish flu spread worldwide in 1918-1919. a year. However, there is still no consensus on exactly where this virus originated. It is estimated that around 500 million people, or about a third of the world’s population at the time, were infected with the ‘Spanish flu’. Deaths vary from source to source, but the most common cause of death is around 50 million. The First World War was also important for the spread of the disease. Compression, mobilization of forces and refugees are likely to have contributed to the spread of the disease worldwide.

In 1918, the “Spanish flu” also arrived in Latvia, on the public media portal lsm.lv writes the historian Jānis Siliņš. For example, in a few months more than 3,000 patients were registered in Riga, but in Liepaja 82 people died of this disease within a month. It has also been reported that influenza has wiped out entire families in many rural areas.

US Center for Disease Prevention and Control (Communicable Disease Control) noted that there was no effective flu vaccine or antibiotic at the time. Thus, the virus was fought worldwide through isolation, quarantine, personal hygiene, use of disinfectants and restrictions on assembly. The first flu vaccine was only developed in the 1940s.

Similar allegations that only vaccines died from Spanish influenza have become popular in English. For example, news agencies Reuters a AAP similar checkers have been refuted by fact-checkers in the past.

Collection: It’s not true that only vaccinated people died of “Spanish flu”. 1918-1919 The disease caused the deaths of about 50 million people in 2006, also affecting Latvia. However, the first flu vaccine was not developed until the 1940s.

This article is part of Re: Check’s work of checking for possible fake or semi-fake Facebook entries, images and videos. Read about Re: Check Facebook’s collaboration here.

All Re: Check read the articles HERE!

About the project: Re: Check is a virtual fact-finding lab and social network research under the auspices of the Baltic Center for Investigative Journalism Re: Baltica. We use five possible marks and colors to evaluate the verified facts: in fact (statement correct and factually verifiable), close to the truth (statement is mostly true, but minor errors were made), half truth (statement contains true and false information, some facts are omitted), rather not true (the statement contains cryptic truths but does not take into account relevant facts and / or context, so the statement is misleading or out of context) and not true (the statement is not true, there is no evidence for it, the author of the statement unwittingly misleads or tells a lie). The score is given by agreement of at least two editors. If you also see a suspicious statement, please send it to us at [email protected]

Now also give with Mobilly! To do so, find our brand in the in-app gifts section and follow the instructions below.