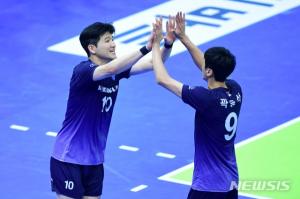 Jung Ji-seok added 4 serve points and 1 blocking point. Unfortunately, he failed to achieve the triple crown because he lacked one blocking.

On this day, Samsung Fire & Marine Insurance surpassed 28,000 points for the first time in the history of professional volleyball.

Korean Air, which took the first set with Lim Dong-hyuk ahead of it, was knocked back by Samsung Fire Insurance in the second set.

Korean Air tied Samsung Fire & Marine Insurance to 11 points in the 3rd set and picked up the win.

Korean Air, which offered 4 sets, showed concentration in 5 sets. In the position where they faced tightly with 3-3, they fled to 8-3 with Kwak Seung-seok’s back attack, Lim Dong-hyuk’s open attack, and Jung Ji-seok’s ongoing substrate. After that, Jung Ji-seok scored 3 goals in a row at 12-9 and finished the game.

Samsung pressed Fire & Marine Insurance to reduce the lack of hindsight. Bartec scored only 5 points in the 5th set, but it wasn’t enough.