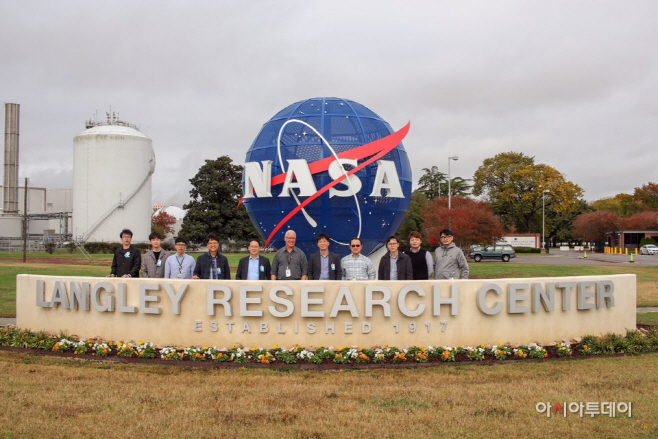 Inha University of the Institute of Space Science and Technology (IST) – the NASA Langley Research Center visited the Langley NASA Research Center earlier this month to research the technology of the Solar Sail on the 18th element, while checking progress of joint research on Korea and discuss future plans. Next month, NASA officials will visit Inha University to discuss specific joint research instructions.

The team, including Professor Kim, Jae-Hwan, Ki-Woo Kim, Ju-Hyung Kim and Professor Kang Jae-young discuss the core technologies needed to develop the auditor after several visits to the Langley researchers during the visit.

In particular, they focused on technologies that allow the spread of more than 400m of film, the core technology of solar saucers, with only 1/10 hair (less than 3) in thickness, and the development of space materials and can withstand extreme space environments.

Sailing shed can accelerate up to 30% of the beam with a space searcher that uses the radiation pressures produced by the sun-emitted photons. Theoretically, for three weeks, you can fly from Earth to Mars, known as a dreamer.

Meanwhile, Dr. Robert Moses, who is responsible for the development of the residential system with people in a mid-month lunch examination and examining Mars, visits the Inha University directly.

Inha University also agreed to hold a graduate student exchange program with the National Aerospace Institute (NIA), the Langley Institute agreement. As soon as possible, the program will run from next year. The NIA is a coalition of eight universities, including Georgia Tech and Virginia Tech, which are prestigious universities in the United States.

The University of Inha is working on the "Helios Project", an agreement made between NASA Langley Institute in March last year and the Space Act Agreement (SAA), a private agreement allowing NASA to participate in research space development

In April the same year, IST-NASA established the International Joint Research Center for Audit and Placement,

"The IST-NASA International Space Research Center will investigate and develop the core technology of the next generation of space space producer Solar Sail, through NASA research," said Kim Ju-hyung, head of IST-NASA Center for Space Inquiry International. He said.