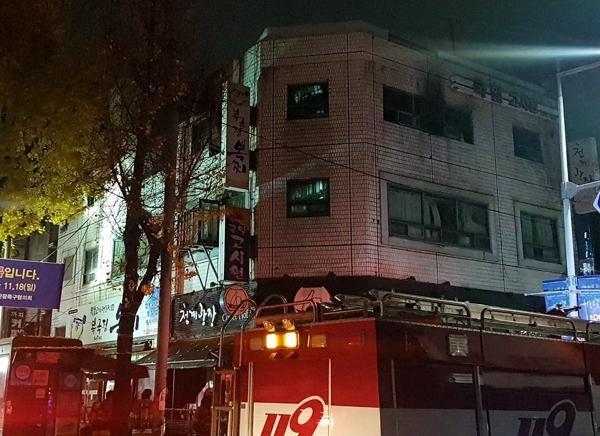 About 5am on 9th, 12 people were killed and 12 were killed when a fire broke at the Gosiwon near Cheonggyecheon Cheonggyecheon, Jongsu-dong, Jongno-gu, Seoul. It is said that more than 50 people live in the burning Gosúon. "There is a possibility of more casualties," says the fire department.
According to Jongno Fire Station in Seoul, it is estimated that the fire occurs on the third floor of the building. 18 people who were drinking toxic gas were transferred to Severe Sinchon Hospital, Soonchunhyang Hospital and Anamam Hospital. Six of them are now dead.

Fire officer said, "The fire is believed to have occurred between 301 and 302. It is believed to be difficult to move due to the location of the fire close to the exit."

The firefighters arrived at the site at 5:05 a.m. on the day, and held a big fire at 5:31 a.m. I've been fully developed around 7 am, about two hours after the fire happened.

Kim Bum-gum, minister of public administration and security, visited the fire scene at 7:30 a.m. on the day.

The police and the fire department investigate the exact scale of damage and the cause of the fire.