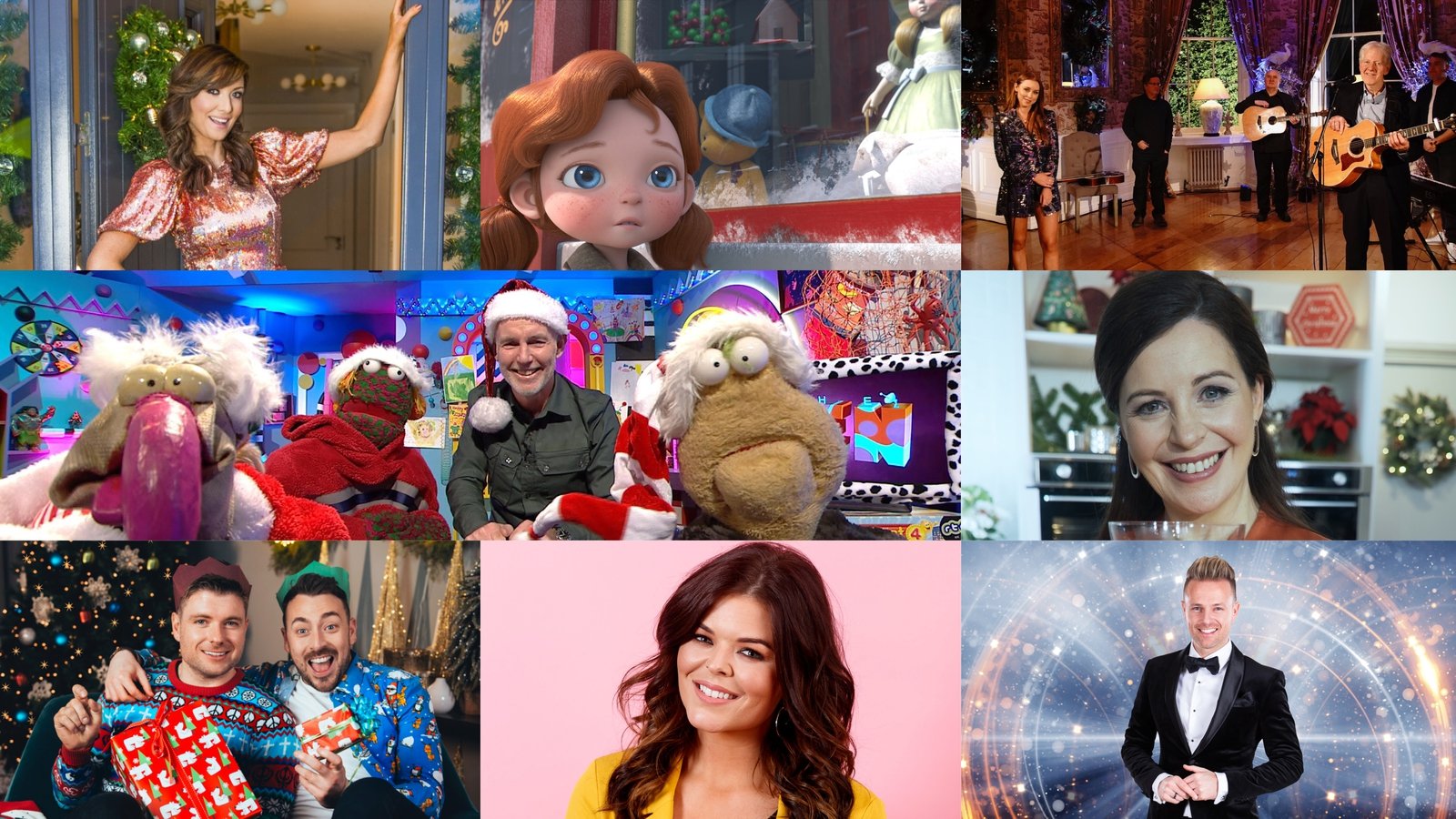 This Christmas, we all need fun and escape like never before – here are our top choices.

There’s nothing like movies to distract you from the outside world for a couple of hours and there will be plenty to choose from on RTÉ including the premiere on Irish television Angela’s Christmas Wish flying on Christmas Day.

This heartwarming animated story from Ireland’s Brown Bag Films is the sequel to the Emmy nominated special, Christmas Angela, and tells the story of a determined little girl who sets out to reunite her family in time for the Big Day.

Based on characters by author Frank McCourt, it features the vocal talent of Ruth Negga, Jared Harris and Catriona Balfe.

Other Irish film premières include Old Dublin School, starred Emmet Kirwan; Zoo, about a young boy and his friends rescuing a baby elephant from Belfast Zoo during World War II; and special animation, The Coat, by a Dublin animation house, Giant, with the main character voiced by Cillian Murphy.

Jennifer Zamparelli and Nicky Byrne get their spark back to remember more barefoot and non-fancy times as they look back over some magical moments in an hour-long Dancing with the Stars special.

The whole family will also love it Christmas Den y Special as the rebooted series comes to a close. Join the madness and chaos with Ray, Zig and Zag and Dustin for a final hooley, some special guests and maybe even a tear or two.

On December 31 the whole family can join a special program New Year’s Eve Counts with music, comedy and live chat from The Gaiety Theater in central Dublin.

Yes The 2 Johnnies, the likely lads from Cahir in Tipperary who are motivated to set Christmas on fire.

Fans can look forward to two stunning new episodes of Mrs Brown’s boys on RTÉ One on Christmas Day and New Year’s Eve, where we see how Mrs Brown and all the crew at Finglas are coping with a lockdown.

We all know that 2020 is a year like no other so who better than Oliver Callan to take a tumble through a year we will all be glad to see back, in Callan Kicks the Year.

On the RTÉ Player, Riling in the Fears, written by Joanne McNally and presented by Doireann Garrihy is a satirical and chaotic look back at 2020.

In The Kingdom of Fungi, Baz Ashmawy makes the trip to Dingle following the disappearance of the Dingle Dolphins to explore the magic and mystery of the shameless, lonely wild dolphin that made Dingle Bay his home for 37 years.

In The Real Field, The son of John B Keane, broadcaster and writer Billy Keane, goes in search of the truth behind the murder that inspired his father’s most famous work.

Nicky Byrne presents Soundtrack To My Life featuring the RTÉ Concert Orchestra playing a selection of the biggest hits and familiar floor fillers with Kodaline and special guests including Jack L and Loah.

Nashville Queen Dolly Parton joins Ryan Tubridy for stargazing Country Christmas Country Special Christmas Special on December 11 and our own Irish country stars will also be on hand with some of their own favorite Christmas hits.

This year marks the 25th anniversary of the founding Riverdance with a special birthday show, and in Clannad: A Celtic Dream, Bláthnaid Ní Chofaigh travels to Donegal to meet the band and reflect on a remarkable fifty year tour.

Don’t miss The Bus – A Decade of Christmas on Grafton Street on December 18, an unforgettable evening celebrating the best of Irish music, songs and stories.

RTÉ, along with the Creative Ireland Program, is calling on Ireland to #ShineALlight on December 20 to create a national moment of unity on the eve of winter 2020 solstice.

RTÉ will present an event that will include a live program on RTÉ One, a special radio program on RTE Radio 1, and six spectacular projection installations at locations across the country in the days leading up to Shine Your Light – Sunshine.

2020: A Year in Review looks back at a strange year when the world watched as America voted in a new President, the UK ready to leave the EU forever and Taoisigh roaming Ireland struggling to save lives.

And on News2Day, Aisling Moloney and Mícheál Ó Scannáil look back on a year of huge upheaval for everyone, including children.

And especially for those younger viewers, Growing up at the end of the world is a fascinating documentary that follows three teenage climate change activists.

This Christmas will be the climax of the first ever winter GAA Championships with the All Ireland Finals in Football, Hurling and Camogie all showing live on RTÉ2 and RTÉ Player Saturday Live Game a The Sunday Game Live.

Also featured will be live coverage of the men’s and women’s FAI Cup Finals, Champions League Live and the Leopardstown Christmas Festival, starting on Boxing Day.

On Saturday 12 December, the All Ireland Camogie Final and the Women’s FAI Cup Final will take the lead on a fantastic Saturday of women’s sport across RTÉ.

For off-field drama, Fair City continues to capture Carrigstown life through a lens, with residents, like us all, responding to the challenge of a different kind of Christmas this year. And we caught all the action from Albert Square in Eastenders Christmas Special on RTÉ One on Christmas Day.

On Christmas Eve and Christmas Day, RTÉ Television and Radio offers a rich variety of seasonal religious content, with Carols, Masses, Services, Christmas Messages and even a special Birth of Cork.

Especially for younger viewers, this Christmas there are 10 brand new two-minute animations including Christmas Owl, Christmas version of TV Crittersusing the Late Late Toy Show photos, a Good Humbug , an animated story about a gripping old man discovering the true meaning of Christmas.

The Christmas Food Special Show back with Neven Maguire, Rachel Allen and Kevin Dundon plummeting a Christmas feast to some lucky celebrity restaurants across three nights at 6.30pm on RTÉ One during Christmas week.

Neven’s Christmas Menu will cover everything you need to know to produce the perfect spread on Christmas day, and this year Donal Family Food at ChristmasIt’s all about spending time with the family, keeping up traditions and creating great family meals.

Rory O’Connell is also back with another two-part Christmas special, How to Cook Well, over two nights during Christmas week and Catherine Fulvio returns with a Christmas cooking special, Catherine Celebrates , for those who want to try something a little different this year!

Entertainment continues on the airwaves across RTÉ Radio 1, 2FM, Lyric and RnaG this Christmas. On December 22, the Ray D’Arcy show will pay homage to all the wonderful Charity Calendars that have been sent in from all over the country.

Although different from previous years, Live line it won’t let Covid-19 stop their Christmas Eve special in 2020. This year, Joe Duffy and his friends will be entertaining listeners at their home place on Grafton Street in Dublin, with guests including Kodaline and many more shares some Christmas wishes.

Derek Mooney will have a direct line to Santa Claus on Christmas Eve, making sure he is on his way to all the homes around the country, while Panti Bliss goes to the fireside offering comfort in a year that has changed all that of us.

At 6pm on 2FM The National Chart Show with Bláthnaid Treacyannounces Christmas No.1 this year as well as the replay of all No. 1 of the year 2020.

St. Stephens Day gives us all time to reflect as Joe Duffy presents Legacies. And Callan’s Kicks looks back on the unforgettable year that features readers, experts and covidiots, Shinner winners and Golfgater hats.