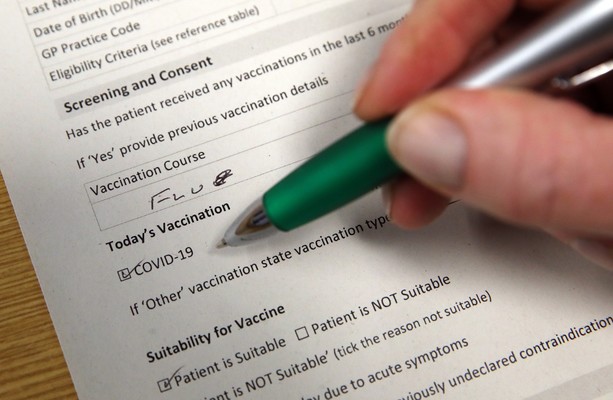 As we move closer to releasing a vaccine for Covid-19, people are keen to know how well the vaccines that have been developed are working and the groups of people they have been tested on.

Some discussion has emerged in Ireland in recent days about whether vaccines, such as those from Moderna, Pfizer, and AstraZeneca, have been tested on groups of older people.

Speaking on RTÉ’s Claire Byrne Live on Monday, November 30, Professor Sam McConkey said that most people who enroll in vaccine trials are aged between 18 and 55.

McConkey, an infectious disease specialist at the Royal College of Surgeons of Ireland (RCSI), said, “if we had a vaccine that would be 100% effective in preventing death in the elderly, in people aged over 80, over 90, and in those who vulnerable. , and also to prevent transmission to other people that was widely available then that would be very good ”.

Several vaccines have now undergone three key stages of clinical trials and are looking towards worldwide distribution. During clinical trials, a number of factors are investigated, including:

Let’s take a look at three of the front-line vaccines from Moderna, Pfizer, and AstraZeneca and the extent to which their clinical studies involved people of older age groups.

Moderna’s vaccine – mRNA-1273 – began its Phase 3 clinical trial in July, which involved 30,000 adults at research sites in the United States.

Early results of the clinical trial found that the vaccine, which Moderna hopes to have 20 million doses ready by the end of 2020 for dispatch in the US, has been shown to be 94.5% effective.

Moderna is currently filing for vaccine authorization from the US Food and Drug Administration (FDA) and the European Medicines Agency (EMA).

Eligibility requirements in the trial included the need for participants to be 18 years of age and older and had not previously participated in a Covid-19 vaccine or treatment study.

Applicants needed to be healthy with no previous history of Covid-19, and if they had any pre-existing medical conditions, their conditions needed to be stable at the time of screening.

The study looked for participants who were at high risk of Covid-19 infection because of their locations or circumstances, or at risk of severe Covid-19 because they were over 65 or had an underlying medical condition. 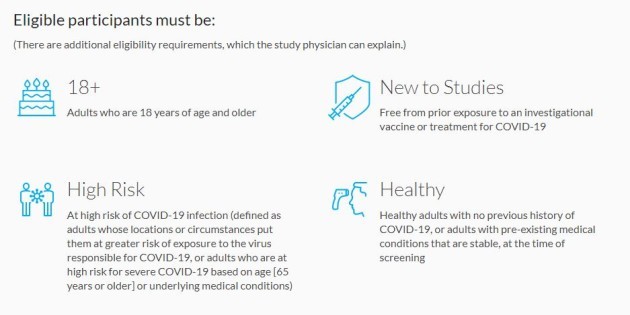 Over 7,000 people over the age of 65 were involved in Phase 3 of the Moderna clinical trial. Participants in the Moderna vaccine Phase 3 trial include:

By comparison, according to the United Nations Department of Economic and Social Affairs, 9.3% of the world’s global population is over 65 years of age.

The UK has formally approved the vaccine developed by Pfizer and BioNTech, which is authorized by the UK Medicines and Healthcare Products Regulatory Authority (MHRA) for emergency use.

The Pfizer vaccine has been shown to be 95% effective with no serious side effects in its clinical trials and has passed its safety checks.

Pfizer and BioNTech have said they plan to produce up to 50 million vaccines globally in 2020 and up to 1.3 billion in 2021.

In a statement, the UK Department of Health and Social Care said that after months of clinical trials and “rigorous” data analysis, the MHRA “concluded that the vaccine had met its stringent safety, quality and effectiveness standards”.

“The Joint Committee on Vaccination and Immunization (JCVI) will shortly publish its final advice for the priority groups to receive the vaccine, including care home residents, health and care staff, the elderly and those who is extremely clinically vulnerable, ”said the department.

The vaccine is expected to be available in the UK from next week.

The recent clinical trial of the vaccine enrolled 43,931 participants, of whom 42,722 received the second of two vaccines.

The vaccine was studied at 150 clinical trial sites in the US, Germany, Turkey, South Africa, Brazil and Argentina. Across sites internationally, 41% of participants are aged between 56 and 85 years.

In the US, 45% of participants are in the same age group.

The effectiveness of the vaccine was “consistent across age, gender, race and ethnicity demographics”.

The study observed efficacy of over 94% in adults over 65 years of age.

No news is bad news
Support The Journal

The AstraZeneca vaccine developed at the University of Oxford has been clinically tested under two different dosing regimes.

The first regimen tested, which included a halved first dose and a standard second dose, was found to have 90% efficacy.

In a study on the safety and immunogenicity (ability to induce an immune response) of the vaccine during the second phase of trials involving 560 participants:

Adverse responses to the vaccine decreased as age increased, with fewer adverse events being reported in the older age groups than among 18 to 55 year olds.

The study found that antibody reactions in both older age groups were “similar to those seen in younger adults”.

“Similarly, after a second dose of the vaccine, antibody levels increased, and this was also consistent for the older age groups.”

The study notes that “a further assessment of the effectiveness of this vaccine is warranted in all age groups and individuals with comorbidities” and that more consideration needs to be given specifically to those living in residential care settings or over 80 age.

“Larger studies are now underway to assess immunogenicity, safety and efficacy in older adults with a wider range of comparisons.”

In the latest vaccine clinical trials, which enrolled 24,000 participants from the UK, Brazil and South Africa, Oxford University has said that the provisional Phase III data “builds on the results of the peer-reviewed phase I / II trials in Oxford which has shown that the vaccine induces strong antibody and T cell immune responses across all age groups, including older adults, and has a good safety profile ”.

Covid-19 vaccines like those of Moderna, Pfizer, and AstraZeneca have essentially been tested among older age groups, and older people have included significant proportions in the clinical trials of each vaccine.

For the two for whom data were shared – Pfizer and AstraZeneca – the effectiveness of the vaccines in older people has been in line with the results on a broader scale. Ongoing studies into the vaccines are ongoing.

The next phase of clinical trials – Phase Four – will include follow up with participants in the coming years.

TheJournal.ie’s FactCheck is a signatory to the International Fact Check Network’s Code of Principles. You can read it here. For information on how FactCheck works, what the verdicts mean, and how you can get involved, check out our Reader’s Guide here. You can read about the team of editors and reporters working on the fact checks here.