Arecibo, the telescope that sends signals to aliens, will be dismantled 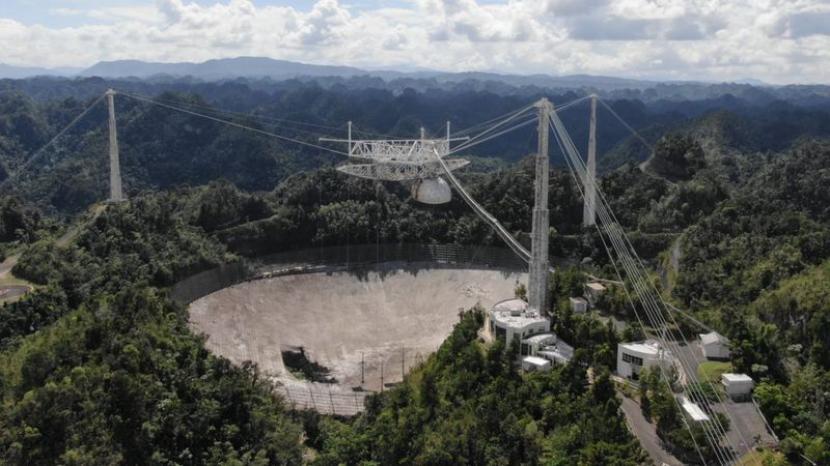 The Arecibo telescope sending signal to the aliens in 1974 will be deactivated.

REPUBLIKA.CO.ID, PUERTO RICO – The iconic Arecibo telescope in Puerto Rico will be deactivated. And yet, its multilateral legacy will continue. This telescope has been in operation for 57 years.

There was so much damage that it forced the radio telescope to dismantle. Repairing this damaged radio telescope repair puts the lives of the technicians who repair it at risk.

Reported on Sk of the Earthy, Friday (20/11), on November 16, 1974, the Arecibo telescope in Puerto Rico was used to deliberately send the strongest broadcast sent into space. The aim is to try to find alien life.

The broadcast is part of a ceremony to mark the huge upgrade to radio telescopes. Some have praised the event as a thought-provoking attempt to remind people in 1974 that the Earth is probably not the only planet where intelligent civilizations have evolved.

Designed by Cornell astronomy professor Frank Drake, with input from other scientists including Carl Sagan, the broadcast is simple and elegant. This signal contains a binary number pattern.

These messages include information on the basic chemicals of life, the structure of DNA, the place of the Earth in our solar system, and even the human figure. It took three minutes to send 1,679 pieces of information, a very fast speed compared to modern computer modems.

According to the SETI Foundation, the broadcast was very powerful because it used a Arecibo megawatt transmitter mounted on a 305 meter high antenna.

The emissions are equivalent to 20 trillion watts of omnidirectional transmissions, and SETI experiments would find them anywhere in the galaxy, assuming the receiving antenna is similar in size to Arecibo.

The 1974 signal went out towards M13, a spherical cluster of stars that rotates in the center of our Milky Way galaxy. The venue was chosen mainly because it was a large collection of stars available in the sky at the time of the ceremony

The spherical star cluster is very far away. M13 is about 23 thousand light years from Earth. The 1974 signal is now 46 light years away from us.

Arecibo is designed to be dismantled amid security concerns. A review found that damage to the ‘dish’ of the 305-meter telescope was at risk of collapse, following damage to its support system. He concluded that large structures could not be repaired without potentially causing a fatal risk to construction workers.

“The NSF prioritizes the safety of workers, Arecibo Observatory staff, and visitors, which makes this decision necessary, though unfortunately,” said Sethuraman Panchanathan, director of the US National Science Foundation (NSF), which is funding the telescope.