Thousands affected after Delhi Metro Snag On the Yellow Line, Jams were reported 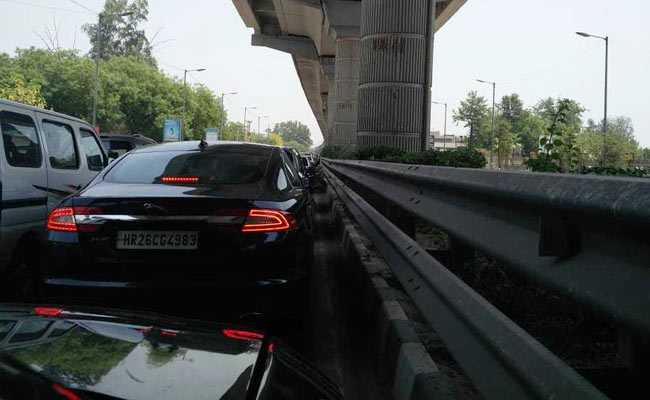 Traffic congestion in Delhi and Gurgaon was reported after the Yellow Line line.

Thousands of commuters in Delhi and Gurgaon were stuck this morning after metro services on the Yellow line were affected by technical problems.

Delhi Metro Rail Corporation (DMRC) has said "repairs are underway between Qutub Minar and Chorstarpur metro station". The services are "partially normalized" between the two stations. "The single line is currently active," the DMRC tweets. Passengers from two trains between the two metro stations were moved this morning after affecting the services, the DMRC had said earlier. Yellow Line links Samaypur Badli in Delhi to Huda City Center in Gurgaon.

Movement train has to be partially partially between Qutub Minar and Chhattarpur. Single line currently operational. We will update you.

Metro Delhi hosted feeder services between Sultanpur station and Qutub Minar after passengers were left behind at the metro stations.

I have asked the transport minister to request a detailed report and direct Delhi Metro to determine responsibility https://t.co/0jkf9HvfKb

On Twitter, people shared videos and pictures of commuters walking on metro tracks after power failure at metro stations.

Huge power failure in Delhi Metro and yellow line services is coming to an end, people were asked to walk out on the metro tracks. AFC gates even don't work. @OfficialDMRC#dmrc#Delhipic.twitter.com/D7njCVxqKQ

Some social media users also complained about traffic congestion due to disruption to metro services.

Heavy traffic on NH8 because metro line operation delhi closed after Hauz khas, electricity cable broke down on metro roof. Evacuation is underway through emergency gates on a metro track. Avoid a yellow line to commute for the next two hours. Stay safe.

A user has also tweeted about "evacuation through metro gates"

Get the latest election news, live updates and election timetable for Lok Sabha 2019 Elections on ndtv.com/elections. I'd like us on Facebook or follow us on Twitter and Instagram for updates of each of the 543 parliamentary seats for the 2019 Indian general elections. The results will be on 23 May.