The shots were heard on the night of December 6, 2008 at Exarchate, acted as a catalyst that allowed the beginning of a rebellion that seemed to “simmer” for a long time.

The murder of the then 15-year-old boy Alexandrou Grigoropoulos by the special guard Epameinonda Korkonea was the spark that lit an unprecedented explosion wick whose sound was heard all over the planet.

However, the conflict that ensued in the following days could have led to new tragedies. This is because between the many and difficult moments of the day, there have been two events that, although largely forgotten today, could have led to new tragedies and, as is easily understood, in a climate of In turn, this would lead to uncontrollable situations.

Those were the two moments when closure surrendered to dangerous gun games.

The armed mobster on Alexandras Avenue 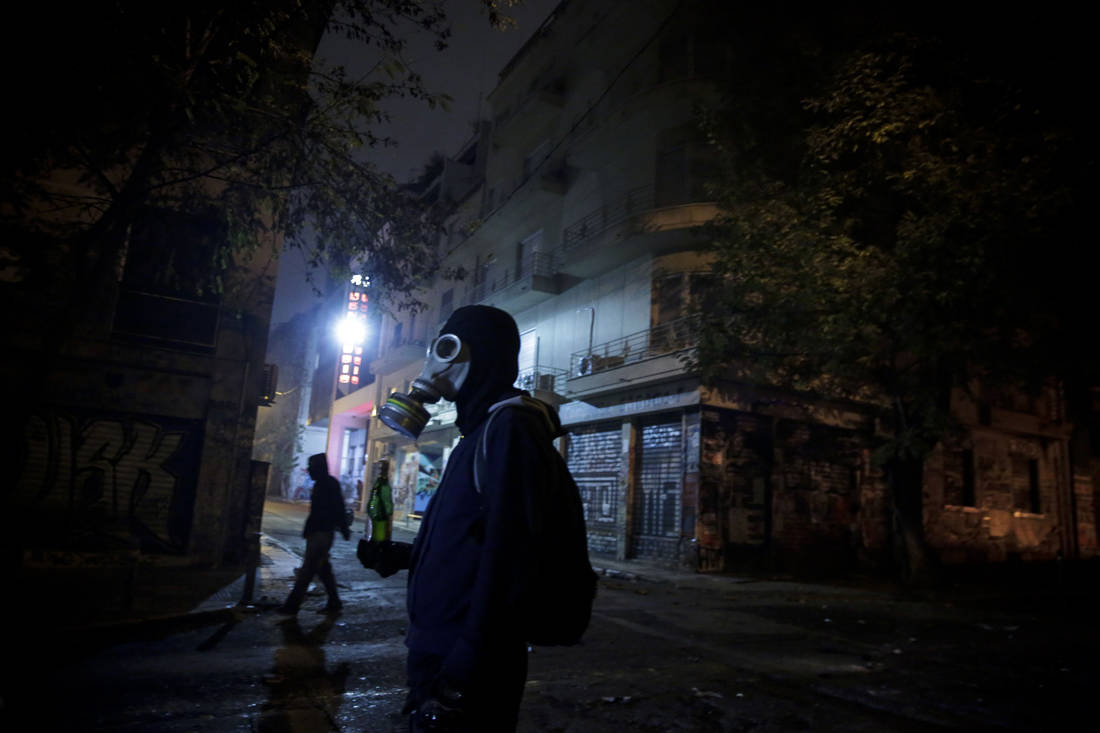 Sunday, December 7, 2008. noon. After a night of fierce clashes and violent clashes in central Athens, thousands of people on the law student initiative gather at the Museum, on Patision Street, to reach the Directorate General of Attica Police to protest against police violence that resulted in the loss of a child’s life.

After the spontaneous confrontation of the first night, this gathering was the first organized response to what had happened. However, this course will never reach its destination. Almost immediately after the start of the procession, groups of young people emerge from the blocks and in a coordinated way begin to cut and burn whatever they find in their way.

Within a few minutes, Alexandras Avenue is like a battlefield. The anger is huge. The checkmate they had a clear routine to remain in their positions until the course arrived just before the height of Charilaou Trikoupi and there to respond to the episodes and arrest the perpetrators. Meeting the two warring parties creates hell.

One could hardly breathe from the tear gas and chemicals but also from the numerous and large fires. The protesters manage to reach the corner of the Supreme Court. There were very strong MAT forces that prevented them from advancing. Thus the events and conflicts were “channeled” into the strait of the region. 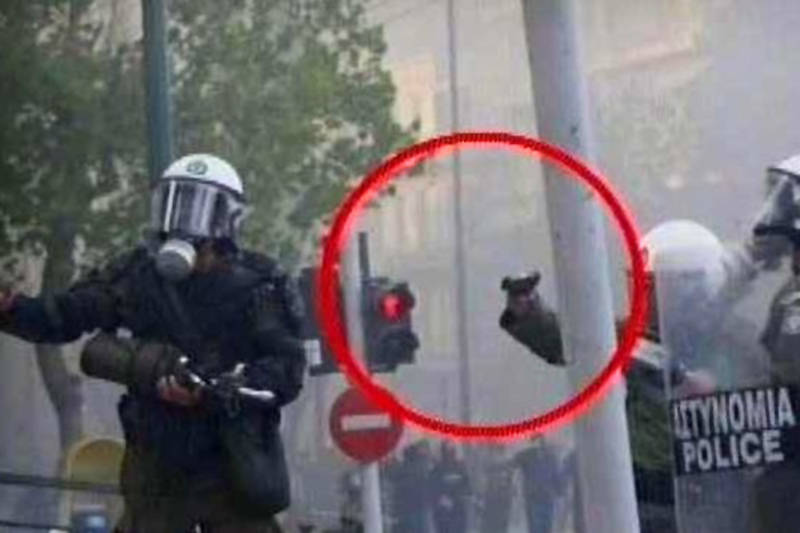 At 16:36 in the afternoon at the intersection of Kirillou Loukareos Street with Alexandras Avenue, a MAT policeman pulls out his gun and identifies the protesters! Everyone “freezes” in front of the image of the armed policeman just hours after Grigoropoulos’s murder. Next to the bully, a colleague forms the gun with his fingers and also marks a show of immaturity. Protesters try to hide behind parked cars for fear of the worst.

His photographer is on the spot Free Press The cost of Tsironis immortalizes the snapshot. After shouting and realizing he is being seen, the policeman puts the gun in place, without firing a shot and leaves with the rest of the squad from the point of tension.

An indication of the climate that existed in those days is that K. Tsironis was fired from the newspaper when he clashed with his management for the reasons the specific document was not published the following day. Many thought that the newspaper had tried to censor the photographer so as not to throw “oil on the fire”. The photo was distributed to major photo agencies abroad and finally two days later was published in the Free Press.

The “Zitades” he shot shortly after Grigoropoulos’ funeral 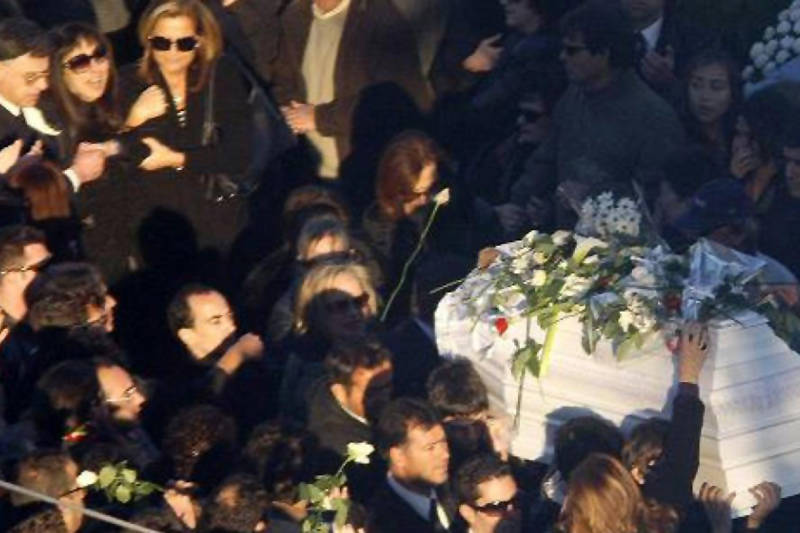 Tuesday, December 9, 2008 was perhaps the most emotional day. This was the day that thousands of people gathered at Paleo Faliro cemetery to accompany Alexis to his final home.

The mother of the grieving 15-year-old can hardly be forgotten about losing her son and the Nikos Romanos, A friend of Grigoropoulos, who cooled in his hands, to be one of the bearers of the white coffin. 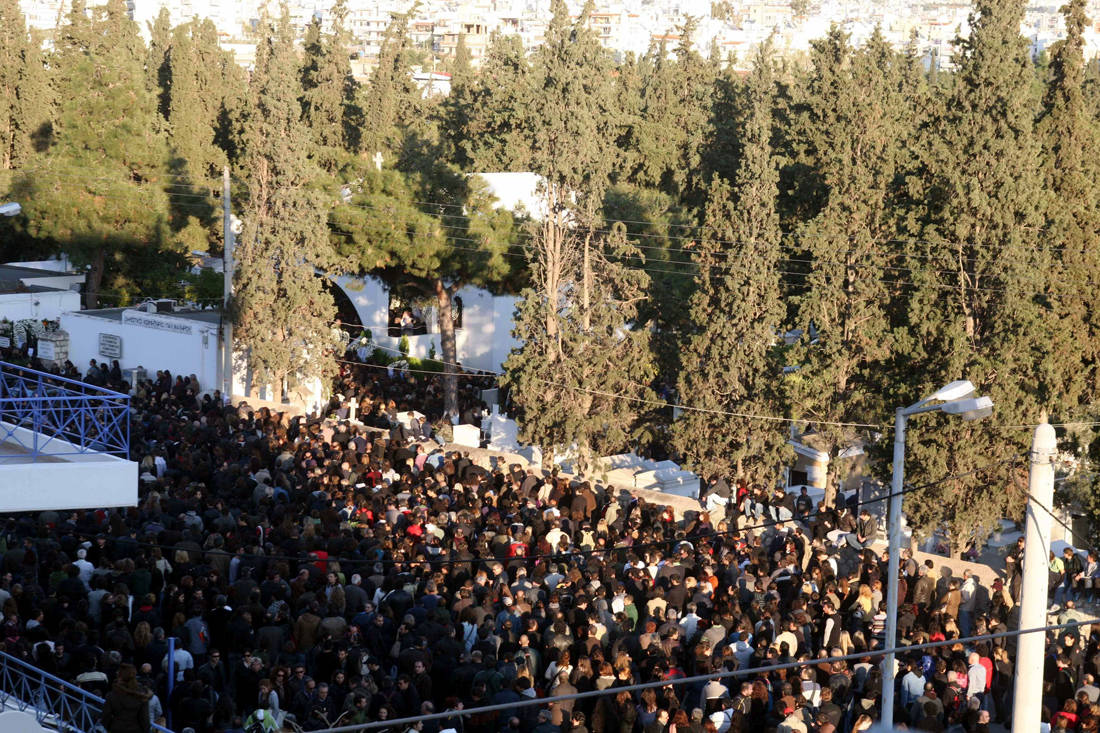 The funeral soon turned into another protest against police violence. The emotions were numerous and the intense police presence only worked.

When the ceremony was over and the deceased’s family left the scene, the first fiery roadblocks were set up and the chapters didn’t take long to begin. The more time elapsed, the more intense and violent they became.

Given that the toughest and longest confrontation was caused last night rebellion, the police had now received the order of zero tolerance and strict response to the riots.

Cocktails, stones, roadblocks, chemicals, tear gas and flash grenades create another day of war. This time the battlefield is not the center of Athens or Exarchia but P. Faliro. 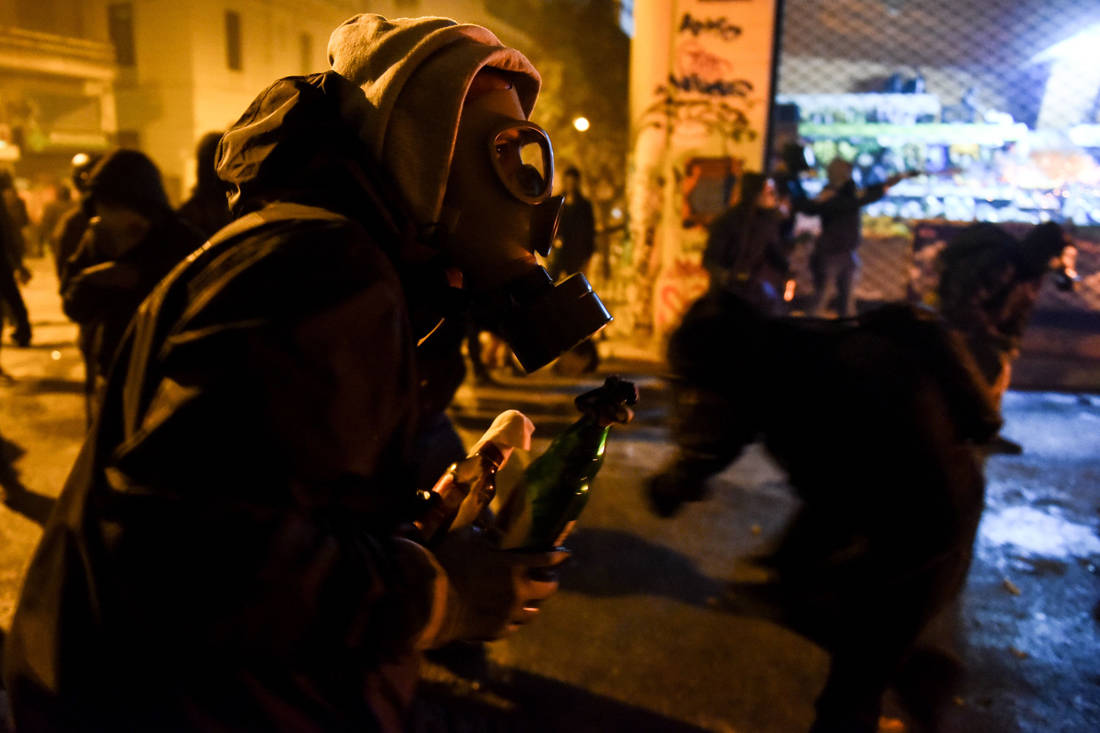 As time went on the intensity of the episodes decreased. At the intersection of Achilleos and Amfitheas streets, a group of about 200 people (mostly students) threw stones at MAT police who responded with limited use of tear gas. Then, suddenly, his motorcycles appeared from Achilleos Street Group “Z”. The drivers stopped, got off, approached the assembled crowd and took out their weapons. After the initial “freeze”, the strongly gathered people responded to this image on the day of the funeral of a child who fell dead from police bullets, and moved against the “Zitades”.

Then, to everyone’s surprise, the police began firing into the air. This incident was also recorded, but this time not by a photographer but by a Mega TV station camera, which was a few meters away from the scene.

As is perfectly normal, the assembled crowd also tried to take precautions in this case, while immediately afterwards, the police officers who starred at the event boarded their motorcycles again and left the area.

According to an eyewitness who analyzed what happened in Mega’s main bulletin, a total of four police officers “Z” shot more than 15 times in the air. Police initially reported a shooting by a Group G policeman, but were later forced to admit that he was probably not the only one who fired but more, and an Investigation into swearing was ordered to determine exactly what he had done happen.

For history’s sake, it should be mentioned that the Welsh headquarters conducted an investigation in both these cases Hellenic Police, with no liability for a police officer.