Mitsotakis: All doctors in the ICU indefinitely 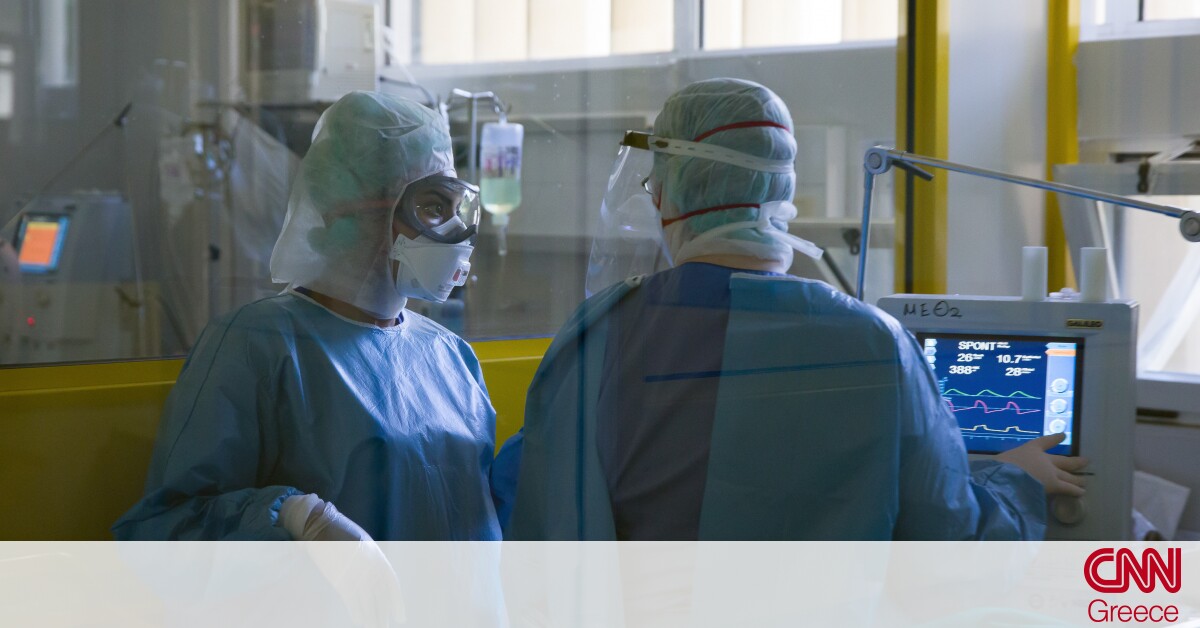 “She’s one commitment for which we had undertaken it all nurses who were employed during this crisis. It extends to all doctors currently working in Intensive Care Units on fixed-term contracts. It is an act of recognition not only of the state of the great work they did during the pandemic, but also an irresistible need for staffing the new Intensive Care Units that have opened in recent months “, said Kyriakos Mitsotakis during his introductory speech.

The First Minister emphasized that “We are in the most critical hours of the fight against the pandemic “I want this message to be heard everywhere today, especially in Northern Greece,” he said, noting that the NSS and its staff will continue to suffer even though they have been operating ” in the red ”for weeks.

Side by side, thanks all of them employees in the National Health System for their work, adding that after the outbreak of the pandemic, the government had placed an increase in staff and strengthened the hospital’s physical infrastructure as a priority.

“These are to restore order and truth,” he added.

With reference to measures taken Against the pandemic, the prime minister indicated that the government will make announcements next week, having more epidemiological data available to it. “Our plans from now on will not refer so much to dates to specific data, which will judge our next steps”, he noted, adding that “the first signs are now for a reduction in the number of cases”.

During the discussion, Mr Mitsotakis underlined its importance public-private partnership to address the major health crisis, but made it clear that protecting public health is an absolute priority.

“Obviously we always prefer to consult the private sector.” But where this is not possible, the state has proved it has other tools available, “he said.

After briefing the Commanders of the seven RFAs, the First Minister noted that the emphasis treatment of coronavirus does not mean that any other patient is transferred to second-class care. He pointed out that as the pressure caused by the pandemic diminishes, hospitals should begin to return to their normal services.

For the national vaccination plan

Referring, at last, to vaccination strategy in 1,018 centers nationwide, Kyriakos Mitsotakis noted that the goal is to implement from January “a very aggressive and aggressive vaccination plan of the vast majority of the Greek population” that will be installed for six months. He explained, however, that this does not allow for complacency.

The following are locations o commanders Health Regions of the country:

20% of free ICU beds in Attica

The manager of the 1st RAE Panagiotis Stathis, in Attica (excluding West Attica and Piraeus belonging to the 2nd RAE), noted that 29 Hospital and two Children, eight of whom are Hospitals reference number, while they were developed and 10 Covid Health Center. The beds available for COVID from the 1st RAE are total 1.191.

According to Mr Stathis, the numbers in Attica indicate that there is stabilization in hospital cases and management. He added, he added. 20% of ICU beds are free, although average bed occupancy is at 58.8%.

An important element, Mr Stathis underlined, is that “we see the flattening in the cases and the variation curve after the lock down having a diminishing course. The forecast says that we will have a reduction of serious cases during the next two weeks. “.

Also, as he noted, Attica kept it in a position where it did not reduce surgeries by more than 40% when there was a complete suspension of surgeries in the first phase of March.

“There is no pressure on the islands”

The manager of the 2nd RAE, Christos Roilos, began by referring to the specificity of the particular Health Region, as it included Western Attica, Piraeus, but also the Aegean islands. As he said, the situation is on the islands right now completely controlled, as there is not much pressure on an island.

Mr Roilos stated that the 2nd RAE currently has a total of 505 COVID beds available, with the possibility of increasing them if necessary. Today’s coverage is about 50% in single COVID beds throughout the 2nd RAE and especially in the land part is 60%. Mr Roilos emphasized, however, that there was considerable pressure on the COVID ICU of the 2nd RAE, which is currently being addressed with the use of beds by the private sector and the continued development of new beds.

High pressure in Thessaloniki – How many beds are available

3rd RAE Manager Panagiotis Bogiatzidis noted that in yesterday’s vigil Papageorgiou Hospital record them 51 imports and 24 suspicious cases were managed, which was a reduction on the previous time of the same on-call hospital when 62 admissions were recorded and a large number of suspicious incidents which then went on to the system.

He himself reported a comment 85% of single COVID beds available but at the same time significant pressure on available ICU beds.

Mr. emphasized. Bogiatzidis said the problem was being addressed by creating new beds. In particular, in August there were 26 ICU beds, which has increased today from 70 beds, to 96 beds in the 3rd RAE in the Thessaloniki area. Also, in the other 3rd RAE hospitals, in the West and Central regions of Macedonia, the beds increased from 6 to 28. In total, from August onwards, 92 new ICU beds were developed in the 3rd RAE.

also, “From 296 beds of the 3rd RAE available to us for the treatment of COVID cases, we reached 1,227, we had an increase of 931 beds” Mr Bogiatzidis noted.

The situation is difficult in Drama, Serres, Halkidiki

4th RAE Manager Dimitris Tsalikakis noted that beyond the current Thessaloniki, there is pressure on his hospitals Drama, των Serres and her From Halkidiki and action is being taken to address it.

According to the information provided by the 4th RAE Commander, the total number of simple COVID beds developed reaches 1,650 and currently occupies 1,191 beds. He noted that there was pressure and steps had already been taken to offload with an increase in total system capacity and private sector participation.

The image in Thessaly

The 5th RAE Manager, Fotis Seretis, in turn, estimated at Larissa a in Volos is currently under intense pressure on the health system, but the situation is under control. The pressure on hospitals has led, on the one hand, to adjusting the burden sharing between NSS hospitals and, on the other, to cooperation with the private sector.

As he said, Larissa General Hospital now accepts only patients with coronavirus while the University Hospital has taken over the surgical sector and obstetric clinic, on a daily basis. At the same time, for two weeks now, there has been voluntary co-operation with two private clinics and links have begun with two other private structures. Mr Seretis estimated, on the basis of the latest data, that the Rt index had fallen in Larissa to 0.95, compared to 1.05 in previous days.

In Magnesia, The transmission indicator is what higher, at 1.17, however, there is a decrease in incoming incidents and an increase in discharges, while links are already being made with two private clinics for a possible increase in admissions. For the dismantling of Volos General Hospital, rapid tests are carried out at the Health Center and in three tents set up in the yard, with the assistance of the army. Mr Seretis added that, in all Thessaly hospitals, ICU beds have been developed for COVID, with the amount of intensive care beds being 83, while initially being 20.

“No patient without care”

6th RAE Manager Ioannis Karvelis said despite the emergency conditions caused by the pandemic no patient will be left without the care of the NSS.

He noted that 529 single COVID beds and 55 ICU beds for COVID were developed in the 6th RAE, while new COVID-specific ICU beds were constantly being added. Mr Karvelis said the total number of ICU beds in the 6th RAE in July 2019 was 65 while today we have reached 129.

The 6th RAE Manager reported an improvement in the situation in Ioannina, noting that the University Hospital of Ioannina can now serve patients who also come from areas such as Grevena, Naoussa and Kozani. Patras University Hospital, in Rio, as well as Pyrgos and Kalamata hospitals have also been strengthened in the 6th RAE. Mr Karvelis also said they were developed at Zakynthos Hospital six ICU beds (when there was nothing before the pandemic). In Corfu, two ICU beds (eight in total) were added while three COVID-specific beds were added.

Fixed the epidemiological picture in Crete

Taking the floor, Commander Lena Borboudaki noted that Crete’s epidemiological profile is in good levels and is observed stabilize in the last days after the rise of the previous weeks.

As he said, 388 COVID-19 beds have been developed in Crete’s eight hospitals, so that coverage is island-wide. He added that there had been an increase in medical staff prior to the onset of coronavirus, with 210 doctors together with 650 nurses and other staff undertaking hospital and Primary Care duties.

Based on the projects underway in many units on the island, the Commander noted that the Crete will have 88 ICU beds – which 56 will be intended for patients with coronavirus. On the collaboration with the private sector, Ms Borboudaki said that the availability of private doctors was being recorded and the first contracts had been signed.