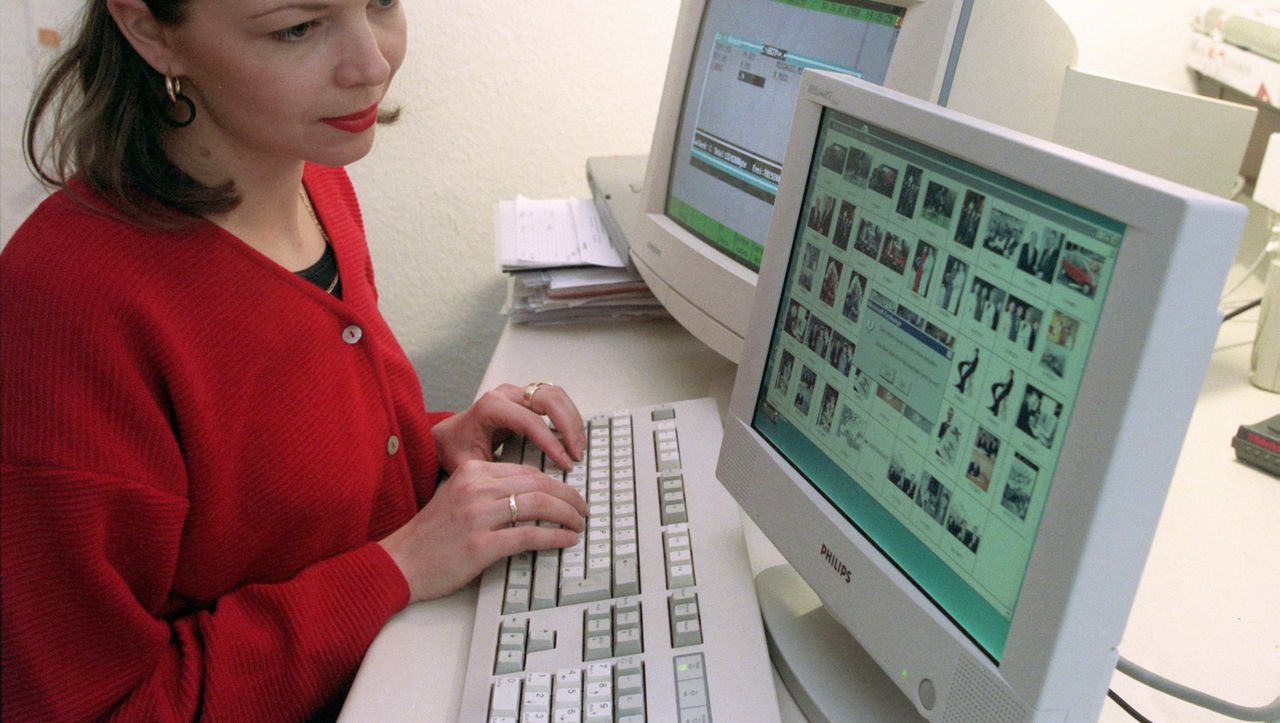 Today, a high resolution flat screen is part of normal office equipment. LCD technology for monitors is only 25 years old and has been reluctant to establish itself. Georg Schnurer reported in “c’t” 6/1994 for a 10.4-inch color monitor with VGA resolution (640 × 480 pixels), which was offered at the time for an impressive 10,000 D-Marks. Prices were unreasonable despite the pathetic resolution and huge reliance on the viewing angle due to the immature LCD production – at that time rejection rates were rumored to be over 70 percent.

During the following two years, the first 15-inch diagonal LCD monitors came to market, and the resolution rose to 1024 × 768 pixels (XGA). At over 6,000 D-Marks, the devices were still very expensive. In the nineties, bulky tube monitors (CRT, Cathode Ray Tube) dominated the desks: good devices with a 20-inch diagonal displayed 1280 × 1024 pixels (SXGA) on a visible screen with an 18-inch diagonal – part of ‘ the screen behind the tube surround.

The beginning was analog

Initially, LC displays were unable to demonstrate their advantage over CRTs – a crisp, flashless display – because they were operated in analogue mode just like CRTs. The manufacturers of the monitor had to re-digitize and synchronize the analog video signals from the graphics card. As a result, many LCD monitors have been broken.

Finally, in Cebit 1998, the first graphics cards with digital signal outputs were introduced in addition to analog outputs. In the same year, LCD monitors tested “c’t” on a large scale for the first time – twenty diagonal devices between 13.8 and 15 inches for 2700 to 4800 D-Marks. Their viewing angles were very narrow – when viewed from the side, the image was milky, and underneath, it was often inverted. We celebrated the apartment displays anyway.

In the comparison test above, we also got our hands on the first fully digital LCD: Siemens-Nixdorf distributed it a custom graphics card, showed 1024 × 768 pixels at a diagonal of just 35 centimeters (13.8 inches) and cost an impressive 3700. D-Mark.

The first pure digital monitor by Siemens-Nixdorf, the MCF3501T, was distributed with a graphics card

We brought the first 18 incher to the lab »c’t« for issue 18/1998. They came from NEC and Eizo and at 8,000 D-Marks cost four to six times as much as a relatively large CRT monitor. We found your screen size to be great, image quality only medium. In the years that followed, prices dropped rapidly, which the supermarket chains also cared for – monitoring offers induced queues ahead of Aldi, Plus & Co. in mid 2001. However, most of the devices used TN panels that were dependent on the viewing angle and which had only analog signal input. It wasn’t until about 2003 that monitors with VA and IPS technology with fixed viewing angles became affordable.

Growing diagonals and above all higher resolutions finally forced the switch to digital input. As with many fundamental changes, this move led to a mix of digital connection options, including P&D, DFP and DVI. For Apple’s own DVI variant ADC, you even needed your very own bulky power supply. In the entertainment electronics segment, the High Definition Multimedia Interface (HDMI) eventually dominated, while the DisplayPort asserted itself in the PC sector. Many PC monitors still have HDMI to this day, and some even have VGA.

Some LCD manufacturers from the outset are still represented on the market today, such as BenQ, Philips and Samsung. But do you still know Belinea, Natcomp or Highscreen?

The change of the backlight was a milestone: instead of cold cathode lamps (CCFL, Cold cathode Fluorescent Lamp), small light emitting diodes (LEDs) illuminated the LCD background from 2006. The manufacturers initially used colorful RGB LEDs in the backlight , which made the monitors extremely colorful, but also extremely expensive.

The first cheap blue LEDs, whose light was turned into “white” light through yellow diode caps, were found in monitors from about 2008. Although the LED backlight has long been commonplace in notebooks, the complete change to the more energy efficient LED technology in PC monitors didn’t happen until after 2010. With the mercury-containing CCFL tubes, the background color faded away, the monitor covers became lighter and the exhibitions even more. fain.

The room is 3D

From 2009 there were 3D interludes: monitors that consumers with red-green glasses, bulky shutter glasses or lighter polarizing glasses could see – and onerous driver settings. In the same year, the format of flat screens changed from 4: 3 or 5: 4 to wide formats such as 15: 9, 16: 9 or 16:10. This was not due to changing consumer viewing habits, but simply to new panel factories: to fully utilize fabs for wide format flat screen TVs, monitoring panels were also produced there.

3D monitors were very well received by »c’t« at the end of thoughts.

Many pixels help a lot

In 2012, the first high-end devices with ultra-high resolution (UHD, 4K) such as the Eizos FDH360 appeared in stores for 25,000 euros, and from 2013, a 4K solution for monitors became more affordable. The initial connection problems soon subsided and prices also dropped rapidly: two years later, 4K monitors with TN panels cost only 500 euros.

Screen diagonals increased with resolution – suddenly 32-inch models with a diagonal of 80 centimeters became possible for the desk. In issue 11/2015, the »c’t« checked whether the cheaper 4K TVs could be converted into large monitors.

From around 2013, extra-wide monitors with 2560 × 1080 or even better 3440 × 1440 pixels came into fashion. Many of them were slightly curved to keep the distance between the screen surface and the viewer’s eye constant. The wide displays were ridiculed at first – today they are indispensable.

In 2015, Apple, Dell and HP introduced the first 5K displays with nearly 15 million pixels, two years later Dell came up with drums with the first 8K monitor with 33 million pixels further doubled. However, such giants are still reserved for a few very expensive devices.

In 2015, gaming fans were also delighted with the first monitors whose image output ran in time with the frames supplied by the graphics card. For Nvidia’s G-Sync, the monitors needed a fan-cooled module that ensured synchronization. For FreeSync AMD, a variant of the Adaptive Sync identified by VESA, there was no need for an expensive module – initially there were no displays for either technology. This camp formation didn’t end until 2019, when Nvidia had an understanding and introduced devices compatible with G-Sync.

In 2017, the USB-C port found its way into monitors as video input. Because it also transfers data and USB power in addition to DisplayPort video signals, the monitors could be used as docking stations for notebooks.

Initially, the high-contrast display was reserved for TV displays until it appeared in PC monitors in 2017. However, the first tests of HDR monitors were sobering – we couldn’t see any difference between the display with and without HDR. VESA did not specify high-contrast reproduction on PC monitors until late 2017 in the DisplayHDR standard.

The next step in increasing contrast was made possible by mini-LEDs, which were now evenly distributed at the back of the display rather than at the edge of the display and could be individually controlled. Asus first introduced the device with countless small LEDs for full-array local dimming (FALD) in 2019 with its 32-inch ProArt monitor with mini-LEDs, and in early 2020 Apple followed suit in this country with the Pro Display XDR. The prices for these high-end monitors – they cost between 3000 and 6000 euros – are the same as those that had to be put onboard for the first LCD monitors in the mid-1990s.

Mini LED backlights will eventually become mainstream in monitors. The alternative to this would be organic displays, but OLEDs will probably not be in monitors for the foreseeable future – scaling to smaller diagonals works very slowly, even in the television sector.

Real LED displays, where each pixel is operated with three light-emitting diodes, on the other hand, could find its way into small, very special and therefore very expensive monitors. Until then, however, LCD technology will dominate the world of monitors for a long time.