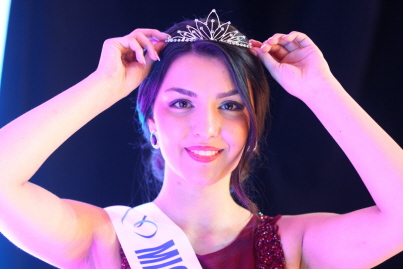 10:45 pm – The "madison" finished, it's time to give this election results. The new loss of Haut-Rhin 2019 is … Léa Nemiri! The young woman, aged 20, cannot believe her eyes. The audience is screaming and the residents of Horbourg-Wihr will be able to congratulate him.

His second prize comes from Riedwhir and is called Julie Meyer. Regarding the second position, our Cloé Dischgand of Pfaffenheim.

22:30.– Lionel has finished singing Johnny and host the evening, Baris Genc takes the hand. "Mulhouse, you like a party? I want to see people dancing madison." It doesn't take more than fifty people on stage to dance.

Before the ruling, where to "Lionel sings Johnny"

09:20.- After the march in a seaside costume, put the vote. As every year, the public's votes will decide on the eight who reach the final, and the jury will have the mission to designate the Miss and its runners. The judgment is expected shortly after 22:30

21h.– The 16 candidates complied with the difficult exercise of presentations in the microphone. This year again, the profiles are varied. They are nurses, social workers, a commercial agent in a vineyard or coming students, distant: real estate agent, agronomist, young children's educator, nurse, baker, physiotherapist, stewardship, bacteriology researcher, pathology technician, judge for children, advertising … All say their love for Alsace, many practice one or more sports diligently … and do not necessarily comply with the stereotypes of the genre. Amongst the disciplines practiced – sometimes in competition – are boxing, motorcycle trials, crossfit or krav maga.

The procession in evening dresses

08:30.- "Shhhhhhtimetime!", Launched with speakers, Miss France. "We take his right hand, his left hand, and everyone tapping, tapping to the rhythm of the music", urging the presenter Paris Genc, ​​who is also the choreographer. The public does not pray: the atmosphere rises suddenly.

The president of the committee Miss Alsace for Miss France, Claudia Frittolini, presents the evening's course: the public will discover at the start of the 16 candidates in evening dresses, then they will march in turn to the microphone to present themselves to the public. After a word from the organizers, put the march in swimming suits, then intermission and interlude music, with Johnny Hallyday's songs.

08:20-Many candidates play this year "at home", or almost: there will be a very good representation in the Agrolo Mulhouse, with two candidates from Mulhouse itself, and three around, Brunstatt, Rixheim and Kingersheim. The other candidates come from all over the department, from the Colmar region to the Sundans through the Rhine strip. Find on the map below the candidates by their original borough.

08:15.- The last viewers arrive and take place at the stalls, which count about 400 places. This year again, we are aiming for an election sold out, confirming the team. Among the aisles, which were overcome by a joyful focal point, there are some nice placards to encourage their favorite candidate, many take the laptops to immortal the night.

20hHello and welcome to MCP Cité de Mulhouse, who again welcomes this year's election of Miss Haut-Rhin. Miss Alsace's Committee to Miss France is here at home: this is the third time in a row to the hall and her team welcomed them.

Find the winners of the competition in previous years