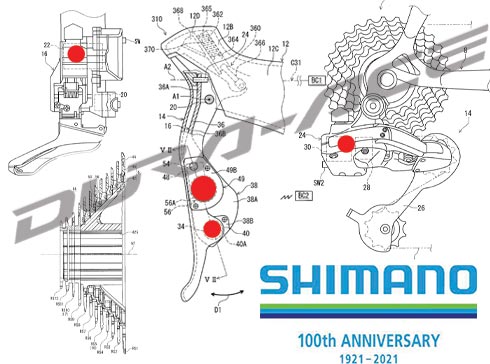 This is undoubtedly the most anticipated novelty of 2021. Many expected the Shimano Dura-Ace set in 2020, but Shimano’s timeline (or pandemic) is probably slated for change in 2021.

Good thing, in 2021, Shimano will be celebrating his centenary, exactly March 23, 2021. Should we expect a presentation from this new group on this date? Nothing is less certain. Professional riders’ bikes will have to be carefully monitored from the first races of the season.

On the other hand, by studying the number of patents issued by the brand in recent years (no less than 35 in 2020 alone), we can assume that the future of the brand will be in 12 speeds and in part wireless.

So yes, Shimano will celebrate its centenary in 2021. In 1921, the brand produced its first freewheel.

Then came the first 3-speed hub in 1957 and the launch of the first Dura Ace group in 1973. Shimano has already put an online site for this centenary where you can find out the major innovations of the brand during this centenary. : https://www.shimano.com/en/100th/

Obviously, this centenary is therefore an important date for Shimano and the release of the new Dura-Ace group would be perfect this year 2021 … or even March 23, 2021. Of course, I contacted Shimano about this, but obviously, the brand is more than unnoticeable, no information leaks.

The first consignments would be scheduled for May.

The main patents relating to the possibilities for the Dura-Ace 2021 group can be found here:

Already, on the reference side, logic would want this group in the future to be the R9200, with several variations as is the case with the current R9100:

Because yes, it would seem from the first echoes that Shimano keeps versions for pad brakes as well as mechanical versions, unlike SRAM which now only offers AXS eTap versions.

Unsurprisingly, this group would have a 12-pinion cassette, just like its Campagnolo and SRAM counterparts. 12 speeds existing in the Japanese brand within the MTB groups, which should require a Micro Spline freewheel body to allow the use of an opinion of 10 teeth and could go up to 48 teeth. That leaves space.

Shimano has already filed a patent in 1996 for 14 pinion cassettes… so why not switch directly to 13 speeds !

Hopefully this change to 12 speeds does not force a new geometry on the wheels, which would also suggest a lack of backwards compatibility with the old wheels.

Nothing says Shimano will go towards the systematic use of a 10 tooth sprocket, especially when we know wattage losses generated by such an opinion. They seem to be moving more towards cassettes retaining an 11 tooth start but by tightening the pins to get less gaps, still offering cassettes of the 11-25 to 11-30 or even offering 11 -32 new.

Therefore, Shimano will avoid the hassle that occurred when switching to 11 gears, which made all older generation wheels completely obsolete.

One thing is for sure, this photo effect made for April Fool’s Day in 2014 and showing a Shimano 12 speed cassette will become a reality in 2021. Count on the picture below, in fact there are 12 cogs!

Shimano seems to be choosing a mix of cordless levers (powered by a button cell) and battery-connected derailleurs.

The lever patent includes several versions that all seem to have the same dimensions and specifications, but Shimano clearly seems to want to continue offering pad brakes on its next-generation Dura-Ace.

The position of the button battery does not yet appear final according to the sketches, either located in one of the stimuli, or in the pressure cooker. A button battery is more than enough for a lever as there is only one electronic wave to send, no motor is playing at this point. The CR2032 button cell battery can therefore easily have autonomy of almost two years.

Note that Shimano mentions a piezoelectric system which could equip these impulses and would serve, thanks to the lever movement, to recharge the battery. Enough not having to take care of any maintenance at this level anymore! This would undoubtedly be a great step forward.

The ergonomics of the levers may be slightly modified, taking inspiration from the GRX models with perfect grip!

Wireless derailleurs .. or not

If the patents still specify battery-powered wireless derailleurs in each derailleur …. I think Shimano will not immediately produce a group whose derailleurs are not connected to a single battery. Why? For autonomy. Currently, Shimano transfers achieve more than 5000km of autonomy. Batteries, especially if compact, cannot reach 1000km, especially for the front derailleur.

In my opinion (which is just my opinion), Shimano will switch to a wireless system the day we can get very small batteries but still offer quite a large range. This will pass:

In the latter case, we could even design a system that recharges the batteries sufficiently that we never have to worry about possible recharges.. Anyway, I firmly believe in a solution like this in the near future (in 5 years).

We will probably stay on wired connection between the derailleurs and a main battery. An acceptable solution, because if SRAM wireless is praised for its ease of assembly due to the complete absence of wires, this only applies to bike fitters or enthusiasts assembling their own bikes … and we’re not dismantling its transmission all day.

Anyway, on the sketches below, the words SW1 and SW2 refer to buttons (Switch) used for matching the stimuli, which proves that the connection between levers and derailleurs would be made without any wire.

Shimano has always adhered to aluminum cranksets (although a very limited series Dura-Ace carbon has emerged) and the new series should be no exception.

Aluminum now makes it possible to get very light cranksets that are at least as rigid as the carbon versions.

With the single chain seemingly more than a niche market, this new Dura-Ace should not be offered this option. The Ultegra R8100, in 2022, may benefit from a 1x version, but then again, it all depends on the market demand for this type of product … and honestly, I don’t believe it too much.

Aesthetically, I hope Shimano’s changes are more innovative than the design of the R9100 series. For me, the R9000 series was undoubtedly the most desirable with its two-color aluminum and black color scheme. The black R9100 version to my taste is too close to the Ultegra series, too shy!

What do you want?

But what do you really want? Shimano will undoubtedly not only offer a 12th sprocket on his future Dura Ace, content to be a “follower” of Campagnolo and Shimano.

No, Shimano should go much further. We are thinking, of course, probably of the semi-wire and perhaps a system of recharging the batteries in the levers, through a piezoelectric system.

On the other hand, it is essential that Shimano improve the disc brake system, which often produces parasitic noises, no more than in competition. The brand should easily be able to offer disc brakes that no longer cause any problems at this level.

Finally, the brand could take advantage of what this generation has to offer new Syncro-Shift options for semi-automatic optimized gear changes.

One thing is for sure, everyone who loves appliances is waiting for this vintage 2021 Dura-Ace group. The new Dura-Ace group is still an event on the cycling planet and Shimano has rarely disappointed.