In Reims, a woman was wounded on the side of the 27 yellow vests 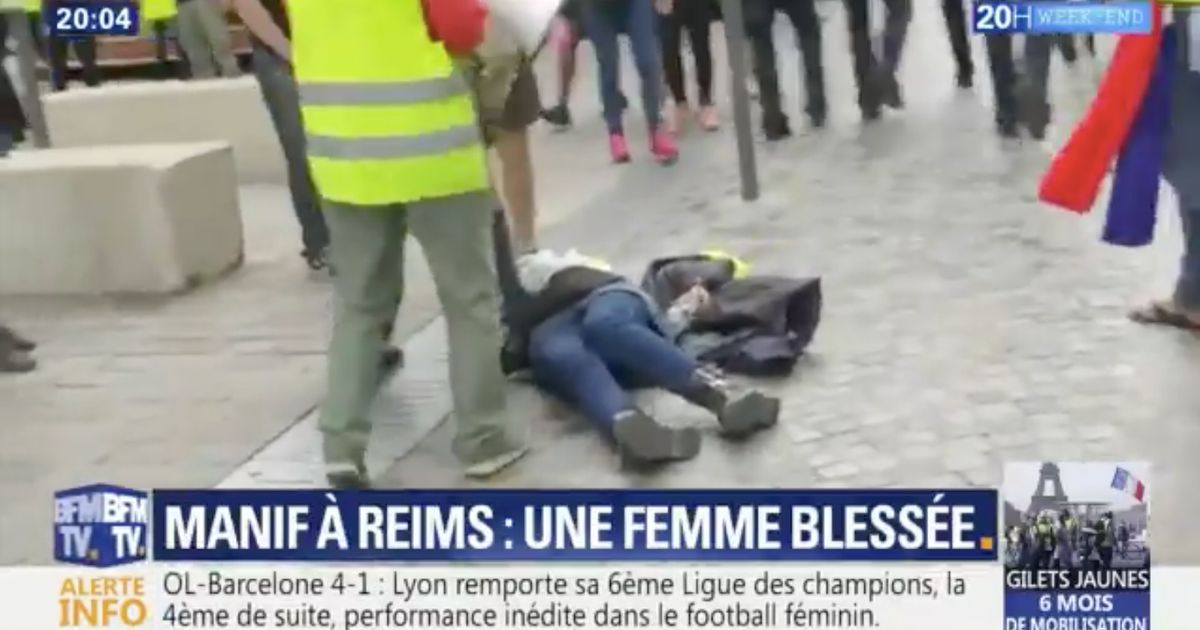 YELLOW GAMES – For Reims mayor, this Saturday, 18 May was a "black day". A "national call" to the city exhibition for the 27 law of firing yellow vests, marked by conflict and lots of compensation was launched.

A woman was injured on the side of the incident, and in the hospital briefly. At the age of 50, she was taken to Reims University Hospital "with a small wound to the head", according to information sent by the Marne sermon to franceinfo.

On images broadcast by BFMTV, we see this woman falling into the ground when she crosses a dozen police and parade without hurry. After falling, one of the officers spanned him, looked at him briefly, before resuming his way as the rest while "doctors on the street" supported the protester.

Back from @BFMTV and the journalist @a_forestier on the film filmed in the afternoon: pic.twitter.com/Aa4rVZA7Cc

The streaming television channel found this woman on her way out of the hospital where she was cared for. She's ensuring that a police officer "deliberately hit her with her shield". "It's totally dark in me," he said. I was bleeding at the head level, I had to be worried ".

"I'm very stupid, I can't believe he didn't think more," he said again, ensuring that you have no negative assumptions about the police: "I'm a retired police officer wife, I'm not at all in this perspective ".

Interview of the person who fell on the ground in Reims: pic.twitter.com/JMUrROr9pX

A friend of this woman, who took part in the demonstration, witnessed in the French microphone 3 Champagne-Ardenne. "I witnessed a free act of violence by CRS," he said. "The police officer in front of me saw me, I walked, and as soon as I walked I saw that my friend had been thrown into the ground by the next policeman's shield," he said. said this friend.

The day was particularly busy this Saturday in Reims, where 1000 people protested according to the prefecture and about 2000 according to AFP journalist.

According to the prefect of the Marne, a hundred "black cutters, black blocks and vests had their radicalization" present. Many windows, twenty according to the town hall, have been vandalized, degraded in street furniture and fire bins, have found journalists from AFP.

A dozen "gifts" have also broken the windows of France's building Bleu, without making any injury. About 17:30, "passing in front of Blue France, some exploded from the cutters at the top of the parade all the windows outside the station. The terrorists left as fast as they came," AFP said t Sylvie Bassal, chief editor of France Bleu Champagne Ardenne. "At the station, there is a feeling of anger that dominates. It's so easy to explode!"

Our radio, France Bleu Champagne-Ardenne, has been vandalized.#Reims#giletsjaunes#ActeXXVIIpic.twitter.com/3Y8539h1f6

Culture Minister Franck Riester has given Radio France's “support to teams” in a message on Twitter. "Unbearable attack on the property of @fbleuchampagne. Those who take part in these actions are enemies of democracy. One solution: soundness!", Wrote.

Intangible attack in the building @fbleuchampagne. Those who take part in these actions are enemies of democracy. One solution: soundness! Support for teams. @radiofrancehttps://t.co/am7fZl61N1

"The vandalism of the French radio station Champagne Lighting is unacceptable, it is definitely condemned and gives my full support to the employees that ensure this vital mission of public service. T local Sibyle Veil.

Radio station vandalism @fbleuchampagne unacceptable, I condemned it strongly and give my full support to the employees who provide this essential mission of #ServicePublic proximity. https://t.co/vI0x1oISW1

He broke a conflict between the protesters and the police who used tear gas. Twelve people were arrested, according to the prefecture.

The Mayor of Reims, Arnaud Robinet, expressed his "anger on the behavior of the terrorists who were present at the event," addressing his "thoughts" to Remois, traders, enforcing the law and France's Bleu teams. "To attack the press is an attack on democracy," he added.

See also on The HuffPost :